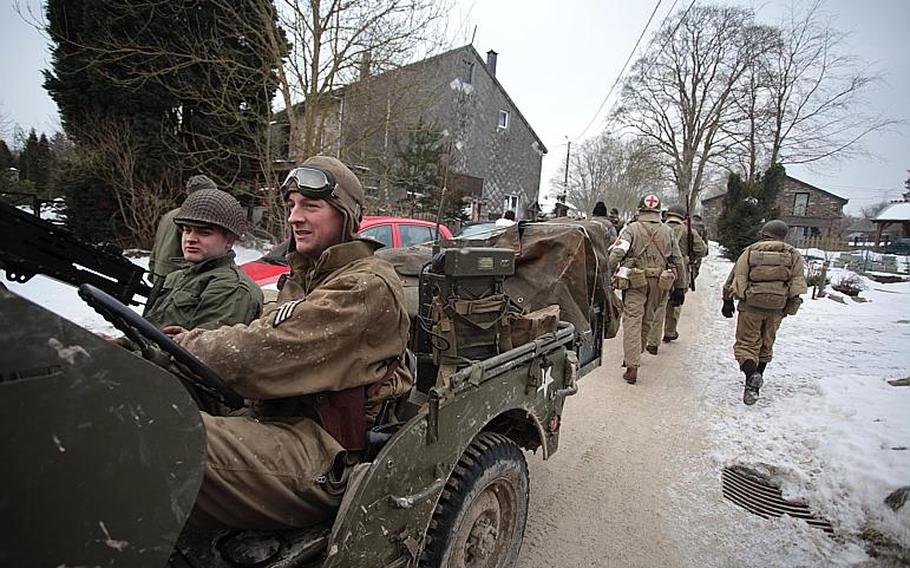 Re-enactors march down the road outside Basse-Bodeux, Belgium, as a jeep zips by in the other direction during the annual In the Footsteps of the 82nd Airborne Division walk on Feb. 23, 2013. This year, the walk starts in Bra, Belgium, honoring the unit's 504th Parachute Infantry Regiment. Matt Millham/Stars and Stripes (Matt Millham/Stars and Stripes)

Just days after the Germans launched the surprise attack that would come to be known as the Battle of the Bulge, a battalion of the 82nd Airborne Division’s 504th Parachute Infantry Regiment was called in to plug a major hole in the Allies’ defense.

After successfully routing the Germans in bloody hand-to-hand combat to retake the bridge over the Ambleve River at Cheneux, Belgium, the regiment’s bloodied 1st Battalion and a company from the regiment’s 3rd Battalion were temporarily pulled off the front line to secure Allied positions in and around the town of Bra.

It is here that the 32nd annual march “In the Footsteps of the 82nd Airborne Division” will start Saturday at 9 a.m., retracing the steps of the 504th during the Battle of the Bulge.

“Last year we had about 1,200 people,” Lacroix said. “We expect to have the same thing” this year.

Registration for the event is 6 euros. The price includes logistics support, hot soup for lunch, a souvenir certificate, hot wine at the end of the march, insurance and medical support.

The start is in Bra at Bras-sur-Lienne. For more information, email Lacroix at emile.lacroix@skynet.be.