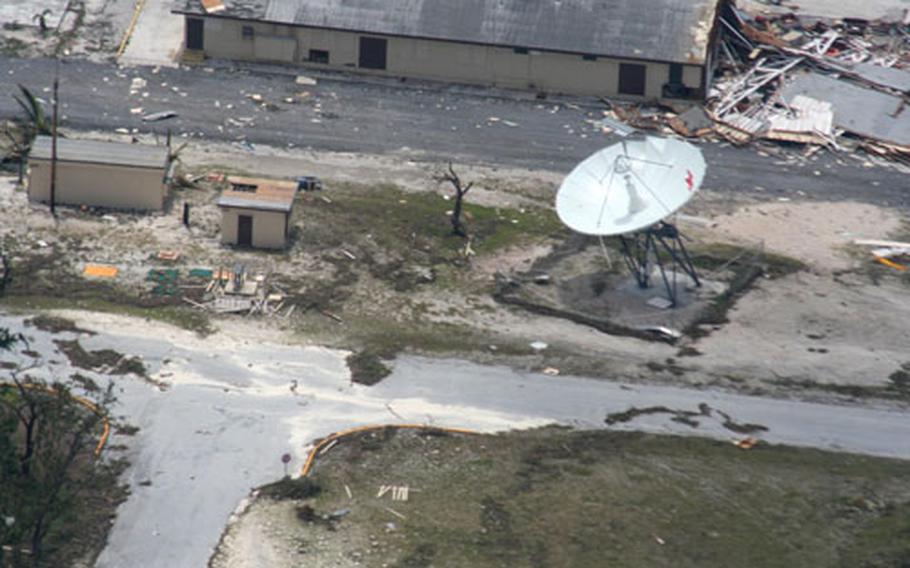 A photo taken over Wake Island during an aerial assessment by the Coast Guard shows buildings damaged by Typhoon Ioke. The overall toll of the storm was not as great as had been feared. (U.S. Coast Guard)

A photo taken over Wake Island during an aerial assessment by the Coast Guard shows buildings damaged by Typhoon Ioke. The overall toll of the storm was not as great as had been feared. (U.S. Coast Guard) 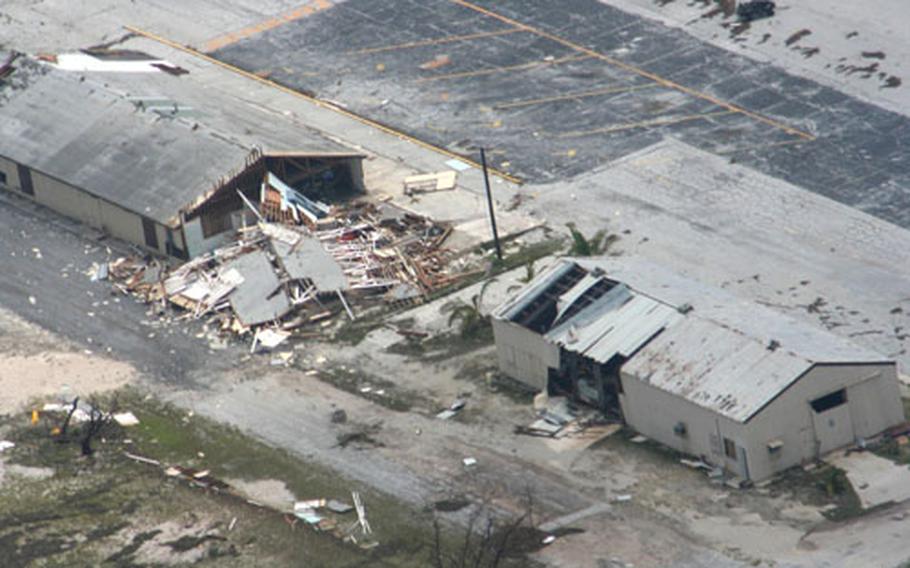 Forecasters feared that anything not made of concrete would be destroyed on Wake Island, but Typhoon Ioke apparently spared the 2.5-square-mile island of catastrophic damage. (U.S. Coast Guard)

CAMP FOSTER, Okinawa &#8212; The super typhoon that pummeled Wake Island last week with up to 155 mph winds caused less damage than was expected, military officials said Tuesday after reviewing an aerial assessment of the atoll.

Officials had feared Ioke would cover the runway in debris, level buildings and take above-ground fuel tanks out to sea when it hit Thursday, he said.

The peak elevation on the island is about 20 feet, and forecasters had predicted a storm surge of 50 feet.

Forecasters feared that anything not made of concrete would be destroyed on the 2.5-square-mile island, which is home to a small U.S. military detachment and airfield.

Nearly 200 people &#8212; all of them servicemembers, Defense Department civilian employees or military contractors &#8212; live on the island and were evacuated to Hawaii last week.

An aerial assessment done by the U.S. Coast Guard over the weekend found the runway to be clear, with fuel tanks and vehicles still in position and buildings mostly intact, though some sustained considerable roof damage, Maroon said.

There also were no observable oil or other hazardous material spills, according to a statement from the Coast Guard. About 3 million gallons of aircraft fuel is housed on the island.

Andersen sent a small group from the 36th Contingency Response Group and the 36th Civil Engineer Squadron by sea Monday to further assess the damage on the ground. Members from the Coast Guard Pacific Strike Team also will be on the island.

Both were expected to arrive Thursday.

Maroon said a preliminary assessment of the integrity of the airfield runway will be the Air Force&#8217;s first priority. A team will drill holes in the runway to see if any water seeped underneath and changed its structure.

The response teams also will check out facility damage and the availability of electricity.

A Navy helicopter will be shuttling the team and equipment between the island and the ship, where people will stay during what is expected to be a weeklong process, Maroon said.

It remained unclear Tuesday what will happen to the base. Maroon said officials with Gen. George C. Kenney Headquarters at Hickam Air Force Base, Hawaii, will decide &#8220;the need and urgency of making it an operational base again.&#8221;

Ioke has been downgraded to a tropical storm, and the Joint Typhoon Warning Center is forecasting that the storm will move northward and won&#8217;t hit Japan, a change from what was projected earlier.