VRC-40 ‘Rawhides’ provide a ‘lifeline’ to sailors at sea 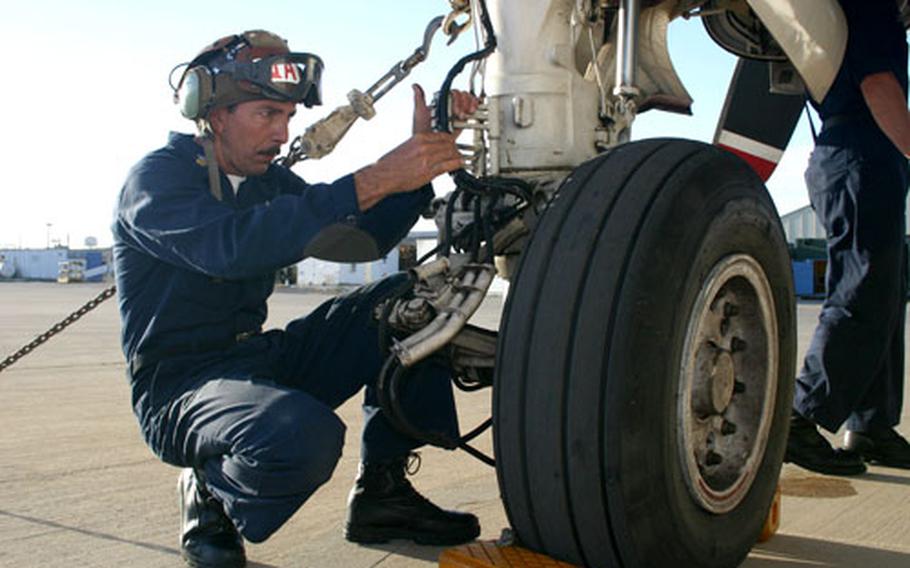 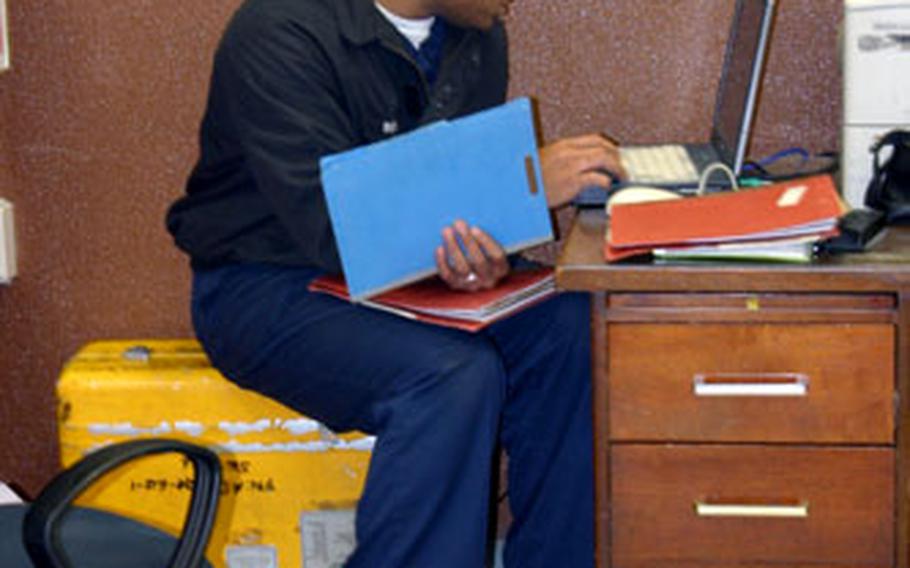 Petty Officer 2nd Class Daniel Richey, a parachute rigger for VRC-40, finds a corner in a hangar at Naval Station Rota, Spain, to update the inventory on flight equipment for the 300 sailors within the squadron. (Sandra Jontz / S&S) 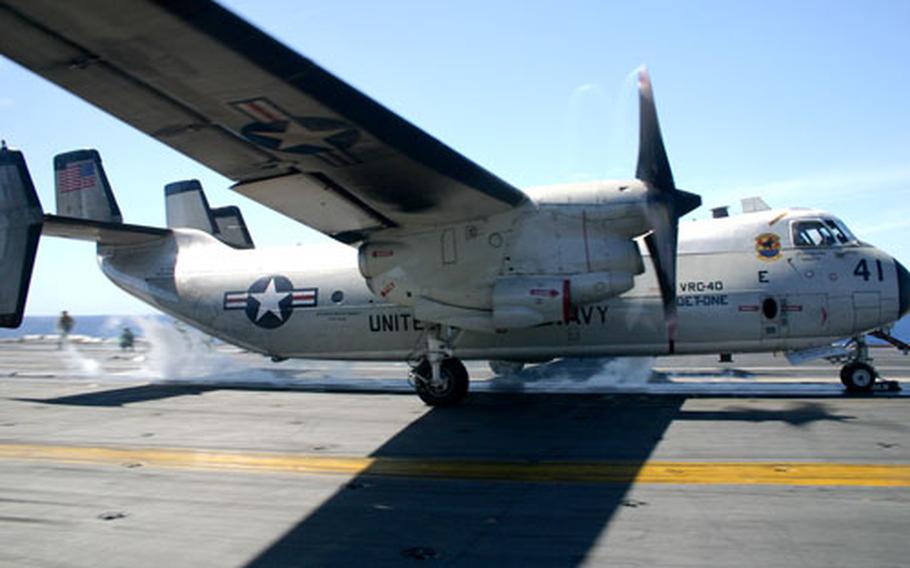 A U.S. Navy C-2 Greyhound launches from the aircraft carrier USS Theodore Roosevelt on Saturday after dropping off visitors, mail and supplies to the ship as it sailed in the Mediterranean Sea. (Sandra Jontz / S&S) 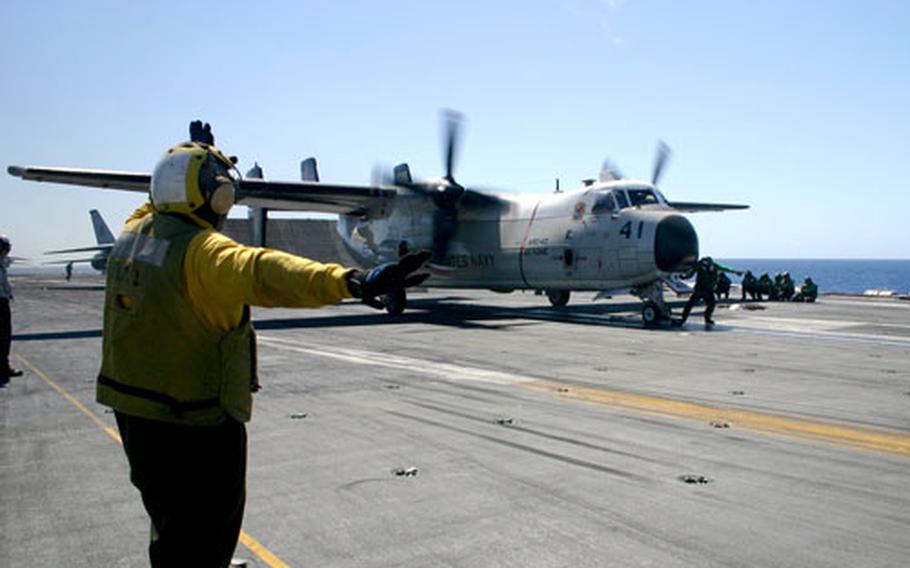 ABOARD THE USS THEODORE ROOSEVELT &#8212; Welcome to the world&#8217;s greatest roller coaster ride.

At least that&#8217;s what Petty Officer 1st Class Jerry Overton likes to call the moment in which the C-2 Greyhound is catapulted off of the lip of an aircraft carrier with a force that nauseatingly launches the aircraft from 0 mph to 130 mph in a mere 2.5 seconds.

Just as you&#8217;re thinking the snap force will leave the imprints of the safety harness permanently tattooed on your torso, the plane seems to drop as though surely plummeting to the sea several hundred feet below. Just as quickly, the propeller aircraft seems to lift &#8212; or so you hope.

&#8220;We&#8217;re the lifeline to the aircraft carrier,&#8221; Overton, 33, said of their mission to deliver such things as airplane engine parts, distinguished visitors and the much-sought-after mail.

But they are the most overlooked and underappreciated &#8212; at least outwardly &#8212; squadron attached to a carrier strike group, the sailors lamented in interviews.

The C-2 chases the carrier strike groups during deployments &#8212; hopping from one land-based installation to another. They can&#8217;t take off or land on aircraft carriers at night, and their plane takes up too much room onboard to remain for any length of time. So that means the crew gets to sleep in hotels, eat at restaurants, and &#8220;actually get to see the world,&#8221; she said. &#8220;The lifestyle is really rather wonderful,&#8221; said the 27-year-old pilot.

Then again, they work usually a minimum of 12-hour days and, if they&#8217;re lucky, get off one day a month during deployments, said Chief Petty Officer Kurt Bartelt.

On deployments, crews work out of someone else&#8217;s home. Like Petty Officer 2nd Class Daniel Richey, 27, who Monday found a corner in a hangar at Naval Station Rota, Spain, to update the inventory on flight equipment for the 56 sailors within the squadron. Finding a sliver of empty desk space, he propped his computer in the hangar office and balanced ledgers in his lap.

But the sailors count their rewards when they can.

On Sunday night, for example, Jim Letourneau strummed his guitar as Chris Cusson sang to what they described as a pleased crowd at the local bar Los Arcos in Rota, and got to &#8220;jam it up&#8221; with the locals.

For the petty officers first class, this deployment will be their last together, and the long-time friends hope that, as they hop bases throughout the Mediterranean on their way to the Persian Gulf, they can compile what will be tantamount to their &#8220;swan song&#8221; they&#8217;ll record upon returning the Norfolk.

For Lt. Cmdr. Joel Becker, the squadron officer in charge, the reward comes in the guests he ferries to the carrier, guests such as terminally ill 9-year-old Timmy, who a few years ago had expressed through the Make-A-Wish Foundation a desire to land on an aircraft carrier.