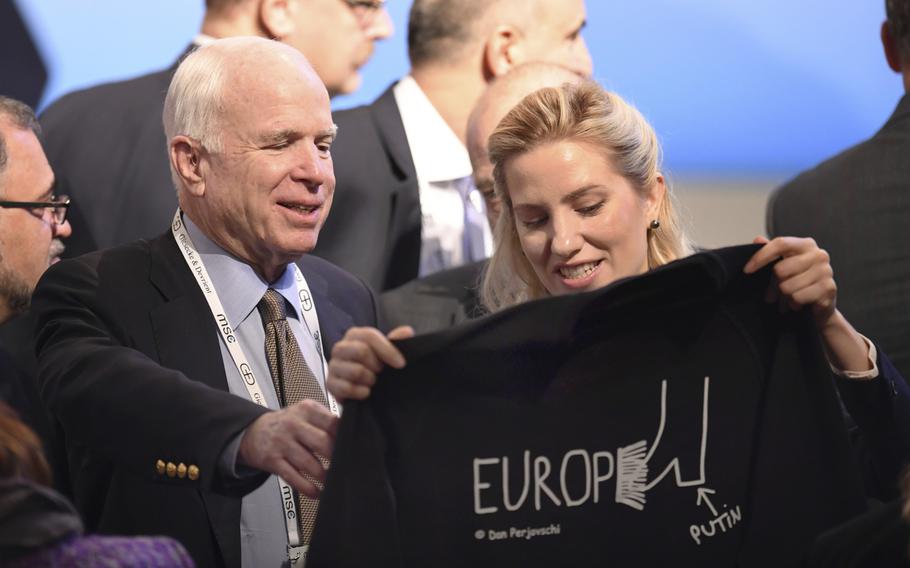 U.S. Senator John McCain, left, smiles as he gets a t-shirt by Ukrainian journalist and politician Svitlana Zalishchuk on the last day of the Munich Security Conference in Munich, southern Germany, Sunday, Feb. 19, 2017. (Tobias Hase/dpa via AP)

MUNICH — A U.S. effort to assure allies here about America’s commitment to Europe fell short of quelling fears that the new Trump administration represents a radical shift in how Washington will approach the Continent, amid worries that American security guarantees are now a chip on the bargaining table.

Yet the U.S. delegation couldn’t escape President Donald Trump’s shifting stances on NATO, threats about the need for members to pay up and a new warning last week from Mattis that the U.S. could “moderate” its support for allies should members not pick up the pace of their defense spending.

“We should hope for the best, but prepare for the worst,” German Foreign Minister Sigmar Gabriel said in Munich.

There is a general consensus in Europe that allies should dedicate more resources to defense, but there are mixed views on how much and how fast. Disagreements in the year ahead could tear at NATO’s political unity and thrust allies into confrontation with Trump, who on the campaign trail tied security guarantees to allies paying more.

Meanwhile, Pence also failed to address Trump’s views on the European Union, which is under strain from within and was derided by Trump in recent months.

Trump’s praise of Britain’s vote to leave the EU has stoked fears he could be active in the support of various populist movements in Europe that seek to weaken the bloc.

“If he did that, it would amount to a kind of non-military declaration of war. It would mean conflict between Europe and the United States,” conference chairman Wolfgang Ischinger told German media on the sidelines of the annual conference.

While Pence sought to calm Europe’s jitters, saying the U.S. will hold Russia to account, Trump’s rhetoric, unpredictable style and a sense of disorder surrounding his opening month in office has allies on edge.

“There is some anxiety in this room in case you missed it,” said Jane Harman, director of the Woodrow Wilson International Center for Scholars, who moderated a panel inside the assembly hall at the Bayerischer Hof hotel.

Pence was “comforting… but a lot of people want to know from President Trump what his positions are,” Harman said.

Sen. Lindsey Graham, R-SC, scolded Trump for not taking a tougher stance on Russia and failing to make clear Moscow’s role in the U.S. presidential election.

“My biggest concern with President Trump is he has never looked the camera in the eye and said… ‘I am the leader of the free world and they will pay a price for playing a role in our elections,’ ” Graham said.

Graham said he expects lawmakers to introduce more sanctions on Moscow. That would be a test for Trump, who has said he wants closer relations with Russia.

“2017 is going to be a year of kicking Russia in the ass in Congress,” Graham said.

Moscow, however, took a softer line on the U.S. than in recent years in Munich, where Russia’s top diplomat typically offered tough words on Washington.

Russian Foreign Minister Sergey Lavrov left the door open to political and military cooperation in a sign that the Kremlin remains hopeful it could collaborate with the Trump administration.

For NATO, its ability to meet new U.S. demands that allies establish a clear roadmap to reaching defense spending targets of 2 percent of gross domestic product, appears the most obvious way to dodge a confrontation with Trump.

Dutch Defense Minister Jeanine Hennis-Plasschaert said allies are already moving in the right direction, having received a “wakeup call” after Russia’s 2014 intervention in Ukraine. “We understand freedom has a price,” she said.

Gabriel, the German foreign minister, was less persuaded about the need for Europe to ramp up spending. He noted that Greece is one of five NATO members that meet spending goals, and yet its economy is on the brink of collapse.

“Will that lead to more stability in Greece?” Gabriel asked.

“I don’t know how we (Germany) could achieve that (2 percent) figure in the short term. We should go for the general objective, but we should not make the mistake of a new arms race, which wouldn’t guarantee security,” Gabriel said.

U.S. Senator John McCain, who delivered perhaps the best received speech in Munich, railed against isolationism in a talk that didn’t mention Trump by name.

“I know there is profound concern across Europe and the world that America is laying down the mantle of global leadership,” McCain said. “I can only speak for myself, but I do not believe that is the message you will hear from all of the American leaders who cared enough to travel here to Munich this weekend.”

After his speech, when asked directly about Trump, McCain quipped: “I move we adjourn.”