Vowing to 'stay the course,' Kelly takes helm of CNFJ 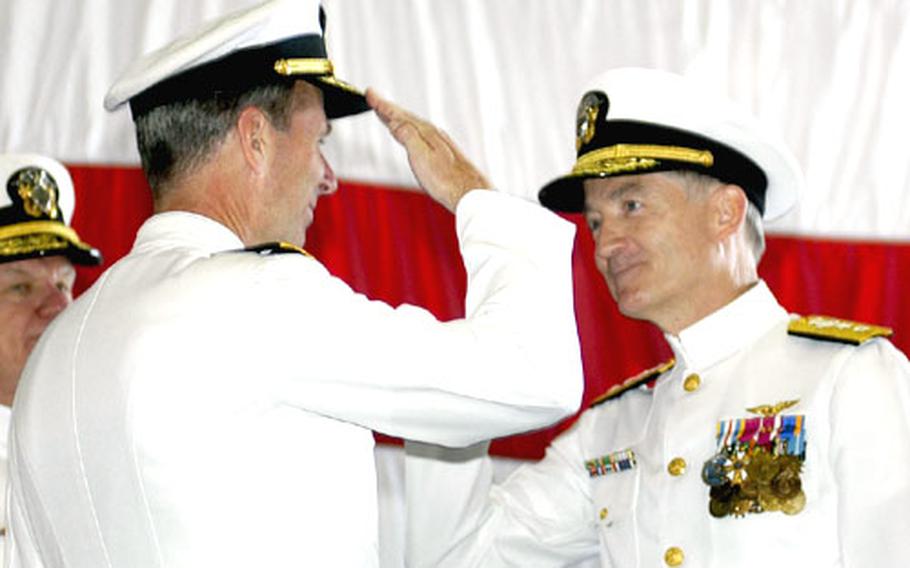 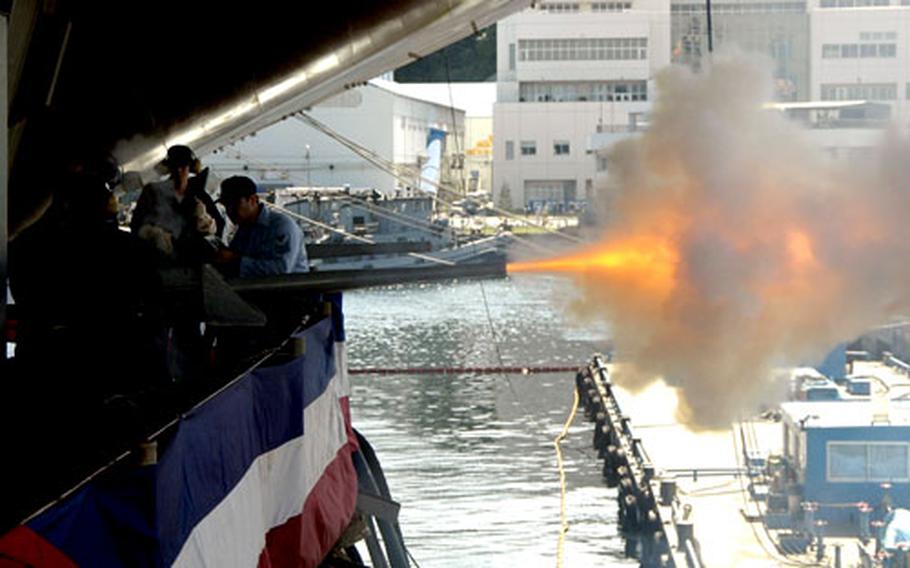 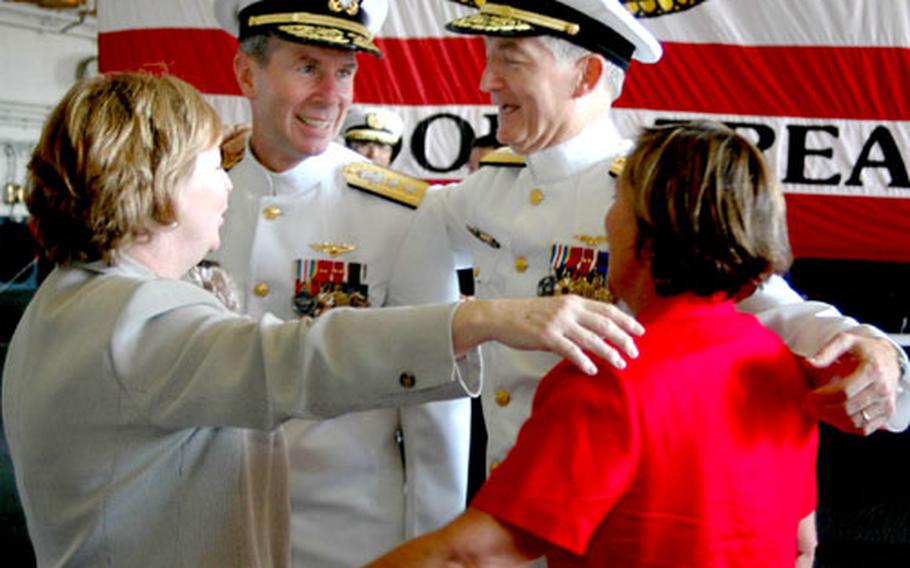 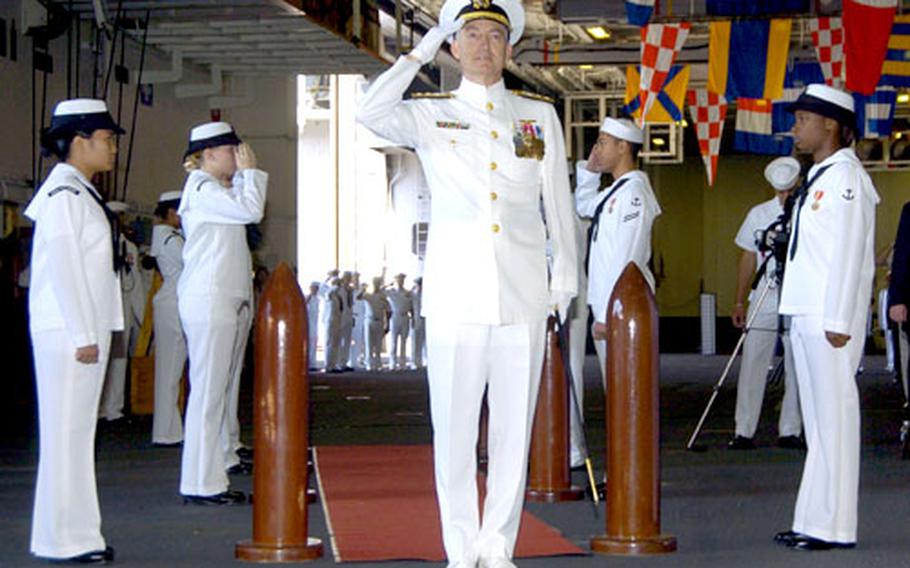 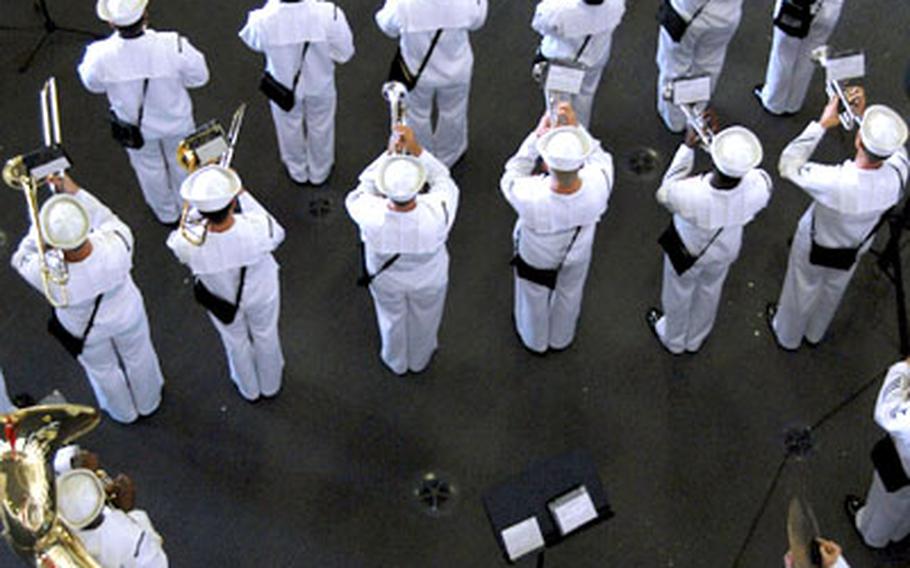 YOKOSUKA NAVAL BASE, Japan &#8212; With the raising and lowering of a flag, Rear Adm. Frederic R. Ruehe handed over command of Naval Forces Japan on Thursday to Rear Adm. James D. Kelly in a ceremony aboard the USS Kitty Hawk.

Roughead said any change of command always entails an eager new officer waiting to take command and a more somber one &#8220;reluctant to let go of that gift.&#8221;

In his speech, Roughead first commended the strong relationship between the U.S. Navy and the Japan Maritime Self-Defense Force.

He praised Ruehe for bolstering that tie along with relations with Japanese communities and leaders. Ruehe has said accomplishments of his tenure include negotiating land-return agreements, befriending many local politicians and improving bilateral training and cooperation with the Japanese maritime forces.

Mayors of several cities that host Navy bases attended the ceremony, including Sasebo Mayor Akira Mitsutake. In addition to Yokosuka, Ruehe has served in Sasebo and on Okinawa.

Roughead presented Ruehe with a Legion of Merit with a gold star for his &#8220;visionary leadership,&#8221; resourcefulness and efficiency, and presented Ruehe&#8217;s wife, Cathy, with a meritorious public service award.

While in command, Ruehe helped administer the Navy&#8217;s conversion of shore commands to a streamlined, centrally organized installation command.

He praised his chief of staff, command master chief and commanders of the installations making up CNFJ: fleet activities Yokosuka, Sasebo and Okinawa; Atsugi and Misawa naval air facilities; and Naval Support Facility Diego Garcia. The command also provides shore services and support for the 7th Fleet and Pacific Fleet.

In his speech, Kelly outlined his three future priorities: increasing manpower in the shore commands, working with the Japan Maritime Self-Defense Force and aiding the Navy&#8217;s transformation plans.

Kelly is the 30th person to hold the position of commander, Naval Forces Japan.

Ruehe will assume command of Navy Region Mid-Atlantic, based in Norfolk, Va.