Voters swarm to polls in 'Triangle of Death' "We all belong to Iraq," said Sheik Abdulla Hamid, 58, a member of the Qarghuli tribe, as he waited in line to vote. "All our tribes are one tribe." (Anita Powell / S&S) 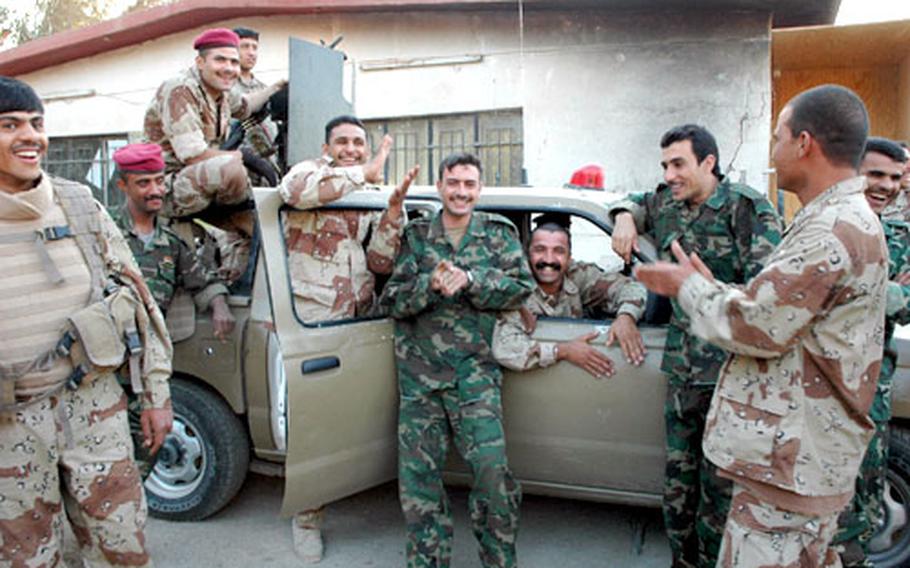 Brig. Gen. Mahde Allami, 55, holds up his ink-stained finger after voting in Al-Rasheed. While he didn&#39;t disclose which party he chose, he said he felt defense would have to be a priority for the new government. (Anita Powell / S&S) 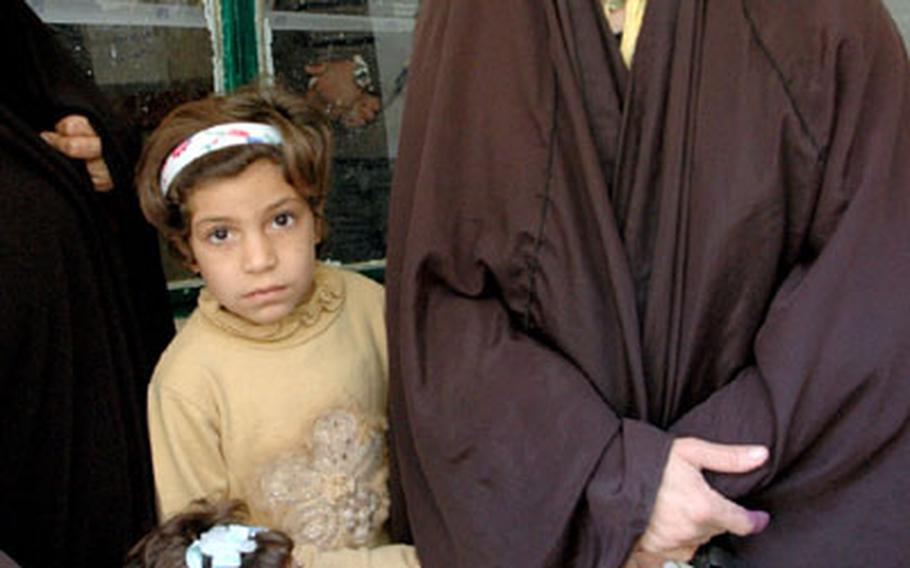 Khawla Hadid Ismael, 34, brought her two daughters and son with her to the polls. (Anita Powell / S&S)

Early estimates were that 70,000 people had participated in the election.

The strict curfew and driving ban contributed to an eerie, Christmas-morning feeling on the area&#8217;s major roads.

American civil affairs officials said that free elections represented a huge leap forward for the area, which did not participate in January&#8217;s elections.

As of Thursday evening, no major incidents or casualties had been reported in the area.

Minor blips were reported &#8212; several voters complained that they were registered at the wrong polling site, election workers at one site asked for food and at another, complained that the driving ban and road closures made it next to impossible for voters to reach the site.

A day earlier, two American convoys were targeted, one by indirect fire, the other by a roadside bomb.

On Thursday, long lines snaked around the area&#8217;s polling places.

At one polling station in the village of Mullah Fayad, voters queued patiently near a road that bore a Jacuzzi-sized hole left in the past by a roadside bomb.

At another polling station in Jarf Al-Sakhar, voters milled about casually on a road pock-marked with bomb holes.

Inside the polling station, men lined up single-file and waited quietly to be admitted into small, unlit classrooms with cardboard polling booths.

In the tribal village of Jarf Al-Sakhar, election workers had strung plastic election tape from the ceiling, as if they were party streamers, inside one of the polling rooms.

&#8220;I am refusing all Sunni and Shiite. We all belong to Iraq. All our tribes are one tribe,&#8221; said the sheik, Abdulla Hamid, a member of the Qarghuli tribe.

At another polling station in the town of Lutafiyah, Khawla Hadid Ismael beamed as she emerged from a polling room, her three young children in tow.

Many in this Sunni-heavy area voted for party 618, a Sunni party.

All voters said their top concern was security, both on election day and beyond.

The 4th Brigade, 6th Iraqi Army Division commander, Brig. Gen. Mahde Allami, said that he was pleased by the security provided on election day by his brigade, the so-called &#8220;Desert Lions.&#8221;

&#8220;This is a clear message to the terrorists and the evil forces,&#8221; he said through an interpreter.

&#8220;By the great effort of the Desert Lion soldiers, they secured the area and people came with confidence.&#8221;

But, he said he could not have accomplished such a feat without help from American forces.

Mahmudiyah city council member Abdul Zahra Muhammad Ali, 50, was on hand to receive ballots at a polling site. Abdul, dressed entirely in black and accessorized with a constantly worried expression, said he had high hopes for election day.

He opened his mobile phone to show an on-screen photo of a serious-looking young man in a blue dress shirt.

The young man, Abdul explained, was his 21-year-old son, a security guard who was killed in a November car-bomb attack on a hospital in Mahmudiyah.

The nearly 2-mile-long line of vehicles, carrying nearly 1,000 people, snaked its way along, often slowing to a terrifying snail&#8217;s pace, from a warehouse west of Baghdad, down several desolate freeways to polling sites.

Not a single shot was fired at the convoy, which contained members of the Iraqi police and army, as well as several tense U.S. soldiers from the 2nd Brigade Combat Team, 101st Airborne Division.

U.S. soldiers working with Headquarters Company, 4th Brigade, 6th Iraqi Army Division said that a prominent insurgent group called off all attacks for several days, in order to allow Iraqis to participate in the election.

When asked how they felt about the election, the Iraqi soldiers broke into song and dance, clapping their hands, linking arms and laughing exuberantly as amused American soldiers watched.