Votel warns Iran against provoking US Navy in Persian Gulf 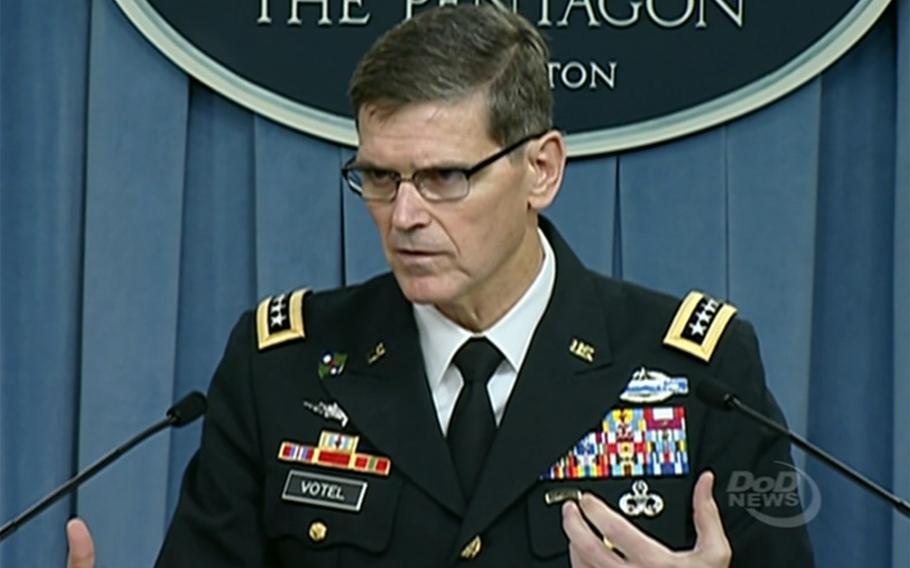 Gen. Joseph Votel answers a question during a press briefing at the Pentagon, August 30, 2016. (From a DOD video)

WASHINGTON -- An uptick in recent provocative behavior toward American military vessels by a faction of Iran’s naval forces could lead to an international incident in the Persian Gulf, Gen. Joseph Votel warned Tuesday.

The U.S. Central Command chief blamed a hard-line group of Iranian naval commanders for the vast majority of recent “unsafe and unprofessional” incidents in international waters.

About 90 percent of the interactions were carried out by vessels of the Iranian Revolutionary Guard Corps Navy, which is controlled by hard-line, anti-American clerics around Supreme Leader Ali Khamenei, Votel said. The United States is less concerned about actions by the regular Iranian navy, which are typically normal.

“The big concern here is miscalculation,” Votel told reporters at the Pentagon. “… If they continue to test us, we are going to respond, and we are going to protect ourselves and our partners.”

In the incident with the Squall on Thursday, shots were only fired after other standard de-escalation methods -- including firing warning flares and attempting to make radio contact – failed, Pentagon Press Secretary Peter Cook said.

If such a confrontation, which can escalate in a matter of seconds, were to develop further, the American sailors would “prevail,” Votel said.

“I’m very, very confident of that, and we certainly don’t want that to come to pass, and that’s why I call on them to act in the professional manner that they espouse to act,” he said.

Votel has seen such Iranian actions up close. In July, the general was aboard the USS New Orleans, a San Antonio-class amphibious transport dock, cruising the Strait of Hormuz when Iranian boats approached quickly in an “aggressive manner.”

In December, Iranian ships fired rockets near U.S. warships in the Strait of Hormuz and flew an unarmed drone over the aircraft carrier the USS Harry Truman. In January, the Iranian navy captured 10 U.S. crewmembers from two American patrol boats that strayed into Iranian waters and held them overnight.

“Iran’s actions in the (Persian) Gulf are unlike anyone else’s,” Votel said Tuesday. “No one else does what they do – go out and drive fast boats towards military vessels. Nobody else does that in international waters.”