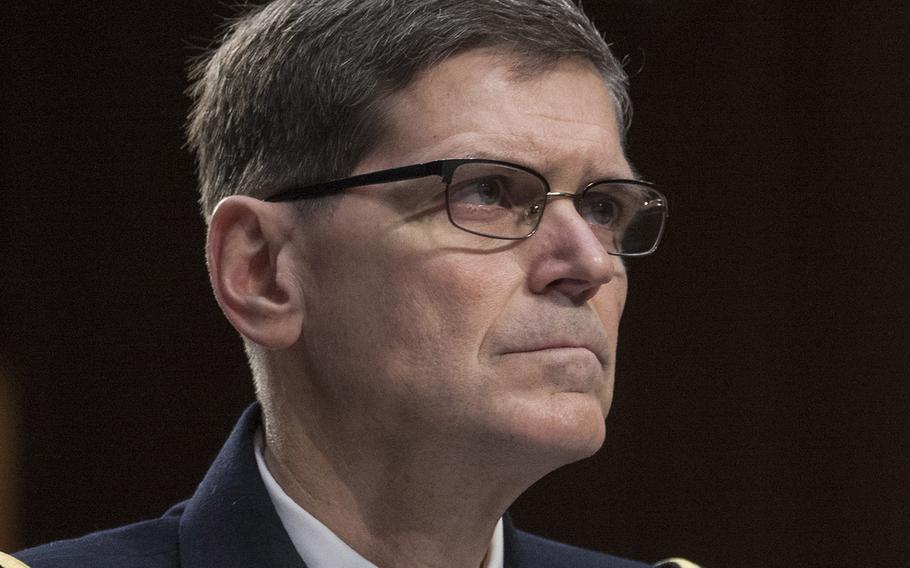 Buy Photo
Gen. Joseph Votel, at a Senate hearing in 2017. (Stars and Stripes)

WASHINGTON – The top American military commander for the Middle East on Thursday warned Iran must curtail “reckless, unsafe and escalatory” actions, such as its ballistic missile strike into Syria earlier in the week.

“[But] I don’t think we’re seeking to go to war with Iran, and I don’t think that’s what we’re focused on,” Gen. Joseph Votel, the U.S. Central Command chief, told reporters at the Pentagon during a teleconference.

Votel joined a chorus of top defense officials who have insisted the roughly 2,000 U.S. troops in Syria remain entirely focused on the ongoing fight against the Islamic State. He echoed recent comments made by Defense Secretary Jim Mattis that the presence of American troops have indirectly impacted forces controlled by Iran in Syria, though U.S. forces there have received no orders to counter Iran.

“By our presence, we offer a deterrent effect there,” Votel said. “So while we don’t have any specific military tasks – our focus remains very strictly on de-ISIS right now – I think we do play an indirect role in supporting our broader pressure campaign against Iran.”

For now, that campaign against Iran remains largely diplomatic and economic. Since the United States withdrew from the Joint Comprehensive Plan of Action, better known as the Iran nuclear deal, earlier this year, the U.S. has placed strict sanctions on Iran, crippling its economy. On Wednesday, the United States announced it would also withdraw from a 1955 “Treaty of Amity” with Iran after the International Court of Justice upheld Tehran’s charges that some of the sanctions violated that agreement.

The United States has also accused Iran of illegally smuggling weapons to groups it backs in the civil wars in Yemen and Syria.

Last month, National Security Adviser John Bolton, who has long been an Iran hawk, insisted American troops would remain in Syria until Iran withdrew its military forces and the proxy forces that it commands there. Those groups have operated, along with the Russian military, to bolster the regime of Syrian President Bashar Assad in a civil war that has raged for seven years. Iranian proxy forces have at times skirmished with U.S.-backed and American troops in eastern Syria, in areas liberated from ISIS’ control and held by Syrian Democratic Forces.

Bolton warned last week that there would be “hell to pay” if Iran threatened the United States or any of its allies, such as Israel or Saudi Arabia.

“Let my message today be clear,” Bolton said Sept. 25 in New York. “We are watching, and we will come after you.”

American officials said the six-missile strikes that Iran launched Monday hit an area close to where U.S.-backed fighters operate and within miles of U.S. personnel. Votel said they could have endangered American troops.

The strikes were launched from Iran, over Iraq and into eastern Syria. Iranian state media reported they targeted ISIS fighters and were launched in retaliation for a terrorist attack on an Iranian military parade last month that killed at least 25 people.

Votel condemned the missile strike, labeling it an unprofessional act because the Iranians did not warn military or civil authorities that weapons would be launched, endangering U.S. and Iraqi military flights and civilian aviation.

The CENTCOM chief warned though the U.S. military is not preparing now for a fight with Iran, it was well prepared to defend itself.

“I don’t see that necessarily as being on the road to war with Iran,” Votel said. “I don’t think we are.”