Vote to be a true test in diverse Iraq region 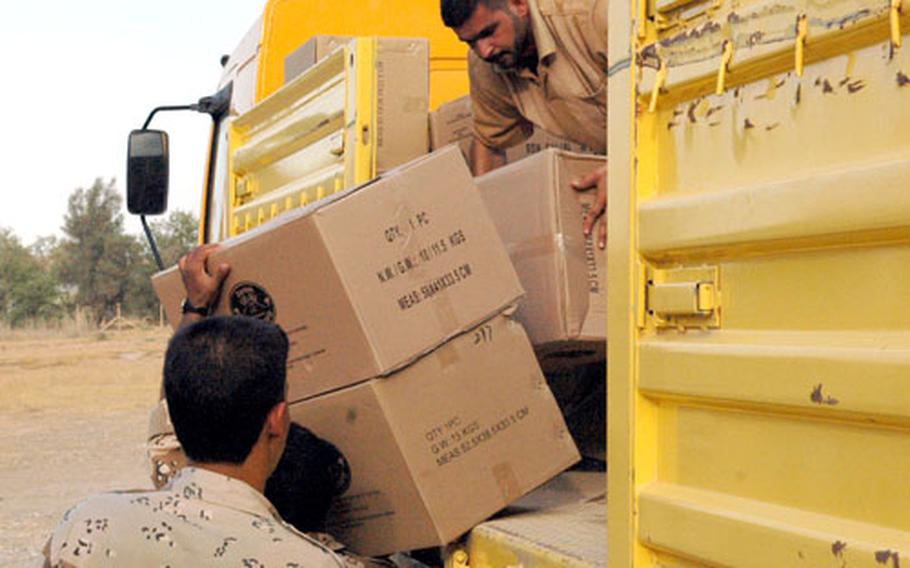 Iraqi Army soldiers unload truckloads of referendum ballots and other voting materials on the Iraqi side of FOB Normandy Thursday afternoon, in preparation for Saturday&#39;s vote. (Andrew Tilghman / S&S)

Iraqi Army soldiers unload truckloads of referendum ballots and other voting materials on the Iraqi side of FOB Normandy Thursday afternoon, in preparation for Saturday&#39;s vote. (Andrew Tilghman / S&S) 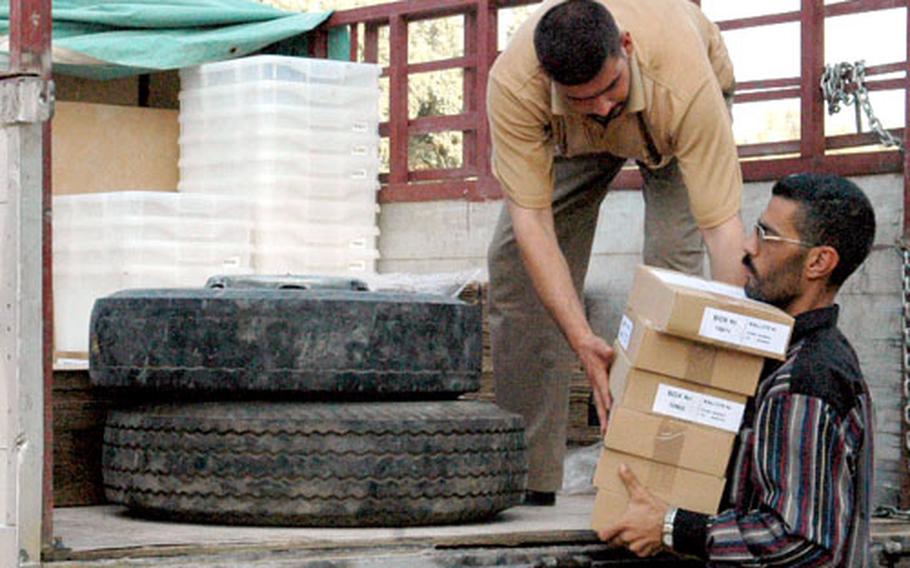 The U.S. soldiers who have been training their Iraqi counterparts here say they will step aside and leave Saturday&#8217;s election &#8212; and the heavy security around the polls &#8212; to the Iraqi police and army.

&#8220;The only way we move is if the JCC calls,&#8221; Cloutier said, referring to the Joint Coordination Center, the Iraqi operations hub.

Both U.S. and Iraqi forces view this as a critical test for the fledgling home-grown troops and their ability to operate independently. Many of the roughly 700 U.S. soldiers from Task Force 1-30 here at Forward Operating Base Normandy expect to leave the area later this year and turn over the base and its primary security duties to a battalion of 1,000 Iraqi soldiers.

The nearby city of Muqdadiyah and its surrounding population of more than 200,000 near the Iranian border reflect the demographics of the entire country, with a 60 percent majority of Shiite Arabs living alongside Sunnis and Kurds.

The predominantly agricultural area of about 386 square miles is overseen by Task Force 1-30, which includes many troops from the 1st Battalion, 30th Infantry Regiment based at Fort Benning, Ga.

In the run-up to the election, U.S. soldiers here have seen an increase in violence, which included their first fatality in more than six months. Staff Sgt. Matthew Kimmell, 30, of Paxton, Ind., was killed early Tuesday morning when a roadside bomb destroyed his Humvee.

Kimmell was on a Special Forces mission; four other soldiers were injured.

Earlier this year, soldiers found between 20 and 25 roadside bombs a month. Since September, however, that has risen to between 30 and 35 in a month, said Capt. Alex Marrone, an intelligence officer. About half of those are found and disarmed before they explode.

In recent weeks, the bombs appear to have grown more dangerous, using a design that makes them more difficult to find before they explode, Marrone said.

Although U.S. troops plan to keep their distance from the region&#8217;s 63 polling sites, they have been integrally involved in setting up and securing the area.

This week, U.S. troops placed large concrete barriers around polling sites to prevent potential bomb attacks. They are helping Iraqis clear the roads to safely transport ballots to and from the polling sites. They will monitor security at the polling sites up until Saturday morning.

A regionwide vehicle ban will be imposed to lower the risk of car bombs. Iraqi poll workers will have metal-detection wands and each voter will be patted down and searched before entering.

On Saturday, teams of soldiers will be positioned throughout the city and poised to react immediately to any incidents the Iraqis may be unable to handle alone. U.S. officers will join Iraqi leaders at the Joint Command Center in Muqdadiyah.

U.S. soldiers will be prepared to offer that help on a moment&#8217;s notice, but many soldiers say that request will be unlikely and expressed confidence in the Iraqi forces.

About $14 million has been spent during the past year to upgrade local water facilities, build schools, improve trash collection and other infrastructure services, soldiers say. But helping Saturday&#8217;s elections unfold smoothly will be the most critical mission yet, Cloutier, the U.S. commander, said.