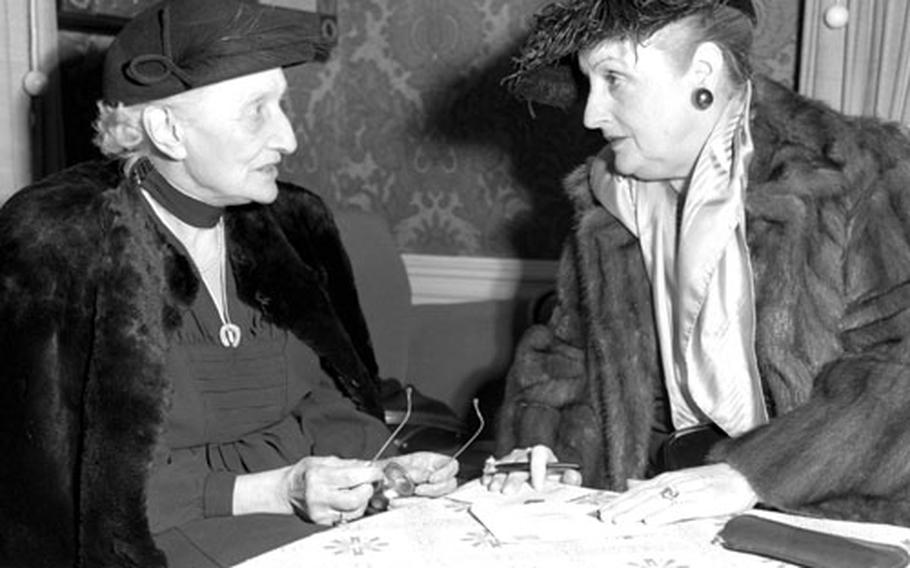 WIESBADEN, Nov. 13 &mdash; Memories of another war &mdash; of pilots, spies and death &mdash; were recalled by an aged German baroness and the American woman who survived the fatal plane crash which robbed the noblewoman of her second airman son.

For the 85-year-old baroness, it marked the end of the war which took her first son Baron Manfred von Richthofen, "The Red Knight," Germany's most-famed air ace, officially credited with 80 victories over Allied airmen.

For Illinois-born Fern Andra, Nov. 11, 1918, signaled the end of the war in which she very nearly lost her life as an American spy in Germany.

Miss Andra, who went to Germany in 1912 as a child movie star, was accused by the Germans of spying during the last days of World War I. It was only her personal acquaintance with Kaiser Wilhelm that saved her, she said.

"I was accused of spying for the Allies," she reminisced. "It was true, but not for the reasons they thought. Actually, I was a courier, memorizing coded messages and repeating them to American contacts in Copenhagen."

"I was lucky. I was a movie star at the time, living in Berlin and a friend of the royal family.

"To save me, it was arranged for me to marry Baron Frederick von Und Zu Weichs, a member of the Hohenzollern family."

The marriage took place on Sept. 28, 1918. Hardly a month later, the baron was dead, a casualty on the Western front.

With the war's end, Miss Andra returned to films and the German stage where she specialized in death-defying stunts in airplanes.

An avid aviation enthusiast, she was. taught flying by the German ace, Ernest Udet.

It was shortly after she gained her pilot's license that she made a flight with Baroness von Richthofen's second son, Lothar.

The plane crashed. Lothar was killed and her director George Bluen died later in a hospital. Miss Andra spent a year recovering from her injuries.

In America for the past 22 years, Miss Andra returned to Germany recently to trace the "more than 100 films" she made here during the 1920s.

"I also want to make a film of the life of Manfred von Richthofen," she added.