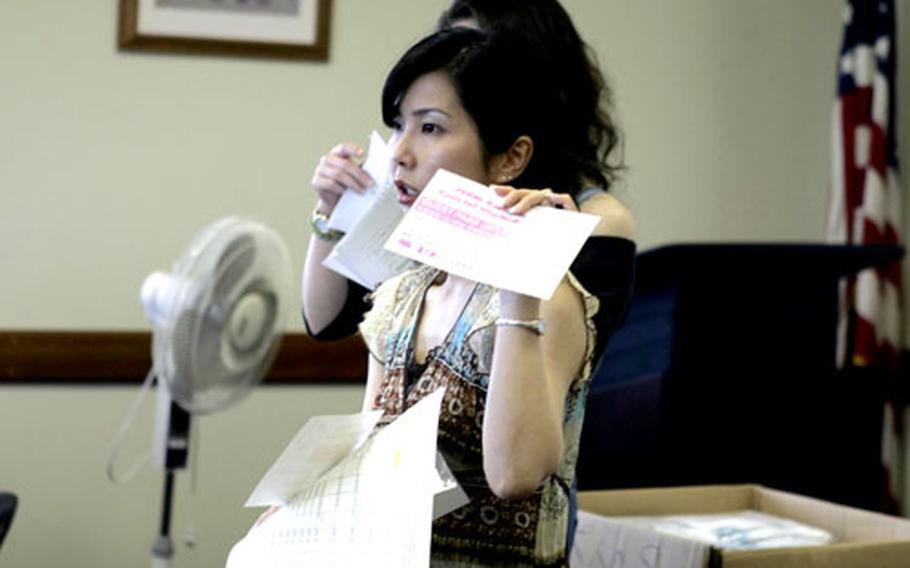 Toma Keiko, a public affairs specialist with the 18th Wing, explains to 65 Japanese volunteers how to prepare and package T-shirts for more than 1,100 special-needs athletes and artists. (Chip Steitz / DODDS)

The volunteers prepared 1,100 packages for the athletes and artists who will be participating in the annual event to be held at Kadena High School, said Chip Steitz, senior adviser for the event.

&#8220;It was just another example of how the whole community is coming out to support this event, which has become one of the U.S. military&#8217;s largest community-relations undertakings in the Pacific,&#8221; Steitz said. &#8220;The response has just been unbelievable. I am humbled by the community&#8217;s generosity.&#8221;

The Special Olympics is a program offering year-round training and competitive opportunities for children and adults with special needs. Last year, some 881 athletes and 250 special-needs artists participated in the program&#8217;s main event, cheered on by more than 2,000 spectators. Most of the participants were Okinawan.

This year, some 900 athletes and 300 artists already have registered to participate.

There are still several fundraising events scheduled prior to game day, including:

A Jog-a-thon, June 14 and 15 at Marek Park. All services marathon. Call DSN 634-0714, for more information.A Torch Run, June 17 with security forces participating. Call DSN 634-0714.A bowling tournament, June 18, from 9 a.m. to 1 p.m. at the Chatan Seaside Bowl in Mihama. Close to 100 athletes are expected to participate in the islandwide tournament.&#8220;Our goal is for all persons with special needs to have the chance to become useful and productive citizens who are accepted and respected in their communities,&#8221; Steitz said. &#8220;The Special Olympics delivers an important message &#8212; people with disabilities have talents and should be afforded the same opportunity to display their abilities and celebrate their successes.&#8221;

Steitz said smaller scale Special Olympics events have been held on Okinawa for the last nine years. The first major games were held on Kadena in 2000.

&#8220;The volunteer members of the Kadena Special Olympics Committee represent all services and includes members of the local community,&#8221; he said. Last year, Okinawa sent 14 students from Okinawa Koto-yogo high school in Gushikawa City to compete in floor hockey at the Winter World Games in Nagano.

&#8220;This year we have been working with athletes to complete in bowling and tennis,&#8221; Steitz said. &#8220;We hope to send them to the national games later this year and then onto the 2007 Special Olympics World Games in Shanghai, China.&#8221;