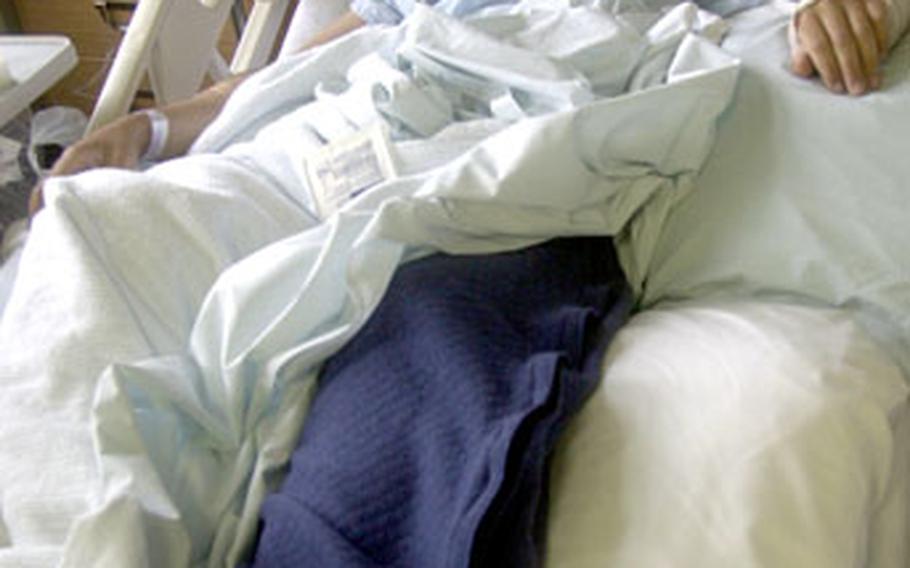 Pfc. Justin Whitmer, 21, of State College, Pa., wears some of the “adaptive clothing” for patients at Landstuhl Regional Medical Center in Germany. The clothing is made by volunteers in the States. (Steve Mraz / S&S)

Pfc. Justin Whitmer, 21, of State College, Pa., wears some of the “adaptive clothing” for patients at Landstuhl Regional Medical Center in Germany. The clothing is made by volunteers in the States. (Steve Mraz / S&S) 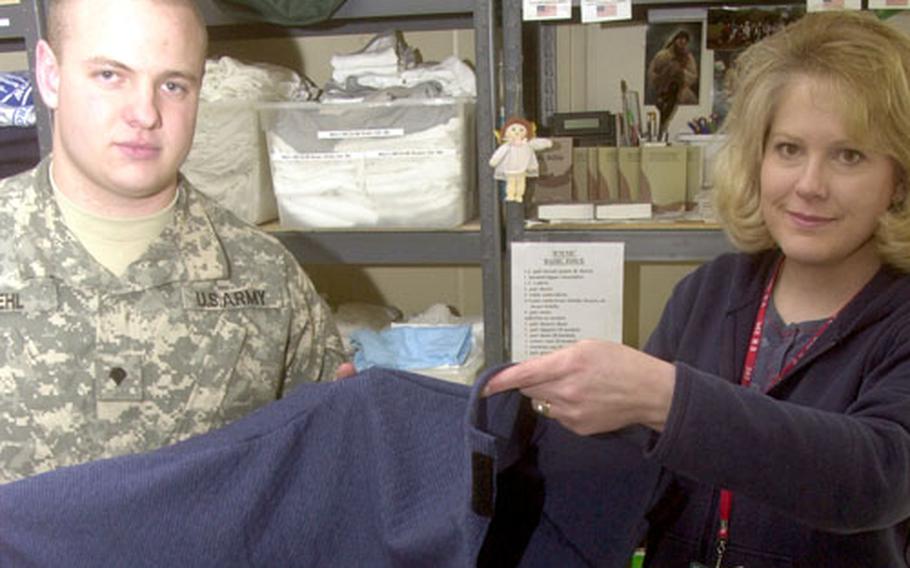 LANDSTUHL, Germany &#8212; A legion of stateside volunteers is providing wounded troops at Landstuhl Regional Medical Center its own type of stitches.

Volunteers with Sew Much Comfort have been stitching &#8220;adaptive clothing&#8221; for wounded troops who are recovering at Landstuhl and military hospitals in the U.S.

The homemade clothing by a team of nearly 1,000 volunteers across America offers wounded warriors an alternative to drafty hospital gowns while allowing medical staff access to patient wounds via fabric fastener seams in the clothing. The adaptive pants, shirts and undergarments are sewn large enough to cover some of the bulky medical devices attached to patients.

Army Pfc. Justin Whitmer received a pair of adaptive pants on Monday while recovering at Landstuhl from a roadside bomb wounds he suffered last week in Baghdad.

Whitmer, whose left leg was wounded during the bomb blast, initially had a pair of breakaway, basketball-type pants that were secured with snaps. He prefers the adaptive pants. He thanked the volunteers for taking the time to make the clothes.

Sew Much Comfort is a nonprofit organization composed of volunteers.

Virginia &#8220;Ginger&#8221; Dosedel, the wife of an Air Force lieutenant colonel, began making the pants for her oldest son when he was undergoing treatments that required an external fixator on his leg. One night in 2004, she was watching wounded troops, dressed in hospital gowns, give interviews and decided to do something about it.

Dosedel began sewing the adaptive clothes at her Alexandria, Va., home and distributing them to troops recovering at nearby Walter Reed Army Medical Center. Thus, Sew Much Comfort was born.

A group of 20 women who started in December 2004 is now an organization of nearly 1,000 volunteers who have made and distributed an estimated 5,000 pieces of adaptive clothing, said Michele Cuppy, president of Sew Much Comfort. In fact, Robbin Hobbins, wife of U.S. Air Forces in Europe Commander Gen. Tom Hobbins, is the group&#8217;s regional coordinator for Europe.

The clothes from Sew Much Comfort and similar groups are available at Landstuhl&#8217;s Wounded Warrior Ministry Center. They can either be picked at the center or delivered to hospital wards.

The adaptive clothes keep the troops &#8220;comfortable and covered because blankets only go so far,&#8221; said Cindy Secor, volunteer coordinator at the Wounded Warrior Ministry Center.

The goal of the group is to give something back to the men and women who sacrificed for the country.

To donate time, supplies, clothes or money to Sew Much Comfort, visit www.sewmuchcomfort.org.