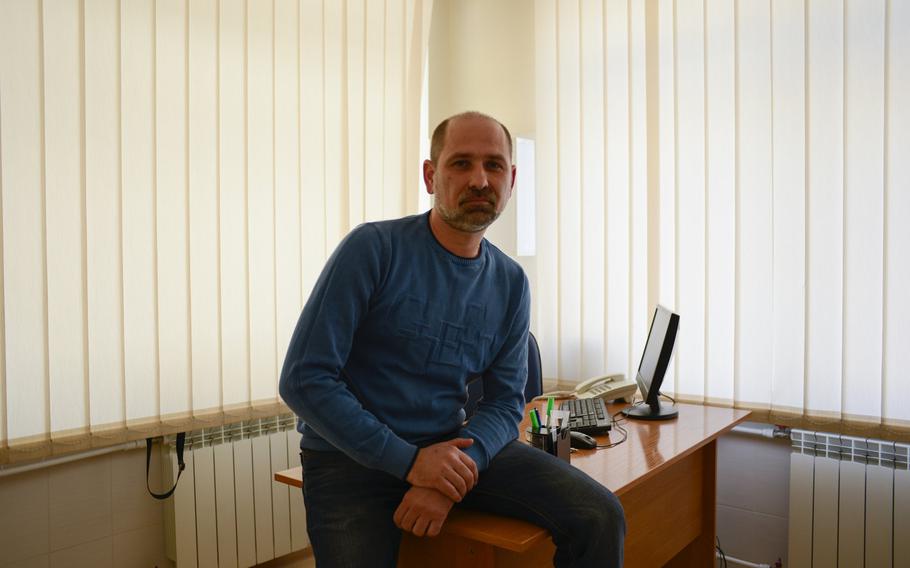 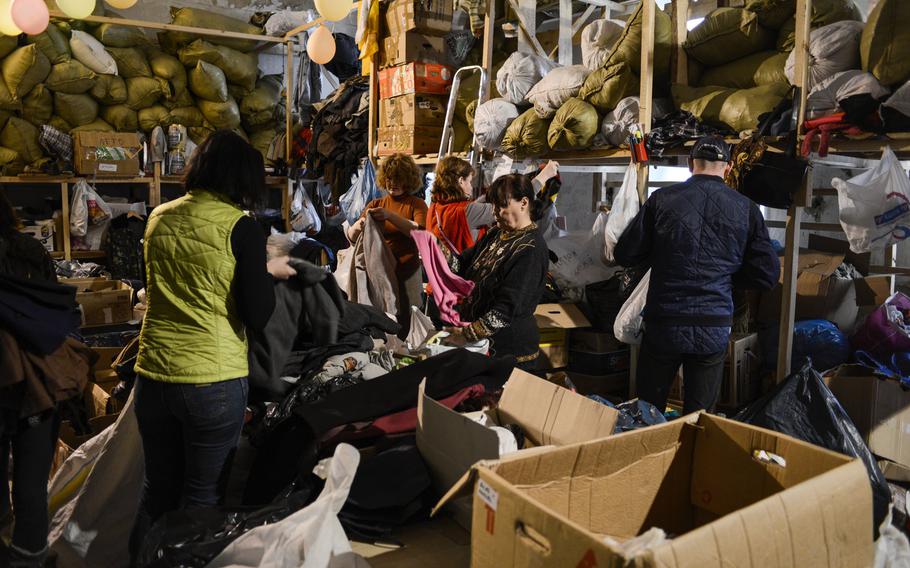 Volunteers at a center for internally displaced persons in Kiev, some of them IDPs themselves, sort through donated clothes. (Joshua L. DeMotts/Stars and Stripes) 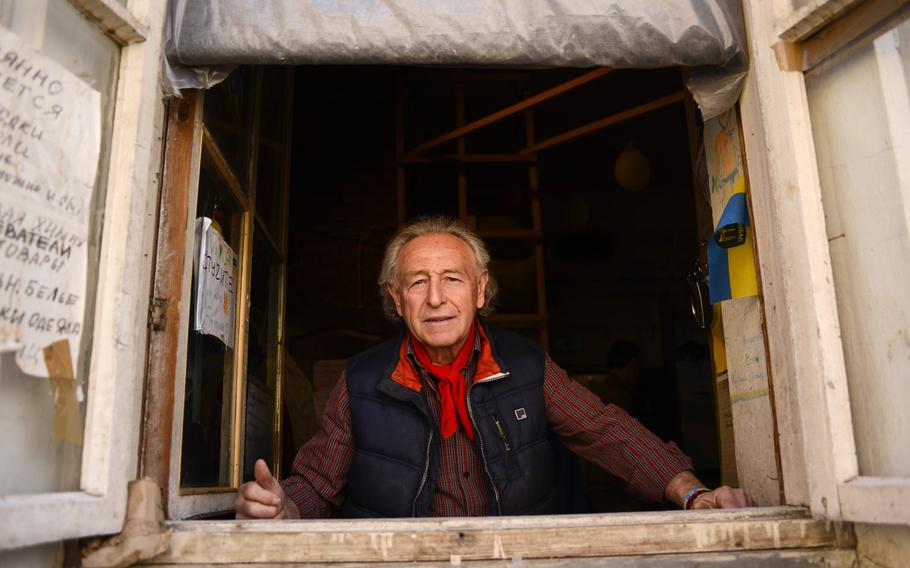 Mario, a Spanish citizen, volunteers at an internally displaced persons coordination center in Kiev where IDPs can get donated clothing, toys and food. (Joshua L. DeMotts/Stars and Stripes) Neal Ivanovna volunteers at a coordination center for internally displaced persons in Kiev where IDPs can get donated clothing, toys and food. She is in charge of the donated toys inside a colorful, cartoon covered bus. (Joshua L. DeMotts/Stars and Stripes) 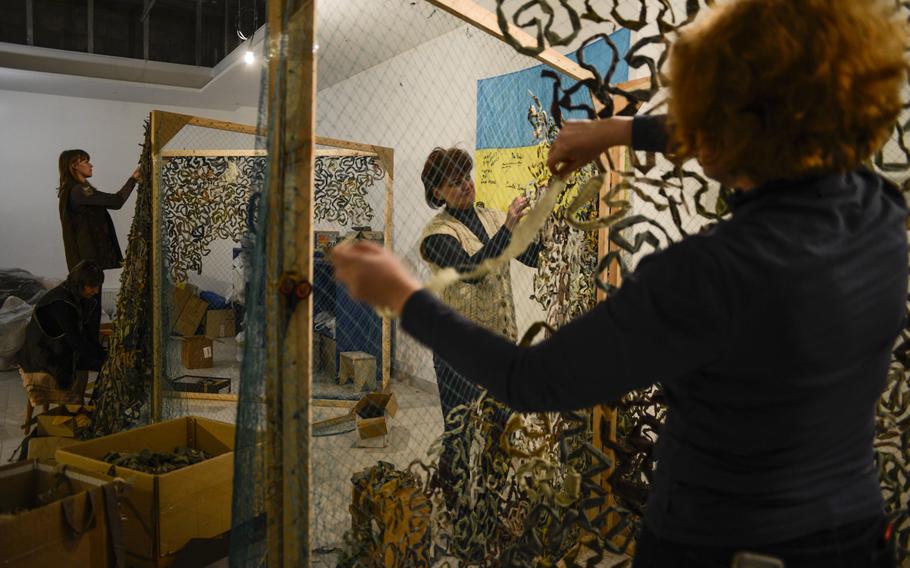 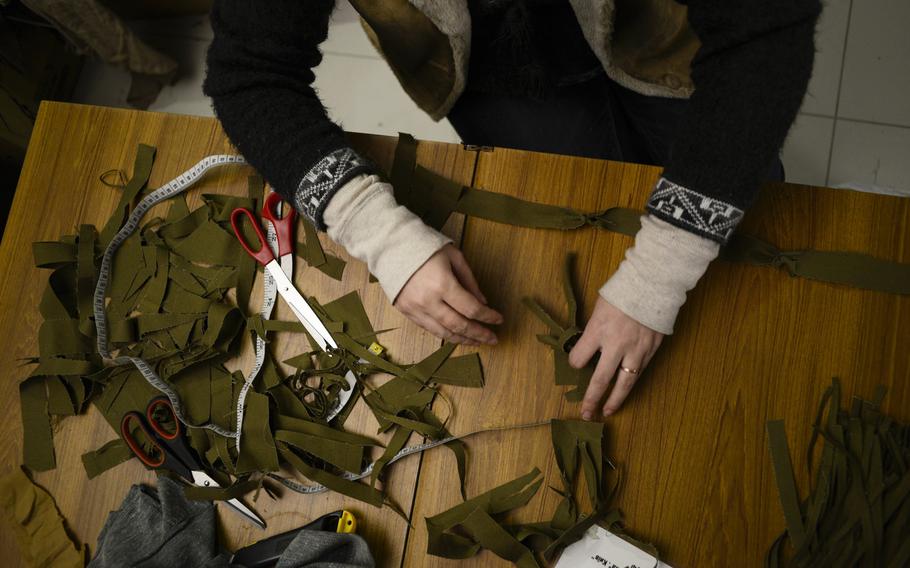 A volunteer in the Sitka, or Net Battalion, cuts strips of dyed material to make camouflage nets for Ukrainian soldiers fighting on the eastern front. (Joshua L. DeMotts/Stars and Stripes) 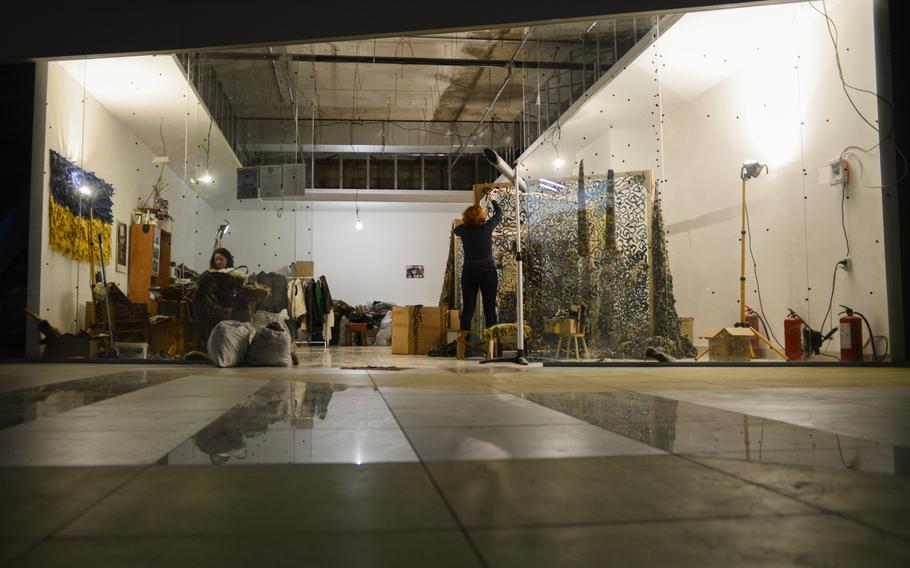 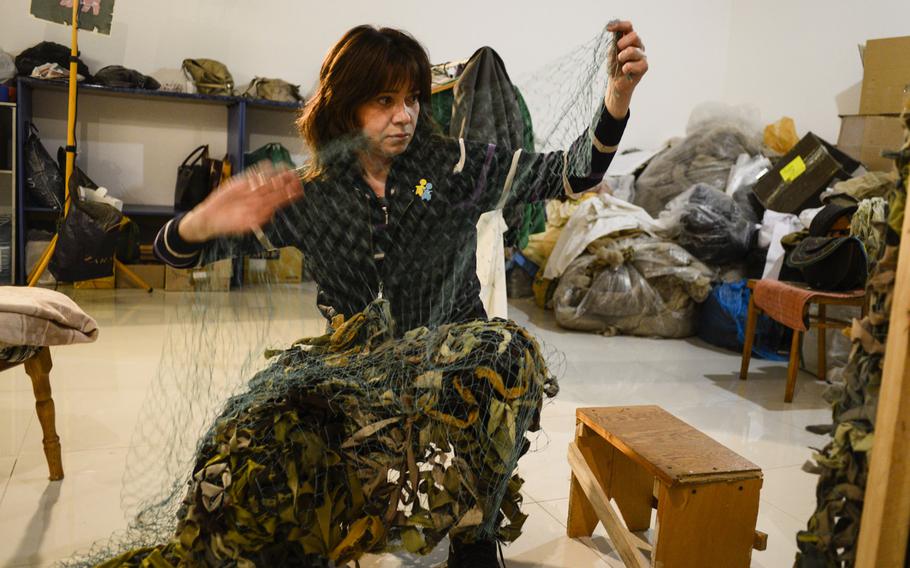 Oksana Stryzhevska, who belongs to a group called the Net Battalion, sorts out material to make camouflage nets for Ukrainian soldiers. (Joshua L. DeMotts/Stars and Stripes) 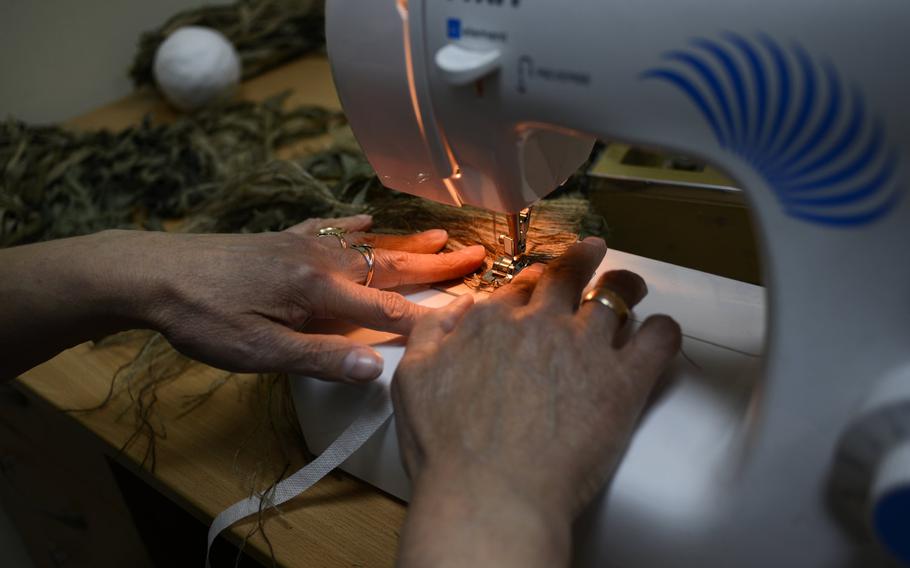 A woman sews material to be used in a Gili-suit for Ukrainian soldiers fighting Russian-backed separatists. (Joshua L. DeMotts/Stars and Stripes) 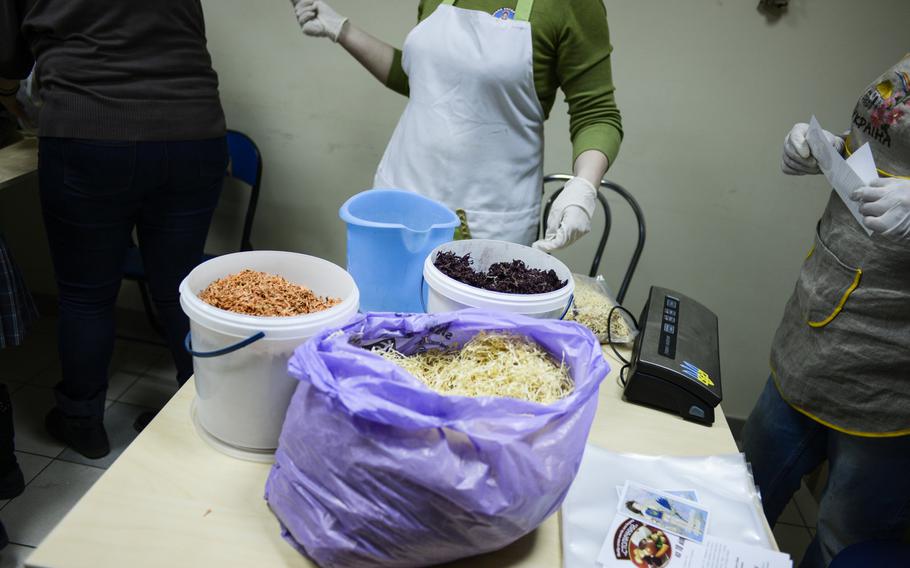 Marina, center, shares a smile with other volunteers. Known as "Marina Marmalade," she heads this group, which makes camouflaged netting, Gili-suits and dried food for Ukrainian soldiers fighting in Ukraine's east. (Joshua L. DeMotts/Stars and Stripes)

KIEV, Ukraine — It was nearly 9 on a Wednesday night, and though she had already put in a full day’s work as a petroleum engineer, Tatiana Fomenko was hours deep into her after-work job, weaving camouflage nets for Ukrainian troops battling Russia-backed separatists in the country’s east.

There were seven other women with her in an empty, second-floor shop in a dilapidated mall outside Kiev’s center. Working under construction lights and warmed by a space heater, they are part of a vast network of volunteers across the city who are laboring to supply front-line troops with food, uniforms, camouflage and other essentials.

“I need to protect my country somehow,” Fomenko said. “I need to do at least this much.”

Ukraine has been at war since the beginning of last year, when the former pro-Russia president was ousted following months of protests by pro-Westerners that centered on Kiev’s Maidan square. Moscow responded by sending troops into Ukraine and seizing the strategically important Crimea peninsula.

Then, in a scenario widely seen as orchestrated by Moscow, separatists seized control of key administration buildings in Ukraine’s east, prompting Kiev’s continuing efforts to retake control of its territory.

While the fighting in the east has torn off bits of Ukraine into separatist enclaves, the conflict is awakening a dormant sense of national pride in Kiev and in western regions that have sought closer ties to Europe and the West. That patriotism has sparked a wave of voluntarism among ordinary citizens who see it as their duty to pick up the slack left by a government that many believe has mismanaged the war and its fallout.

Their efforts run the gamut from cottage industries of grandmothers knitting socks to fund-raising organizations that buy military gear for underequipped troops. Others are focused on helping the more than 1 million people displaced by the fighting.

Some volunteers equate their work to that of Americans during World War II, when rationing and home-grown victory gardens aided U.S. war efforts overseas.

“It seems it’s a special moment for Ukraine,” said Oksana Stryzhevska, who has been making gear for the military as a volunteer for more than a year.

To the volunteers, it is clear that their country was unprepared for the war and the crush of civilians displaced by the fighting and instability in the east.

A 10-minute walk from Maidan, the square where snipers fired on protesters in February 2014, scores of volunteers separated clothes, doled out food and handed out toys at a center set up to help people displaced by the war. There is no government assistance or bureaucracy here, organizers say, just scores of volunteers buzzing around the complex of trailers, shipping containers and military-style tents arranged behind a beat-up house.

The operation is orderly. Displaced people check in, get a number and wait to be called. Depending on their family’s makeup, they are sent around the complex to pick up food, clothing and other items for which they qualify.

Andrei, a retiree who fled the rebel-held Donetsk region, said it would be difficult to survive without aid from the center.

“The state doesn’t help a lot of people,” said Andrei, who didn’t want to give his last name. “I couldn’t imagine this much aid would come from ordinary people.”

He volunteers there himself six hours a day, nearly every day. “Somebody needs to do it,” he said.

Ludmilla Kyrylenko, a Kiev native, began volunteering at a makeshift hospital during last year’s protests. The violence perpetrated by the pro-Russia government against the demonstrators drew her to action, she said.

She was also affected by Russia’s takeover of Crimea, where all of her close family lived. Her brother and sister-in-law fled to Odessa. Her nephew left for Poland to finish his education.

Kyrylenko now works part time at the center for displaced persons and part time making camouflage nets for the army.

“You can’t be neutral to the rest of Ukraine when this is what happened to your family,” she said. “I am ready to do any work.”

That sentiment is shared by the roughly 200 volunteers, mostly women, who make up the “Net Battalion.” The group operates out of three spaces in buildings across the city, churning out everything from boxer shorts to camouflage netting for front-line troops.

Some put in hours when they can; for others, this is a full-time pursuit. Each has her own reason for being here, but together they hope their efforts will swing the war in their favor and bring it to a quicker end.

“This is our country; we want to recover it,” Fomenko said.

She wants Russia to return Crimea and stop supporting rebels in the east.

“In Russia, they have a lot of problems,” she said. “They should deal with their own problems.”

Oleg Pilipchuk, considered Kiev’s top pediatric orthopedic surgeon, began last year by donating money to help the troops. By summer, he became more involved, raising money to buy vehicles, night-vision goggles and other equipment for Ukrainian forces. Occasionally, he delivers the equipment to the east himself, a risky trip that nearly got him shot last August — by friendly forces.

He brushed the incident off, saying, “It’s war.”

“In general, they respect volunteers there. Because the guys understand that if not for the volunteers, the army would be worse off,” Pilipchuk said.

Anatoly, 35, a volunteer soldier who was visiting one of the net battalion offices in late April after months on the front lines near Luhansk, said that’s true. He did not want to give his last name.

Other than a weapon, the government’s given him nothing, he said. Other volunteers provided the limited training he got before shipping out to the front.

“All of our uniforms, even what I’m wearing now, came from volunteers,” Anatoly said.