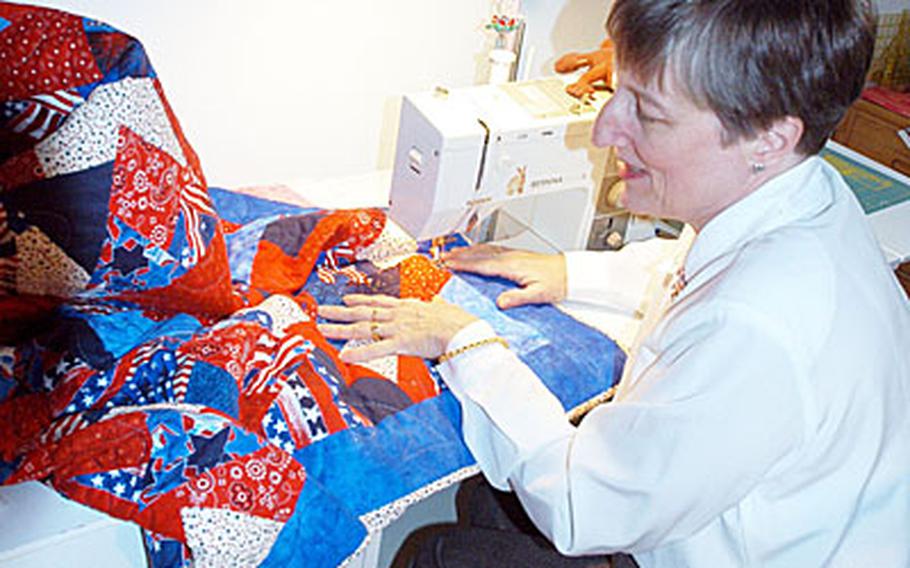 Kathy Hansen uses a sewing machine to make a quilt at her home in embassy housing at Yongsan Garrison. Eventually the quilt will be sent to a soldier who has been wounded in the global war on terror. (Jimmy Norris / S&S)

For more than two years, Kathy Hansen has done all that and more.

The wife of Richard Hansen, a U.S. Embassy research officer in Seoul, she arrived in South Korea in June 2004 and almost immediately began volunteering &#8212; with a sustained commitment that earned her the 2006 Secretary of State&#8217;s Award for Outstanding Volunteerism Abroad.

It all started at the Chosun Gift Shop.

&#8220;I found out that this whole thing pretty much runs on volunteers so I signed up just a couple of weeks after I got here,&#8221; Hansen said.

From there the volunteer opportunities multiplied. From the gift shop she learned about the Armed Forces Spouse&#8217;s Club. From the club she found out about Quilts For Soldiers &#8212; a program that aims to provide a quilt for every soldier wounded in the war on terror.

Hansen also makes and sends quilts to mothers who need them in the Washington, D.C., area and for military mothers having children at Yongsan&#8217;s 121st Combat Support Hospital, through the Stork&#8217;s Nest Quilt program.

A former substitute teacher, Hansen said she loved being in the library and reading to children. So when she saw a sign at the Yongsan Garrison library asking for volunteers, she jumped at the chance.

While reading to children may be the activity she enjoys most, the one she&#8217;s most passionate about is Quilts for Soldiers.

&#8220;My husband&#8217;s nephew was in Iraq. He was not physically injured but he had post-traumatic stress syndrome when he got back,&#8221; she said. &#8220;I was able to send him a quilt, and it just made me feel that there was a tangible link to these men and women who are fighting for my freedom and the freedom of the world.&#8221;

Hansen, with two grown children, said she spends 15 to 20 hours a week volunteering &#8212; though her motivation isn&#8217;t entirely selfless.

Indeed, when she was to receive her volunteer of the year award in December in Washington, D.C., she asked her daughter, Kathy, to accept it and a $2,000 check so Hansen wouldn&#8217;t have to disrupt her schedule in South Korea.

Hansen encourages others to become community volunteers, and said it doesn&#8217;t have to be a chore.