Volunteering has dual purpose in Europe 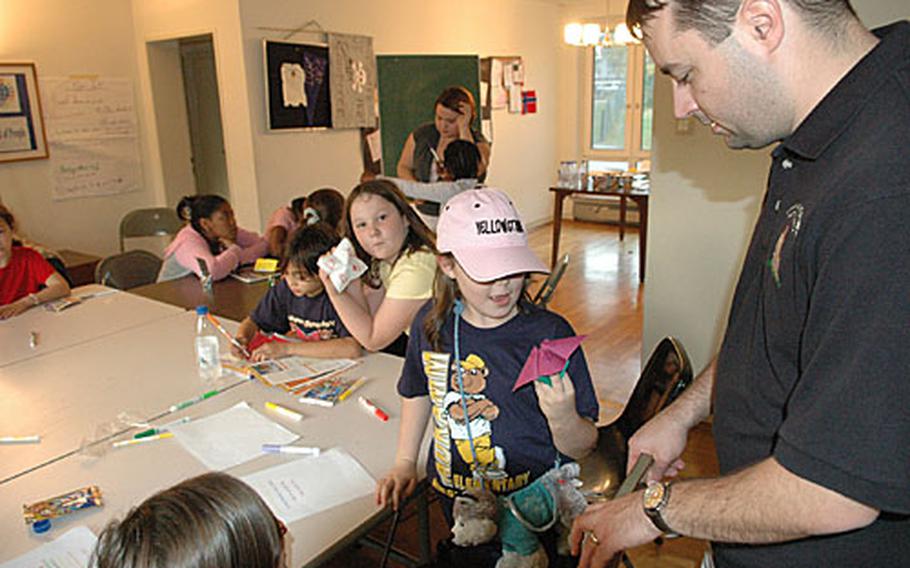 Air Force Tech. Sgt. Bill Duchanse helps out at a meeting of Junior Girl Scouts Troop 400, of which one of his daughters is a member. Known as a “Do-Dad” among the Girl Scouts in the Wiesbaden community, Duchanse also coaches volleyball for Children and Youth Services. (Charlie Reed / S&S)

Laura Harville gives each Girl Scout a hug on her way out the door, leaving everyone beaming with bigger smiles and more energy than when the troop meeting started.

&#8220;I take all the hugs I can get,&#8221; said the 21-year-old Army wife, whose husband deployed for Iraq in September with the 1st Armored Division out of Wiesbaden.

For Harville, volunteering with the Girls Scouts is not only a way to give back &#8212; especially to girls whose fathers are downrange &#8212; but also a coping method while her husband is away.

But while Harville finds comfort in keeping busy, other spouses can&#8217;t shake the emotional strain that deployment brings and withdraw from volunteer commitments altogether.

&#8220;It makes you very sad. But I feel the most supportive thing to do is not put the pressure on them. Of course, you always keep the door open.&#8221;

Deployments and the constant movement of military and civilian personnel in and out of European garrisons strain the volunteer pool.

Communities with highest rates of deployments often suffer the most, &#8220;although we&#8217;re blessed because we do have people to step forward to keep things going for the kids,&#8221; he said.

Spreading the word that moms can volunteer with the Boy Scouts &#8212; as Eldredge is doing &#8212; has helped the organization through tough times, he said.

It&#8217;s a similar situation for Air Force Tech. Sgt. Bill Duchanse, who volunteers with the Girl Scouts in Wiesbaden, where his three daughters are involved in as many troops.

Duchanse, who also coaches volleyball for Child and Youth Services, said being a mentor to kids with parents downrange is challenging but fulfilling.

The trick to maintaining programs, particularly when a community is experiencing a massive deployment, is to let people know their help is needed, said Arlana Young, the CYS volunteer coordinator in Vicenza.

Vicenza&#8217;s CYS is launching a campaign to encourage spouses of deployed soldiers to volunteer.

No one knows that better than Christy Cordero, whose husband, a sergeant with the 596th Maintenance Company out of Darmstadt, Germany, just got back from his third deployment downrange.

Cordero, a mother of five and Brownie troop leader, said staying busy was key to surviving while her husband was away.

Between volunteering, running the household and taking online college courses, Cordero &#8212; who gets up at 4:30 a.m. most days to study &#8212; is constantly on the go.