Volunteering brings out MP’s softer side 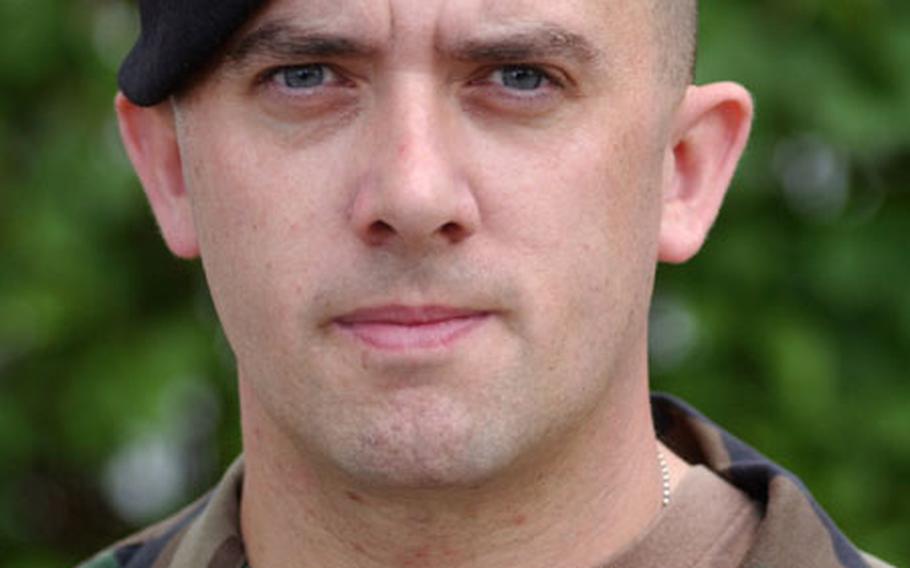 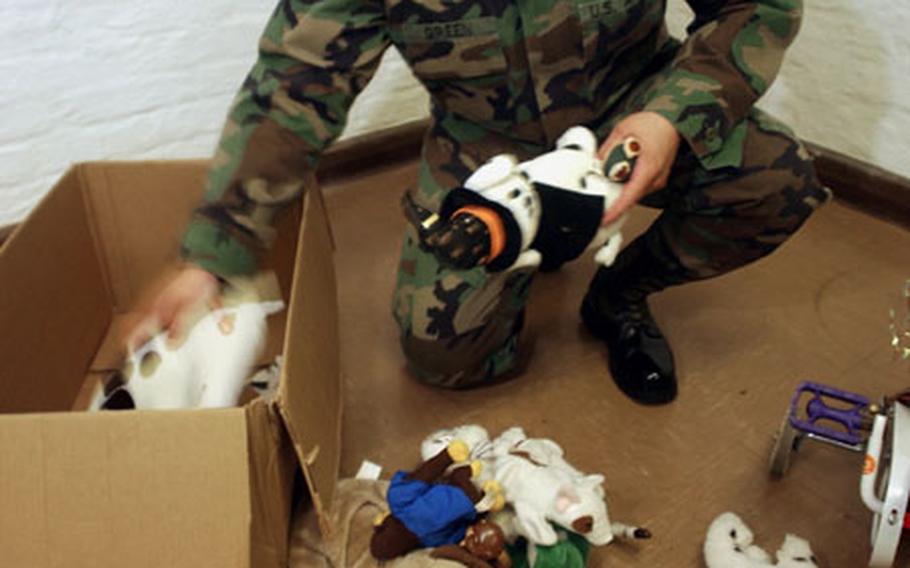 Spc. Troy Green, a member of the Missouri National Guard called up to work as a military policeman in Darmstadt, Germany, shows his softer side as he goes through a box of toys donated to needy children. (Ward Sanderson / S&S)

Green sees it as sick reality.

An inmate in solitary confinement once kicked a food tray through a slot and into Green&#8217;s groin, sending him lights out from the pain. He&#8217;s been called in to emergency duty when prisoners mounted padlocks to belt buckles and opened up guards&#8217; heads.

But the 33-year-old specialist in the Missouri National Guard, called up last year to work as a military policeman in Darmstadt, seems a sunny character around post. His buddies don&#8217;t associate him with batons so much as with toy drives or the Special Olympics.

Green said that back in the day, he was a hard guy.

His special tactics and response team at Crossroads Correctional Center in Cameron, Mo., specializes in riots, hostage stand-offs and manhunts. Hostage situations are Green&#8217;s turf. The maximum security, all-male prison was the first in Missouri to put up a lethal electric fence.

Then five years ago, the Missouri Department of Corrections decreed that he and his colleagues would carry the Special Olympics torch in a law enforcement relay from Cameron to St. Joseph, about 36 miles. There would be corrections officers like him, sheriff&#8217;s deputies, highway patrolmen, city cops, too. The race would end in the parking lot of a Wal-Mart.

Green did the run because he had to.

Then the kids swarmed around the cops at the finish. They waved a welcome banner. They wanted to hold up the polished brass Olympic torch. They treated Green like a rock star. There was a whole other world out there, a world where people didn&#8217;t respond to bad breaks by breaking the law, but by reaching for gold.

Green has done the torch run ever since. And he&#8217;s twice done the Missouri Polar Bear Plunge, a February dip in the Lake of the Ozarks to raise money for Special Olympics.

When he moved to Darmstadt in January, he immediately looked up the 233rd Base Support Battalion Drug Abuse Resistance Education officer, Sgt. Joseph Ward, to volunteer. Green has dressed up as McGruff the Crime Dog. Now, Ward is pushing to have Green nationally certified as a DARE officer himself.

In May, Green volunteered as a morale-boosting &#8220;buddy&#8221; for Special Olympics athletes competing in Kaiserslautern.

He was also the point man in a toy drive for Iraqi children. The Darmstadt community donated more than 300 pounds of toys. They&#8217;re trying to get more now.

All the good deeds can be tough on the scheduling, Ramsey admitted.

&#8220;But as far as the people in the community, they see him out there, and usually he takes one of his squad members with him, and they get to see my MPs out of uniform, not just pulling people over.&#8221;

One of the squad members is Sgt. Billy Bunch, himself a former sheriff&#8217;s deputy from Springfield, Mo.

Back home in Missouri, Green has a wife and three kids. The oldest, Madison, is taking tough-girl lessons from Dad. Last year, she took fourth in her division of the tae kwon do world championship tournament in Little Rock, Ark. The 7-year-old keeps her little brother in check. But Green wants to instill a respect for gentler things, too.

&#8220;My wife and I try to teach our kids strong family values and basically being a good person and helping people,&#8221; Green said.

And you can learn that from what may seem the most unlikely of sources. Such as the Army officer&#8217;s preschooler who brought her bike to Green to give to a kid in Iraq. She struggled to give up the sentimental wheels, but did so without a tear.

Or from the Special Olympics kids that day at the Wal-Mart five years ago, happy despite life&#8217;s hard knocks, shouting and smiling and waving at a tough guy named Troy Green.