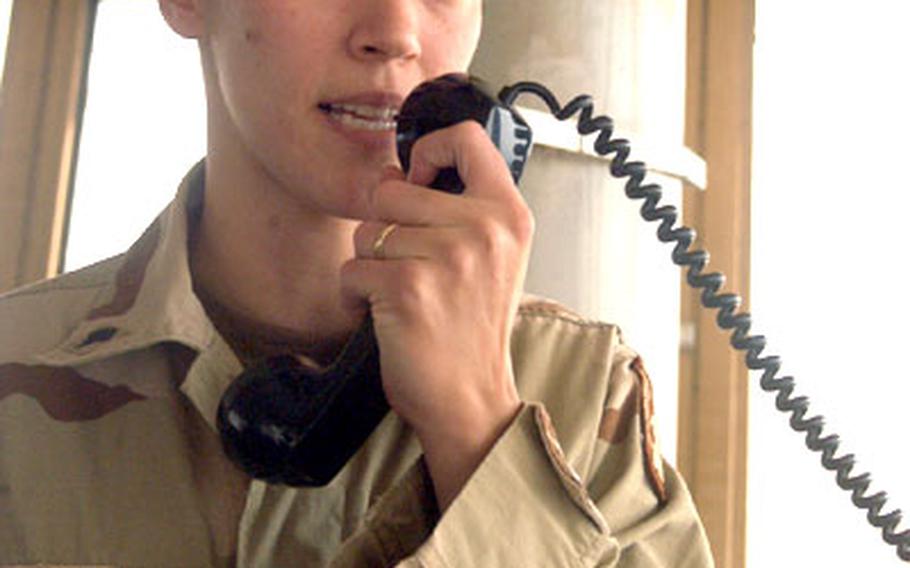 Spc. Erin Korich, an air traffic controller with the 3rd Battalion, 58th Aviation Regiment from Katterbach, Germany, talks to a pilot from the tower at Balad Air Base, Iraq. Army and Air Force controllers work side by side directing a variety of aircraft into the base. (Ron Jensen / S&S)

BALAD AIR BASE, Iraq &#8212; The aircraft that fly into Balad are big and small, American and foreign, slow and fast. Many can even hover in midair.

For the folks in the control tower, the activity and variety is heaven.

A few hundred times a day, an aircraft leaves the base or arrives. It might be a lumbering C-5 Galaxy or a speedy F-16 Flying Falcon. It might be a Chinook helicopter or an RC-130 Army reconnaissance plane. Or it could be a pilotless remote control aircraft.

Shoot, it might even be an odd-looking Russian cargo plane.

When Spc. Erin Korich and Spc. Brett Cole arrived in March with 12 other Army air traffic controllers from Company B of the 3rd Battalion, 58th Aviation Regiment at Katterbach, Germany, they were masters with helicopters but novices with fixed wing aircraft.

The air base serves the largest supply hub in the Iraqi theater. Logistics Support Area Anaconda is a lifeline for nearly 140,000 troops battling insurgents in the country.

Erolin, who has worked at Air Force fighter bases, said this one tops them all for the sheer number of aircraft movements.

But it is not just the volume, he said, that makes it such a challenging and enjoyable job for controllers. It is also the variety of aircraft.

If fast-moving fighters, slow Sherpas and some helicopters all converge on the base at the same time, the controller has to line them up in a way that will get all down as quickly as possible.

Of course, they are creating this art in the middle of a country wracked by war. Although the threat has been quiet lately, the base has been a bull&#8217;s-eye for the enemy outside the wire with mortars and rockets.

As a result, controllers have to be on the lookout for any attempt to shoot at the aircraft coming or going outside the base perimeter.

If an aircraft gets shot at, it will take evasive action. The controller must be ready to tell the pilot if other aircraft are in the area and tell the other aircraft what has just happened, he said.

Also, because the control tower is the tallest thing for miles around on the flat desert landscape, the controllers are valuable assets in noting where mortar rounds and rockets land on base.

Controllers let the command post know if they spot a cloud of dust or smoke from an impact, Erolin said. Some have landed so close they&#8217;ve rattled the windows of the tower.

The equipment used in the tower is tactical gear that belongs to the Army. The soldiers from Katterbach have become the experts in the tower, having seen two Air Force rotations of controllers come and go. The flying service does four-month rotations in the theater. The Army does 12-month tours.

While the controllers talked, they also moved various aircraft in and out of the base.

A C-17 left. A remote-controlled Predator surveillance aircraft landed and rolled across the runway. The Army sent off one of its C-23 Sherpas. A Russian cargo jet came in and an Air Force C-130 requested fuel before it left.

While this might be a day to remember at a base that normally sees mainly fighters or tankers or cargo aircraft, the mixed batch of aircraft didn&#8217;t raise an eyebrow in Balad.