Volksfest is back on at Grafenwöhr, Hohenfels 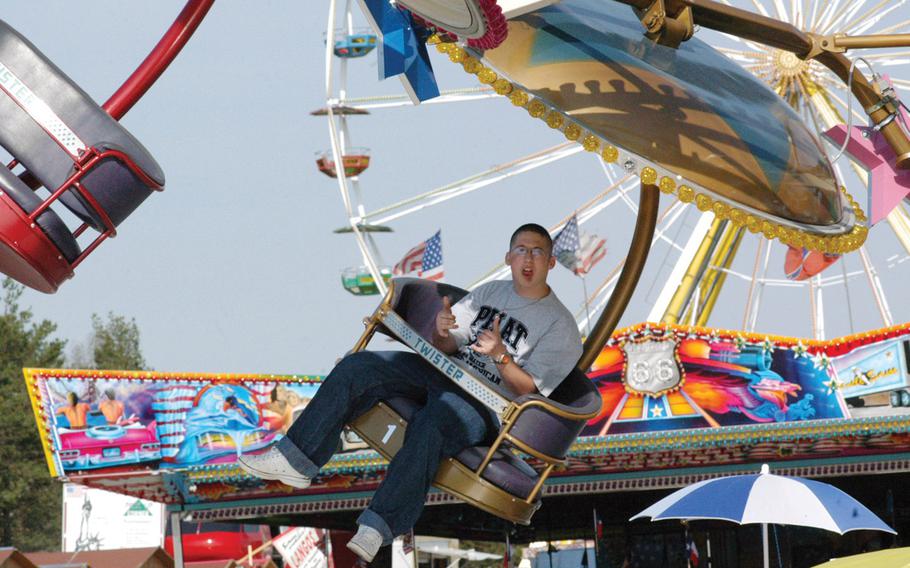 A visitor to the 2005 German American Volksfest in Hohenfels, Germany, signals his enthusiasm for The Twister, a popular carnival ride. After being canceled last year due to budget constraints, the popular community festival and the one in Grafenwöhr are slated to take place again in 2014. (Stars and Stripes)

GRAFENWÖHR, Germany — The U.S. Army-run German-American Volksfests at US Army Garrisons Grafenwöhr and Hohenfels are back on after having been canceled last year because of budget restrictions.

The 56th German-American Volksfest at Hohenfels is scheduled for April 30 to May 4, 2014, according to a base news release. The larger Volksfest at the Grafenwöhr training area is set to run Aug. 1-3.

“This event helps us to celebrate the wonderful partnership that we have with our garrison town of Grafenwöhr and our other German partners,” said Col. James E. Saenz, commander of U.S. Army Garrison Bavaria, in the release. “It’s wonderful news for U.S. Army Garrison Bavaria, the city of Grafenwoehr, and all of the other cities and towns we share a special friendship with. I encourage everyone to attend.”

The popular community festival, which drew between 80,000 and 100,000 visitors annually, was canceled in 2013. Garrison officials cited Defense Department guidance that temporarily restricted funds allotted for nonessential events like the Volksfest. Proponents of the festival, including Hohenfels Mayor Bernhard Graf, fought to bring the festival back in 2014, even bringing it to the attention of U.S. Ambassador John Emerson.

“I wanted him to know that the fest is important to us,” Graf said. “Because it’s a big fest, not only for Hohenfels, but also for the entire Upper Palatinate region. People come here from as far away as Nuremberg and Regensburg.

“It’s a great fest for Germans and Americans to meet and to show the great partnership we share. I’m very glad it’s back,” Graf said.

Norbert Wittl, a spokesman for Hohenfels, said the cancellation of the festival in 2013 was a great disappointment to the town.

“Many Germans were very sad when the Volksfest was canceled,” he said. “They were very upset to see it go, and the people used everything they had to let people know ‘We want this fest back.’”

As in years past, the Hohenfels festival will feature food vendors selling both American and German fare, souvenir booths, children’s activities, guided nature tours of the wooded areas around town, and displays from both nations’ militaries. The fest is an opportunity to strengthen ties between the Americans and Germans who call the area home, Wittl said.

“Germans and Americans will have five days where they meet each other, eat together and party together,” he said. “It will definitely foster our relationships.”