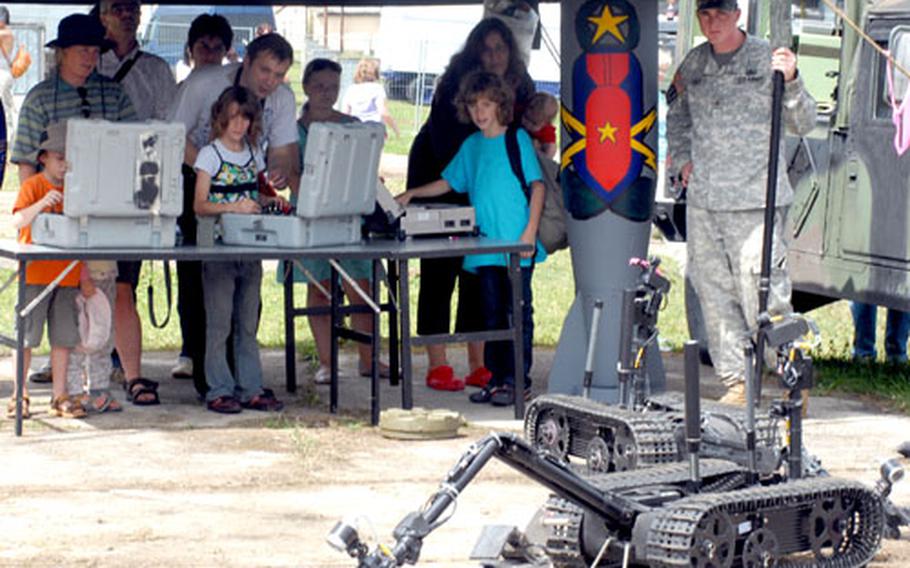 GRAFENW&#214;HR, Germany &#8212; Heavy morning rain didn&#8217;t put a damper on Grafenw&#246;hr&#8217;s German-American Volkfest, which drew thousands to the training area Saturday to sample American food and music once the sun came out.

It is a chance for Germans to sample American culture and see Grafenw&#246;hr Training Area, which is normally off-limits to locals.

Some of the most enthusiastic participants were German military vehicle collectors, who proudly displayed several Jeeps and a "deuce-and-a half" &#8212; a 2&#189;-ton cargo truck.

Hoerl, who lives in the nearby town of Freihung, has fond memories of Jeeps and other U.S. military vehicles passing through town when he was a boy.

Another vintage military vehicle-owner, Harald Rothmund, said nostalgia is a motivation for many collectors.

Rothmund, who grew up in another nearby town, Weiden, recalled American vehicles traveling in convoys in and out of the town&#8217;s old base, Camp Pittman, each month. "They would move around the border camps," he recalled.

Back then the border camps, manned by soldiers from the 1st and 2nd Cavalry regiments were on the frontier with Czechoslovakia, occupied by Soviet forces, a few miles away.

Some of the Army&#8217;s latest equipment was on display near the vintage vehicles. Youngsters were using remote controls to move Talon and Pacbot robots around a concrete pad littered with inert ordnance.

Sgt. Nick Szetecz, 24, of Brooksville, Fla., and a 702nd Ordnance Company soldier, said the Talon is a work robot that explosive ordnance disposal soldiers use to dig and pull items, such as roadside bombs.

"The Pacbot is used for reconnaissance. You can move the camera up to six feet and get a visual picture. I doubt the robot will replace the soldier but I&#8217;d rather send a robot downrange than one of my men in a bomb suit," he said.

The display is designed to show Germans what EOD soldiers do and to give U.S. soldiers at the festival a taste of EOD work, he said.

"Today it is mostly juniors but later in the day we will bring out the bomb suit and the older crowd will come around and try it on," he said.

Bavarian American Ski club president Chris Lawton was working in one of dozens of food stalls at the Volkfest. He said about 20 ski club members were working the stall to raise money for monthly ski club trips in winter.

The ski club was selling American beer and Mexican food such as nachos, tacos and chili.

"Everybody else here is opening a can of chili that they bought at a store, but we have a secret recipe," he said.