Volcanoes a threat to US bases in Japan 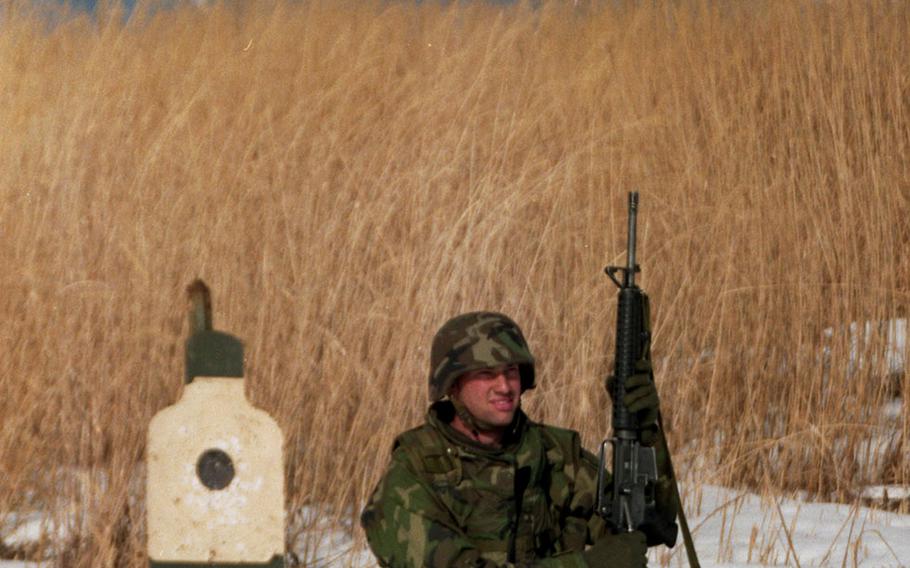 Mt. Fuji provides the majestic backdrop as Marine Lance Cpl. Brandon York of the Combat Engineers Company, Combat Assault Battalion, pauses after shooting his way to his objective at the Camp Fuji training range in 198 (Stars and Stripes file photo)

YOKOTA AIR BASE, Japan — There are signs that Japan’s 2011 earthquake has increased the chances of eruptions among the country’s more than 100 active volcanoes, including Mount Fuji, which could spew so much ash that U.S. military bases in the Tokyo area would be rendered “unusable,” scientists say.

Yokota Air Base — the U.S. Forces Japan headquarters in Tokyo — got something of a volcano drill last month when Mount Ontake erupted unexpectedly in Japan, killing dozens of hikers. Base residents were warned about possible ash-fall accumulations, but fortuitous winds meant ash never reached the area.

Japanese media reported that 4,000 people participated in drills to practice evacuating from dozens of towns and villages near Mount Fuji last week. As part of an exercise, Yokota officials distributed a “volcanic eruption evacuation plan” to workers Thursday.

Mount Fuji used to erupt about every 30 years, but the last time came in 1707, so it already was considered overdue before the 2001 earthquake off the east coast that caused a devastating tsunami and a nuclear disaster.

French scientists said in July that seismic data from hundreds of sensors around Mount Fuji suggests that pressure under the iconic mountain has increased since the quake.

“The risk (of an eruption) is clearly higher,” lead researcher Florent Brenguier told the Guardian newspaper.

Toshitsugu Fujii, a professor emeritus at the University of Tokyo and head of the Coordinating Committee for Prediction for Volcanic Eruptions, agreed, predicting, “In the coming several decades, we can expect that Japanese volcanoes, including Mount Fuji, are likely to be more active.”

Mount Fuji, which looms over the Yokota flightline on fine days, is just over 40 miles from the base. Groups of servicemembers hike to the top of the 12,388-foot mountain during the summer climbing season, when it’s so crowded that pedestrian traffic jams occur.

When it erupts, there’s a high risk that Mount Fuji will spew more than a cubic kilometer of ash up to an altitude of 33,000 feet. Prevailing winds would blow the ash over the city and the U.S. bases, Fujii told a recent news conference.

He said train tracks at Yokohama, near Yokosuka Naval Base, could get 8 inches of ashfall, while the Tomei Expressway near Camp Zama — headquarters of U.S. Army Japan — and Naval Air Facility Atsugi could get a foot-deep covering. At Gotenba, slightly closer to Mount Fuji, there could be 3 feet of ash, he said.

“These bases will become unusable after an eruption,” Fujii said of the U.S. facilities. “Haneda and Narita airports would likely be covered in ash and air transport stopped.”

One of the most disturbing aspects about volcanoes is their unpredictability. Mount St. Helens, in Washington state, had been spewing smoke for so long that many people had become blasé about it when the big blast occurred. Mount Ontake had been rumbling a bit before it erupted, there was no indication anything major was developing.

The Ontake eruption has focused attention on the danger posed by Mount Fuji.

“Recently small scale earthquakes due to the movement of magma beneath the Mount Fuji area have been regularly observed,” the Yokota exercise plan states. “Though it may not be soon, Mount Fuji is expected to erupt at some point in the future.”

Families should discuss the best routes to emergency shelters and how to stay in contact if evacuation occurs, the plan advises.

When an eruption is imminent, people should follow warnings provided by the Japan Meteorological Agency, not be misled by false rumors about the condition of the volcano, and get correct information from reliable sources such as television, radio, newspapers and local authorities, the plan advises.

“Follow official evacuation information as it is provided,” the plan states.

U.S. Forces Japan did not make officials available to talk further about the risks and potential impact.

Fujii said the fate of the bases would likely mirror that of Subic Bay and Clark Air Base in the Philippines after the 1991 eruption of Mount Pinatubo. U.S. forces left both facilities soon after they were blanketed in ash. A 9-year-old American girl was killed when the roof at the base’s dependent school collapsed under the weight of the ash.

The warnings are based on signs such as earthquakes, tilting or deformation of the volcanos, Fujii said. But he added that these phenomena sometimes aren’t observed until just before an eruption, so there could be little, if any, warning before Mount Fuji goes.

“The technology to predict eruptions doesn’t exist,” he said. “We don’t know what will happen a year from now with Mount Fuji.”