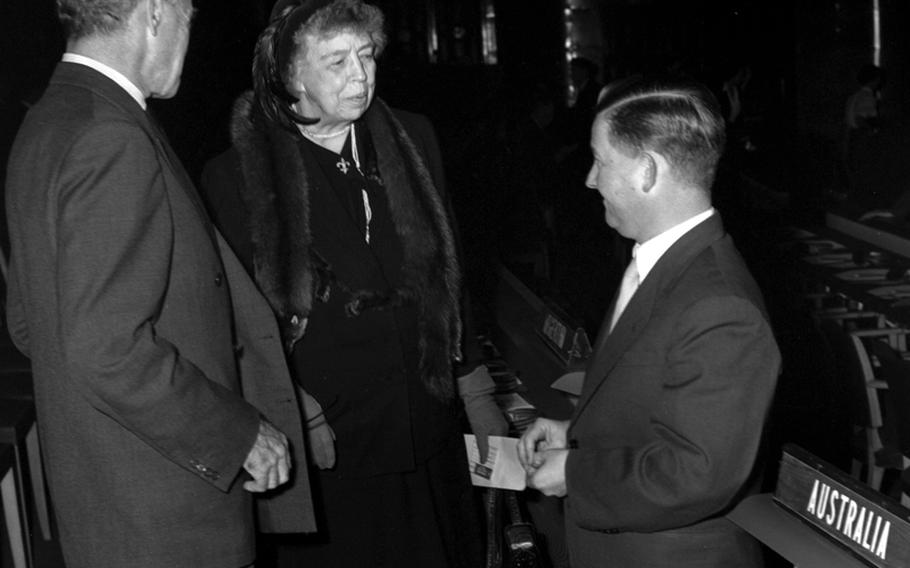 Buy Photo
Meals for the General Assembly delegates were catered by the famed Hotel Crillon. (Red Grandy/Stars and Stripes) Buy Photo
The view across the Seine. (Red Grandy/Stars and Stripes) 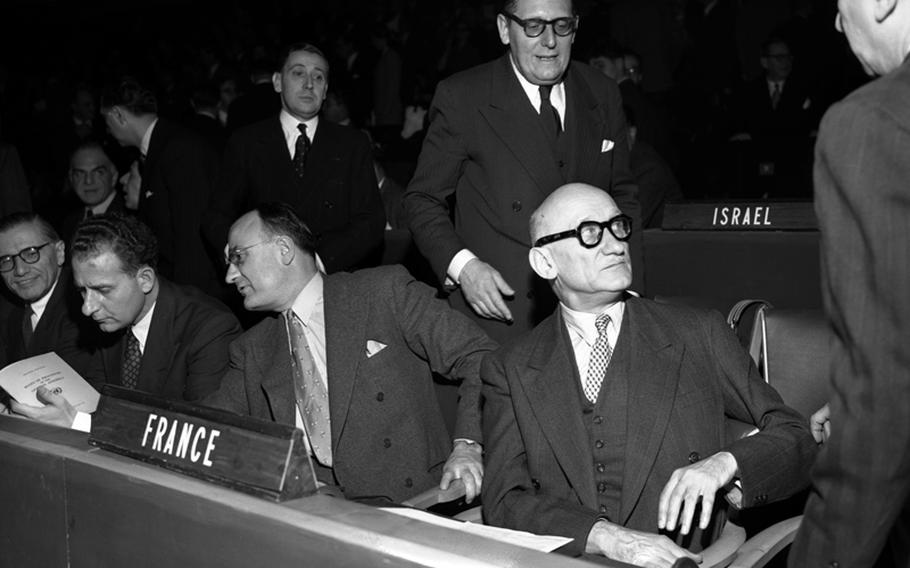 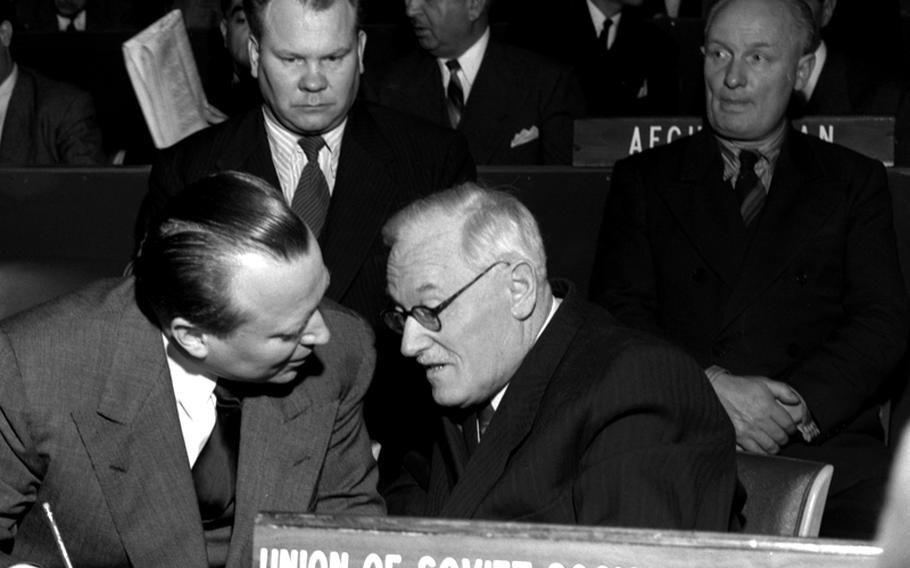 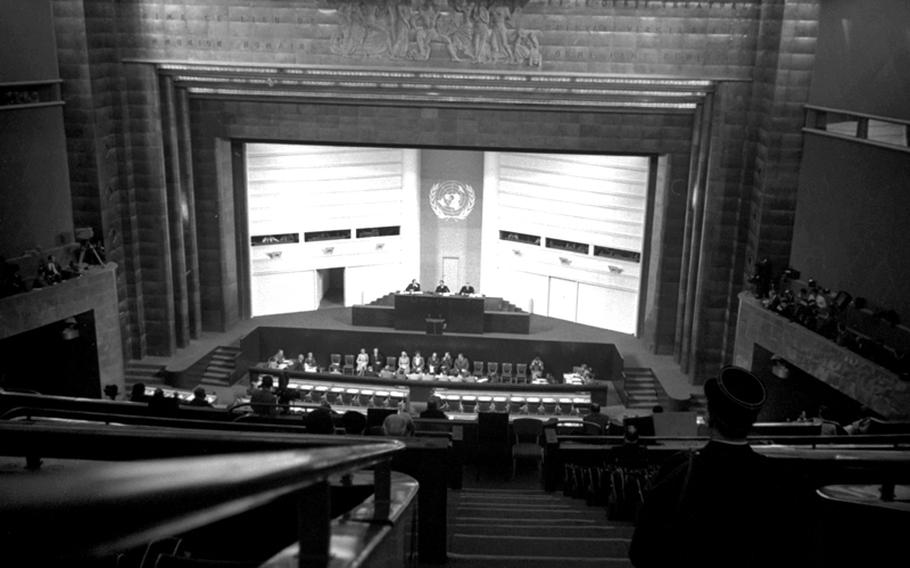 Buy Photo
The General Assembly in session at the Palais de Chaillot. (Red Grandy/Stars and Stripes) 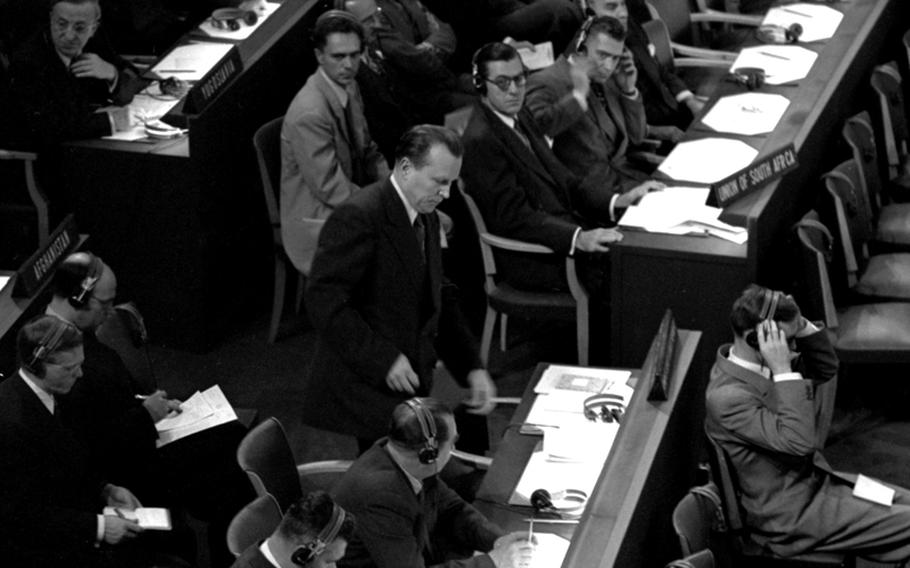 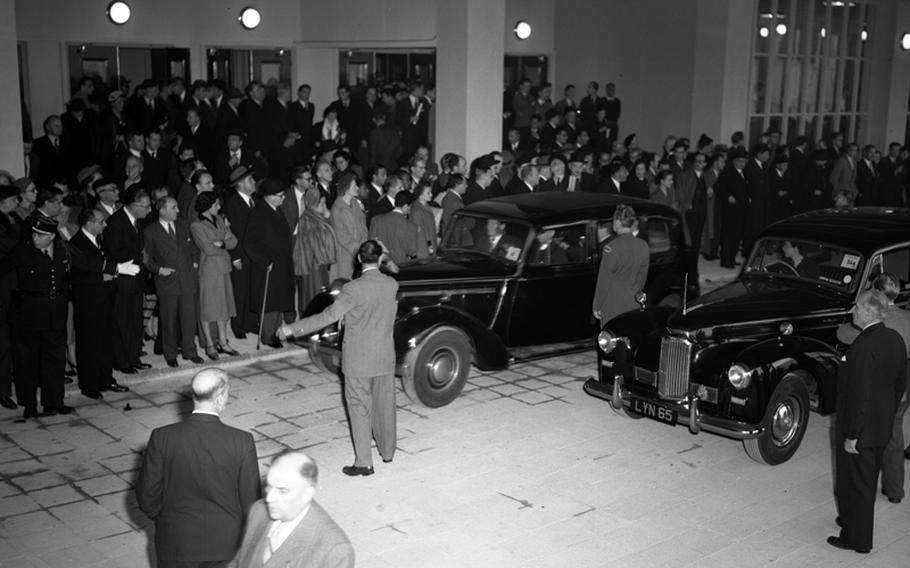 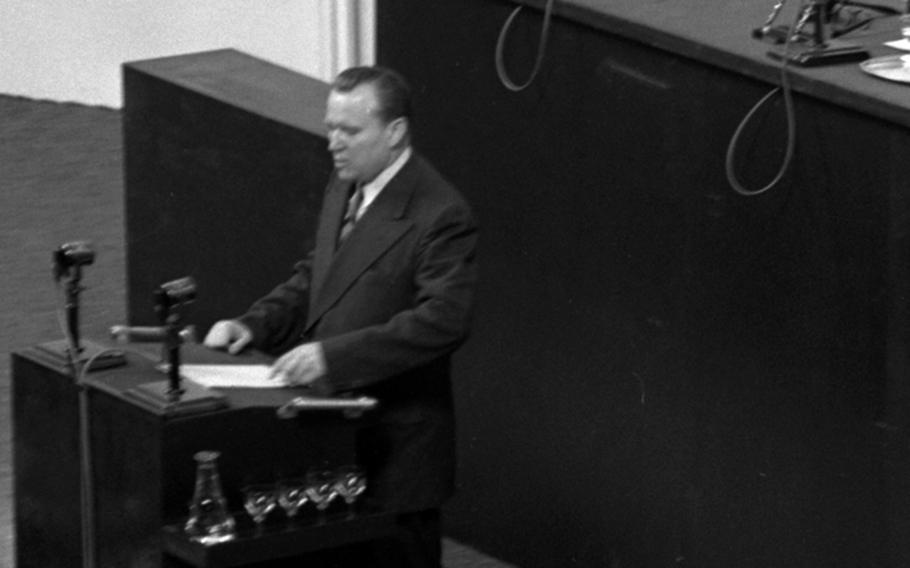 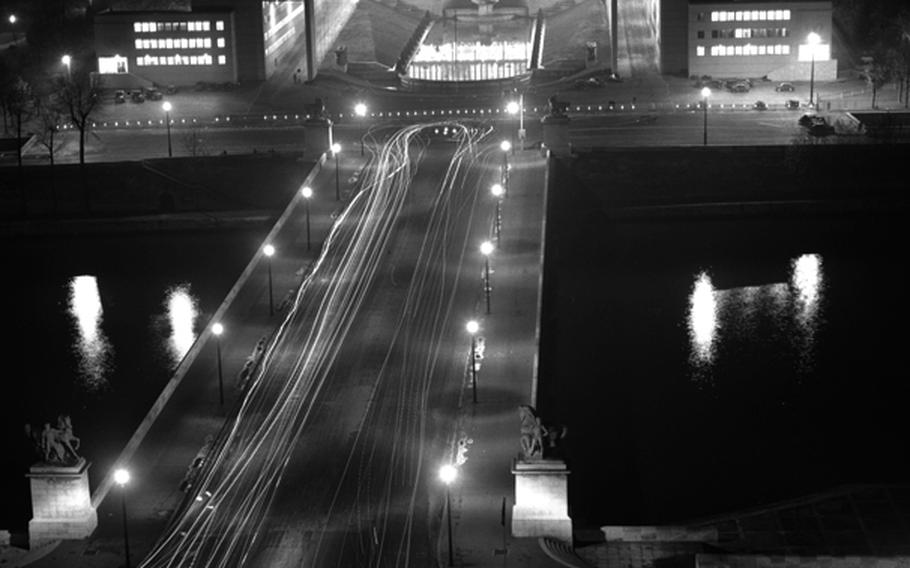 Buy Photo
A night view from the Eiffel Tower across the Seine toward the Palais de Chaillot. (Red Grandy/Stars and Stripes) 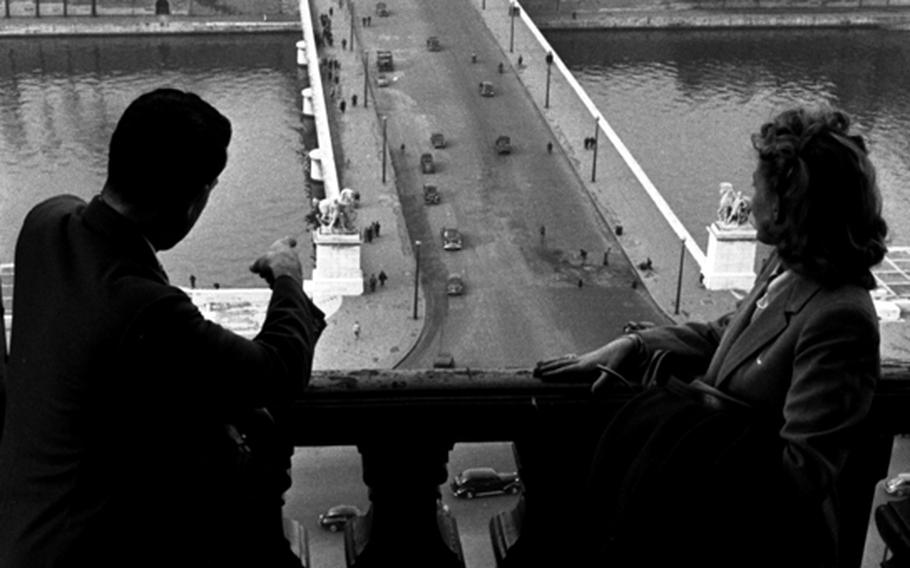 Buy Photo
A view from the Eiffel Tower across the Seine shows the U.N. buildings that were constructed on the river side of the Palais de Chaillot. (Red Grandy/Stars and Stripes) 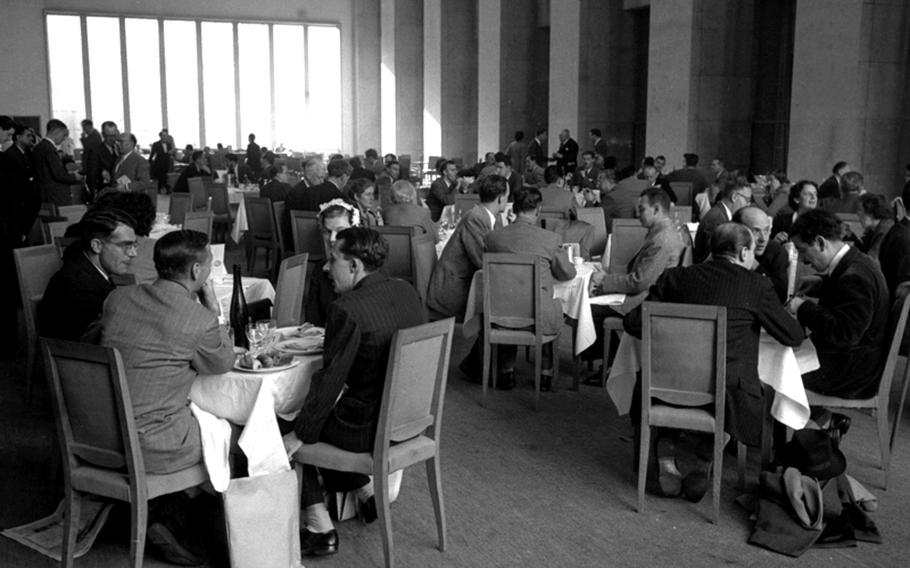 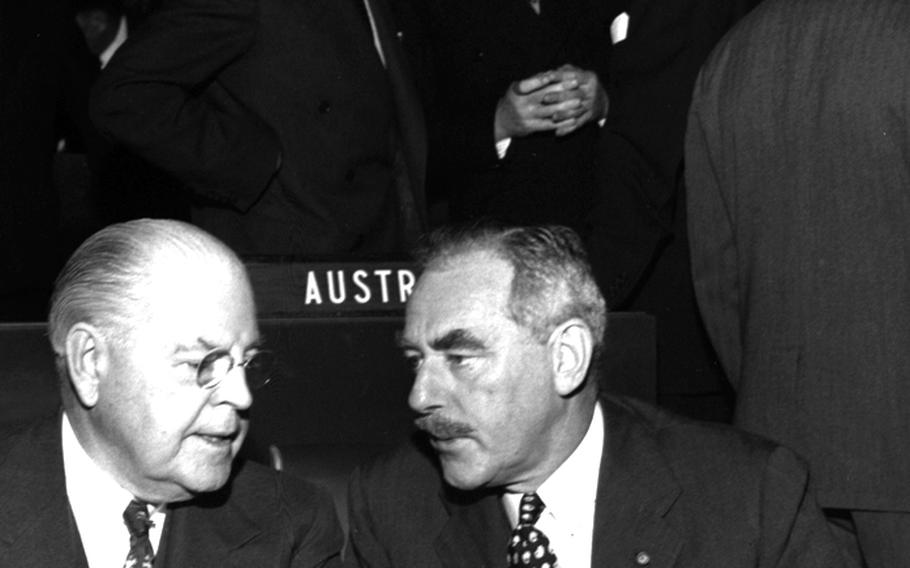 THIS MONTH there were new reflections in the River Seine, and the Eiffel Tower, towering landmark of Paris, cast its shadow directly across the site of history in the making. The stately old gardens of the Palais de Chaillot lay hidden beneath glistening new four-story office buildings, whose lights gleamed like beacons at night along the darkened river front.

A small stampede occurred in the auditorium of the Palais de Chaillot Nov. 6. Several dignified Swedish diplomats, sitting quietly in their seats, were pushed, gouged, kneed and almost literally overrun by a mob of news photographers. The unfortunate Swedes happened to be occupying the seats directly in front of the Soviet Union's delegation to the sixth regular session of the United Nations General Assembly.

The stampede occurred when the man whose words during these next few weeks might spell the difference between world peace or war reached his seat on the assembly floor. One hundred cameras were thrust into the aging face of Andrei Y. Vishinsky. The eyes of the world were turned toward Vishinsky and toward two other dark-suited men who sat a few yards away from him at the same row of desks in the Paris auditorium,

Feeling was general among the delegates, among the newsmen, among the equally multinationed UN Secretariat that this session of the General Assembly would be even more crucial than that which convened after the outbreak of war in Korea last year, that it would mark a definite turning point in East-West relations.

Slightly to the right of the Soviet foreign minister sat the silver-haired knight of British diplomacy, the veteran Anthony Eden. Across the aisle from him was Dean Acheson of the U.S. Each of the Big Three had sent its top foreign-affairs man to this gathering. But world opinion seemed to favor representation on an even higher level. French President Vincent Auriol voiced this wish in his speech of welcome to the delegates. Auriol indirectly invited President Truman, Premier Joseph Stalin and Prime Minister Winston Churchill to come to Paris for face-to-face talks.

Delegates of 60 nations stood together for a moment of silent prayer or meditation and than sat down to face an agenda which touched, in part, upon the following vital questions:

The war in Korea, possible unification of Germany, admission of Communist China to the UN, the future of Nationalist China, international control of both atomic and conventional weapons, treatment of Palestine refugees, threats to the political independence and territorial integrity of Greece and Yugoslavia, treatment of racial minorities in South Africa, the Anglo-Egyptian dispute over the Suez and the Sudan, and other disputes developing out of the rise of Arab nationalism.

UN Secretary General Trygve Lie suggested Jan. 26, 1952, as the target date for ending the sixth session. The busy delegates expect to remain in session at least that long, and possibly much longer.

The UN organization shipped approximately 300 tons of equipment from its permanent headquarters in New York to the Palais de Chaillot, which was the scene of the 1948 assembly. These supplies included 160 tons of mimeograph paper and thousands of discs for recording permanently the estimated 5,500,000 words which will be spoken before the assembly adjourns.

Some 675 regular UN staff members were assigned to Paris from the New York headquarters. An additional 800 persons, mostly clerical help, were recruited in the Paris area. Including the delegates from 60 nations and their individual staffs, about 4,000 persons came to Paris for the assembly session.

Paris newspapers call the striking Seine River site of the 1951 General Assembly sessions "UN Town." The massive structures hastily thrown up over the gardens of the Palais de Chaillot, plus the palace itself, indeed comprise a city within a city. They include 500 offices and 16 conference rooms, in addition to the theater of the Palais de Chaillot, where plenary meetings of the assembly are held, three adjoining restaurants and a large foyer.

The buildings are equipped with three elevators and a service lift and 800 telephones together with a central exchange large enough to handle the normal business of a city of 80,000.

Three thousand persons can be seated in the assembly auditorium. These include 1,600 seats for delegates, 500 for the press and 900 for the public. A French firm has installed four large shell-shaped loudspeakers to improve the acoustics of the hall. Every seat is equipped with a headset carrying a choice of simultaneous translations of every speech in English, French, Russian, Spanish and Arabic.

To make reservations for public seats, visitors should call one day in advance at the UN admissions office, telephone Passy 1127 or 1137. They should state the specific meeting they wish to attend. UN officials said tickets should be picked up one hour to a half an hour before the meeting is scheduled to start at the ticket booth in the Paris wing of the Palais de Chaillot.

Unless present plans are changed, assembly meetings will begin at 10:30 am and 3 pm, with no sessions on Sundays or Saturday afternoons. A limited number of tickets also is available for committee meetings.

The new UN structures, leading from the Palais de Chaillot to the banks of the Seine, were built by 2,000 French workmen in less than five months. All of the foundations and plumbing are above ground in order to avoid damage to the Palais gardens. They can later be taken down and re-erected as permanent buildings on a new site.

Both wings point toward the Eiffel Tower, across the river, and flank the central pool of the Palais gardens. Flags of the 60 nations line the two roadway approaches extending from the river front .to the auditorium entrance, with the blue-and-white UN flag hoisted on a center pole.

Security at the UN site is in the hands of eight special UN guards and 250 French city police, wearing their own uniforms. None of the guards carries weapons.

The famed Hotel Crillon has the food concession for this session as it did in 1948 when the United Nations met in Paris. Three restaurants and three bars are provided for the delegates, the press and the clerical workers. Meals average about $2.85 per person in the delegates' restaurant and are scaled down to less than $1 a meal for the French clerical workers. Foreign typists, stenographers and other assistants pay slightly more. With all three restaurants the tip is included in the price of the meal and, in the delegates' restaurant, wine also is included.

No provision is made for the national differences in eating habits. The chef in charge has been quoted as saying, "They'll eat as Frenchmen or not at all." However, the wine steward is still trying to explain to his friends that the wine cellars are located on the floor above the restaurants. Contractors, in their haste to erect the huge structure, refused to take time to dig a wine cellar, it was reported.

Auriol summarized the task to which these men and women and the delegates of 59 other nations have been entrusted when he told the delegates at their opening meeting:

"A first condition is that we must show determination. We must want peace. This means we must not agree that war is inevitable; it means we must not allow ourselves to drift with events but, rather, must anticipate, guide, and master them; it means participating, in good time, if efforts to make armed collective security a reality &mdash; with all the responsibilities which such a commitment implies &mdash; even if for the time being the threat should appear only indirect."