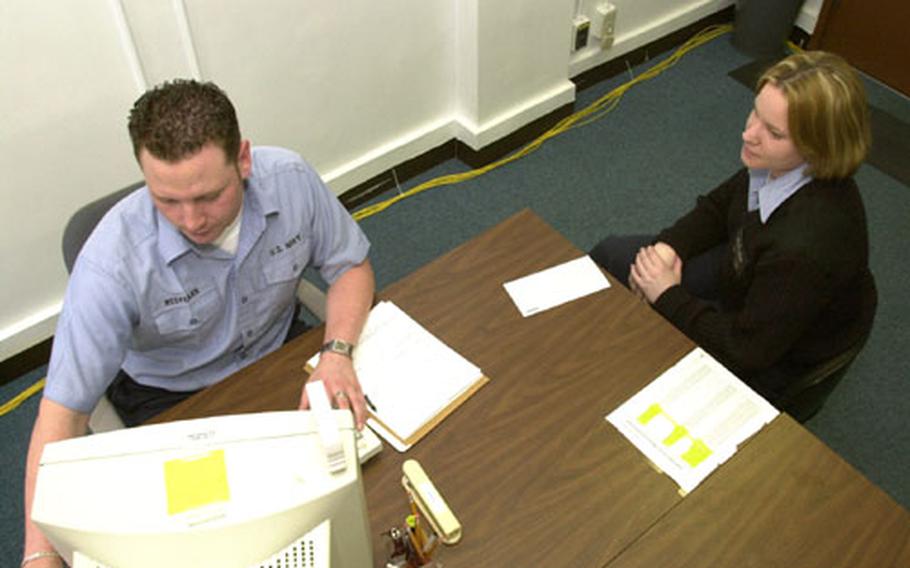 SASEBO NAVAL BASE, Japan &#8212; For servicemembers and civilians working overseas, the dreaded tax-filing deadline of April 15 can be nothing more than just another spring day.

At most Pacific bases the group responsible for helping make the deadline a low-stress flip-of-the-calendar is the Internal Revenue Service Volunteer Income Tax Assistance team, or VITA.

For those confident they do not owe income taxes, it&#8217;s a snap to get a deadline extension, and even a second, if warranted by a situation such as deployment on a ship, said Renee Kroll, a VITA volunteer for four consecutive years.

However, some broad rules apply for deadline extensions.

Based on her considerable experience, she&#8217;s observed that most people have an idea whether or not they owe taxes. &#8220;Some are borderline, but most people know,&#8221; she added.

&#8220;Active-duty military serving overseas, if they do not owe taxes, have an automatic extension until June 15. Any civilian may file the paperwork asking for an extension. And there is even another extension you can ask for beyond June 15,&#8221; Kroll said.

In addition to income tax preparation, VITA offers e-filing. With e-filing, taxpayers receive their refunds in half the time compared with the old-fashioned paper-and-snail-mail method &#8212; even faster when they take advantage of direct deposit of the refund.

Also, e-filed returns are more accurate, and e-filers receive an acknowledgment from the IRS that it has received the return. That represents great peace of mind, even to the VITA volunteers, who are preparing one return after another this time of year.

And for those who consider the April 15 filing deadline optional?

Not that Kroll, or her colleagues, recommend ignoring annual income tax responsibilities. Their advice is quite the opposite.

Petty Officer 2nd Class Chance Hardy stopped by the VITA office to compute and file his taxes. He said staying busy with his job in Sasebo&#8217;s Security Department, as well as a few other pursuits, generally prevented him from thinking about paying Uncle Sam until now.

And by the way, Hardy has had something else on his mind: Sunday, his wife gave birth to his second son &#8212; a future tax deduction.

A VITA volunteer in the morning and local registrar for Troy State (Ala.) University in the afternoon, Kroll said the satisfaction she receives from helping people, especially young sailors who simply don&#8217;t understand income taxes, is a primary reason she volunteers each year.

One of her VITA colleagues, Petty Officer 1st Class Jonathan Pacleb, echoed her sentiments about helping people. However, after losing $800 last year, he decided it was time for him to volunteer.

Along with more than a dozen others, he completed IRS training in January to become a proficient income tax preparer as part of the VITA program.

He said the tax debt eventually proved to be bogus &#8220;but I decided right then that I wanted to learn more about it. The training I got for doing this, and the experience, is something I can take with me&#8221; after separating from the Navy in the future.

Eric Baron, who&#8217;s always done his own taxes and purposefully learned more about income taxes through the years, is another volunteer who devotes his mornings to VITA. In the afternoons, he works for the Navy College Learning Center.

&#8220;My reasons for doing this are twofold, with one being somewhat mercenary. The more knowledgeable I become with the federal returns, the better for me,&#8221; he said.

Taxpayers in Sasebo can call 252-2117 to arrange an appointment.

Taxpayers in Sasebo, and those wanting to take advantage of their nearest VITA program, should bring the following information to their appointment: