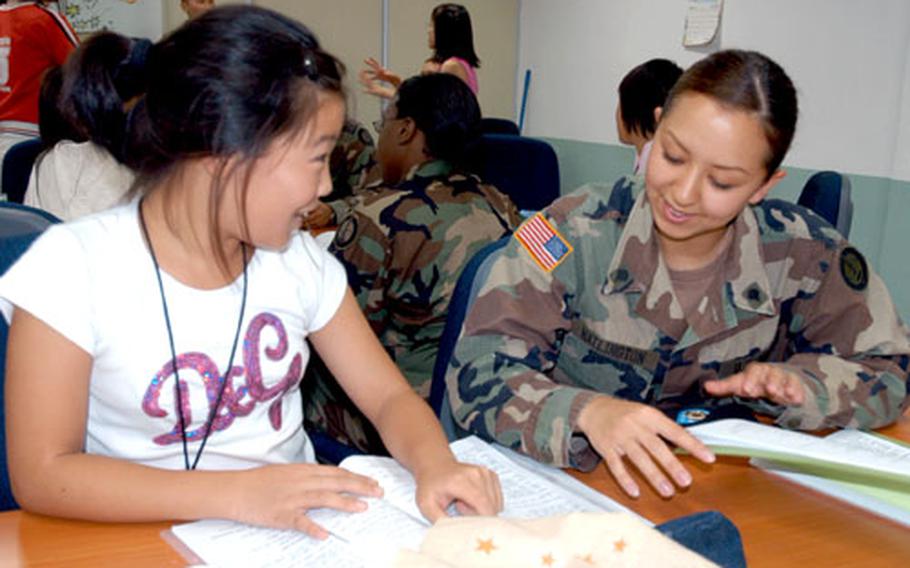 Tongducheon Girls Middle School principal Kim Jon Sik said English classes given by 177th soldiers since March 2003 helped 10 of his students win places at Tongducheon English High School last year. The school is famous for its English-language classes and is difficult to get into, he said.

According to 177th commander Lt. Col. Archie P. Davis III, who visited the middle school with a group of his soldiers on Thursday, the school has reported increased enrollments this year due to the popularity of the English language program.

There are 180 students at the school, which sits on a hill overlooking Tongducheon, the city surrounding Camp Casey. The students soldiers tutored last week were sixth graders participating in a holiday program.

Davis said 15 to 20 soldiers from the 177th visit the school for an hour each week to teach conversational English.

One of the soldiers tutoring students on Thursday, Pfc. Karla Rizo, 27, said the single-sex school is very different from the co-ed public school she attended in New York.

The hallways at Rizo&#8217;s old school were lined with lockers, students did not wear uniforms, and there was a football field and baseball diamond on which to play.

The Tongducheon students wear matching dresses that resemble sailor uniforms, carry all their books in backpacks and play outside on a sandy flat area in front of the schoolhouse. They have two pairs of shoes, one pair for inside and the other for outside, said Rizo, who has visited the school five times in the six months she has been in South Korea.

&#8220;Communication with the students is limited because of the language barrier, so it is hard to gauge their outlooks on life and really compare them to U.S. students. They seem a lot more disciplined and conservative,&#8221; she said.

During tutoring sessions, soldiers split into groups of four and go to 20-student classrooms to teach small groups with KATUSAs (Korean Augmentees to the U.S. Army) who help them communicate.

The students spend the week leading up to a visit from the soldiers studying material for the classes, Rizo said.

&#8220;These girls are very eager to learn. They are so excited to have us here and learn from us. Some soldiers read the material to them and have them read it back. Others let them role-play and then help them out,&#8221; Rizo said.

One of the students selected for Tongducheon English High School, Yoon Chong Hee, 17, of Tongducheon can understand and answer questions in perfect English. Yoon said she had studied English four hours a day for the past five years and plans to study law at a university.

Another student selected for the English school, Yoo Han Na, 17, said the 177th soldiers helped her a lot with her conversational English. Yoo said she also watched television shows such as &#8220;Friends&#8221; to improve her skills.

Yoo also plans to train as a lawyer after she finishes high school. English language skills are important for lawyers who want to practice overseas or deal with international cases, she added.