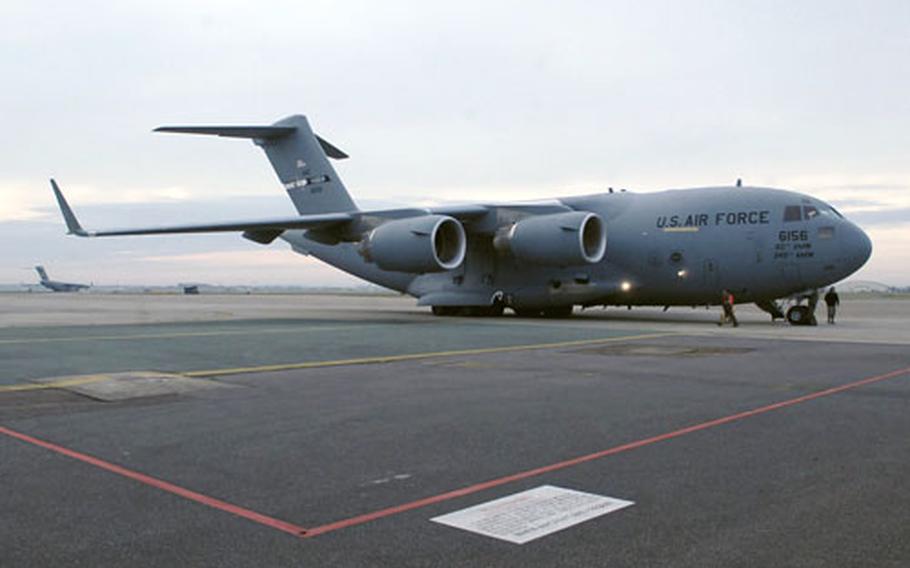 This C-17 Globemaster operated temporarily from RAF Mildenhall, England, while the runway at Incirlik Air Base, Turkey, was being repaved. The last contingent of the 240 visiting airmen from the 817th Airlift Expeditionary Squadron is expected to leave England on Thursday. (Charlie Reed / S&S)

After deploying from Travis Air Force Base, Calif., in late February, the squadron and its eight C-17 Globemasters temporarily set up shop at Mildenhall while Incirlik&#8217;s 10,000-foot runway was being repaved. The last contingent of the 240 visiting airmen &#8212; including support personnel from Incirlik and McChord Air Force Base, Wash. &#8212; was expected to leave England on Thursday night.

Tasked with delivering supplies and equipment in Iraq and Afghanistan under Air Mobility Command, the crew&#8217;s presence significantly increased air traffic at Mildenhall along with the workload for the airmen behind the scenes

&#8220;The guys were working really hard,&#8221; he said, adding that 90 percent of flights were on time during the sharp spike in operations.

A steady stream of Boeing 747s delivering the downrange-bound cargo from the States also added to the traffic. The round-the-clock missions had support crews working 12-hour shifts to maintain, clean and restock, load and provide command-and-control support for the constant flow of aircraft, Whatley said.