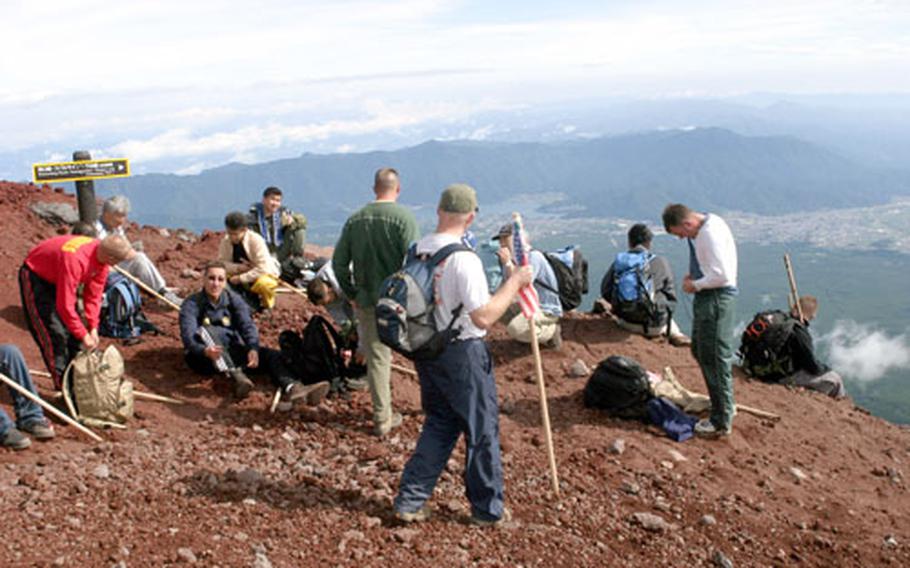 Welcome Marine Program participants, former Secretary General of the Japan Defense Agency Gen Nakatani and members of the Japanese Ground Self-Defense Force rest during their descent from the top of Mt. Fuji on July 18. (Courtesy of U.S. Marine Corps) 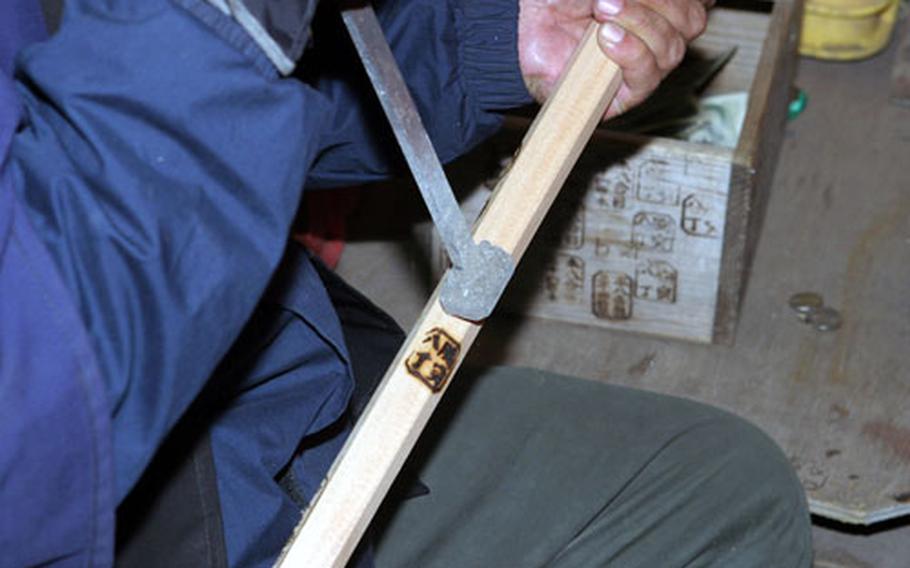 Welcome Marine Program participants had their walking sticks branded with unique stamps at each of the mountain’s 10 stations, including the summit, to show the world how far up the mountain they made it. (Courtesy of U.S. Marine Corps) The 39 servicemembers who climbed Mount Fuji gather with Gen Nakatani, the former secretary general of the Japanese Defense Agency, while holding the Japanese and the American flags after making the long descent from the top of the mountain on July 18. (Courtesy of U.S. Marine Corps)

TOKYO &#8212; Forty servicemembers from Okinawa served as goodwill ambassadors this week to learn about mainland Japan and to show the Japanese people that not all military guys from Okinawa are bad.

Japanese political journalist Reiko Tamura started the program nine years ago, after two Marines and a sailor raped a 12-year-old girl on Okinawa. The crime launched a wave of resentment and antagonism toward servicemembers, especially Marines, on the island.

After speaking with Marines on Okinawa who pledged to &#8220;shed their blood&#8221; for the Japan-United States alliance if necessary, Tamura saw a need to show opinion leaders, politicians and the business community in Japan that servicemembers deserve support.

&#8220;To show there are wonderful servicemembers,&#8221; she said through an interpreter.

By inviting Marines to Tokyo &#8212; the political and commercial hub of Japan &#8212; she could help counter the rising resentment and allow the servicemembers a chance to experience Japanese culture.

The first year, only Marines were invited, but Tamura opened it to all services the year after and added a Mount Fuji climb, one of the trip&#8217;s highlights.

The participants favored the climb along with the cultural stops, including attending a Buddhist ceremony at a temple in Kamakura and a home visit with Japanese host families.

&#8220;I felt like it was an honor to be part of this,&#8221; said Petty Officer 1st Class Jesus Vargas, a constructionman with Fleet Activity Okinawa, after the home visit.

During the visit, he and other servicemembers gave a short English lesson to children, toured a pickle factory owned by a host family and stayed at their house &#8212; experiencing Japanese customs such as sleeping on a futon and eating traditional foods.

The trip also gave servicemembers a chance to meet and socialize with members of other services. Vargas and Lucero do similar jobs and live on the same air base but never would have had a chance to meet before. They intend to stay in touch when they return home. They also plan to share their experiences with others.

&#8220;I truly believe this program has a tremendous impact on not only us but the people we encounter back in Okinawa and the people we met here,&#8221; Vargas said.

Tamura continues using Marines in the program&#8217;s name, even though all services participate, because many Japanese people lump all Americans into one category and call them Marines. Especially if one commits a crime, she noted. That isn&#8217;t lost on participants, who were glad for a chance to challenge the stereotype.

&#8220;They needed to show the people that not all Marines are bad,&#8221; said Lance Cpl. James Palmer, with the 1st Marine Aircraft Wing at Futenma Marine Corps Air Station, and the recipient of the 2004 Welcome Marine Program college scholarship.

Everyone the participants encountered showed them great respect, more than they&#8217;d receive at home, he said. &#8220;I felt very welcomed.&#8221; The program stays afloat through Tamura&#8217;s countless hours spent organizing and fund raising and contributing her own money &#8212; she pays about $20,000 of the estimated $200,000 it costs a year to run the program.

She began a nonprofit group called US-Japan LINK and through it collects contributions from local businesses and politicians to help fund the rest.

Servicemembers are selected by their commands. Those usually chosen are upstanding noncommissioned officers, along with one young servicemember awarded the scholarship.

A few years ago, the program caught the eye of President Bush, who sent Tamura several greetings and thanks for her support.

&#8220;I appreciate Reiko Tamura and the organizers of the Welcome Marine Program for once again sharing Japan&#8217;s rich heritage with our military personnel and enhancing mutual understanding between our two countries,&#8221; the president wrote.

For many servicemembers, the trip is one of their only chances to see Japan beyond Okinawa. Palmer delayed returning to the United States with his unit, which left Okinawa recently, to complete the trip and receive his scholarship.