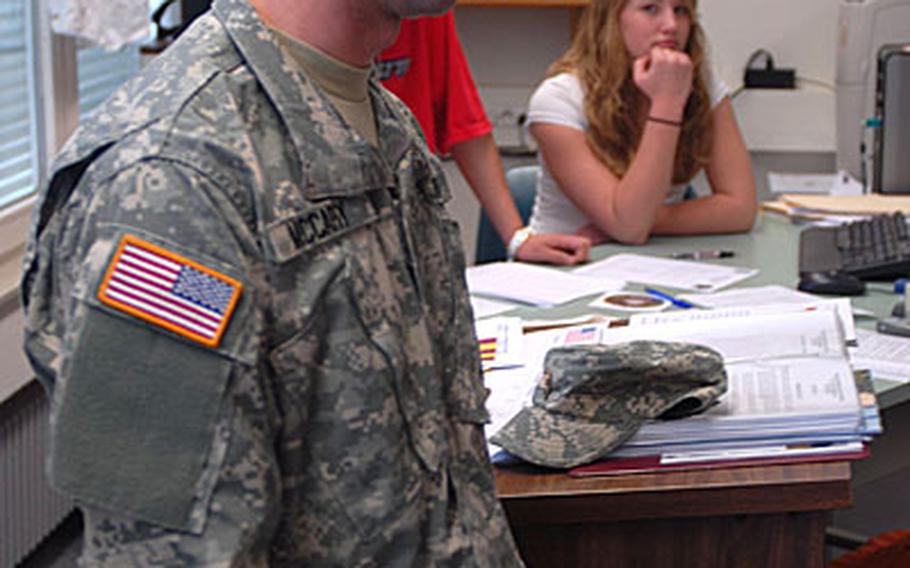 VILSECK, Germany &#8212; Wild college parties are not a feature of a West Point education, but enduring friendships and competitive sports are, according to West Point cadets who spoke Wednesday to Vilseck High School students.

West Pointers Derek Brown and William McCary told members of Vilseck&#8217;s Junior ROTC what they can expect from the military academy, which is north of New York City.

&#8220;You don&#8217;t have a lot of wild party life that other college students have, but I have made friends for life with some of my classmates,&#8221; said Brown. The trainee officer is in Germany on spring break to see off his brother, 1st Lt. Travis Brown, who&#8217;s headed to Afghanistan with the 173rd Airborne Brigade.

Sports are heavily emphasized at West Point, added Brown, who plays on the school&#8217;s sprint football team for players under 175 pounds. Boxing is mandatory, he told the high schoolers.

&#8220;You are at the bottom of the barrel. You are going to have upper classmen yell at you because you did something wrong. In plebe year you are not going to leave West Point unless it is Christmas vacation or you are on a club trip,&#8221; he said.

Plebes take out the trash in their dormitory, do laundry for senior cadets and turn out their lights by midnight. They are not allowed to own an Xbox or a television set and cannot listen to music during their first six weeks at the school, McCary said.

The Vilseck students were relieved to learn that cadets are allowed to access the Internet.

&#8220;If you are not great academically you can make up for it if you are a great athlete. Try to be active in a lot of things. They want someone who is well-balanced,&#8221; Brown said.

Brown said cadets receive a stipend to attend the school but must pay back the cost of their education through military service. Regular commissioned officers owe five years&#8217; active duty and three years&#8217; Reserve service but Brown and McCary chose to become aviation officers, which requires a commitment of 7&#189; years&#8217; active service.

Once West Pointers fulfill their service obligation, they are free to pursue civilian careers, said McCary, adding that many graduates become successful in law and business.

One of those listening, 11th-grader Michael Vazquez, 16, said he used to live near West Point when his father was an engineering professor&#8217;s assistant there.

Vazquez said he&#8217;s thinking of joining the Army as an enlisted soldier to gain experience and then applying for West Point.

Another Vilseck High schooler, 11th-grader Cassie Blakeney, 16, said she plans to attend a short leadership training course at West Point. If she likes it she will apply to study pre-medicine there, she said.