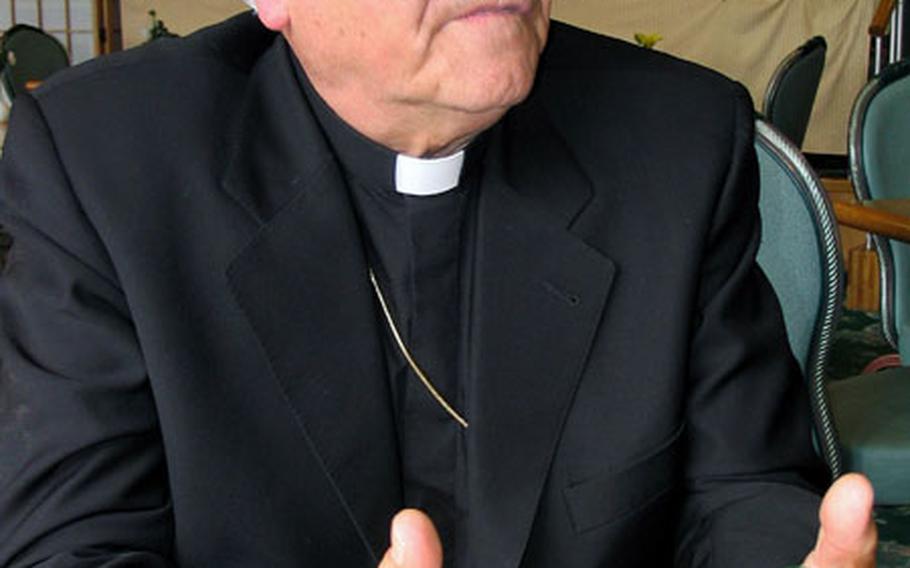 Bishop Joseph Madera, shown at Sasebo Naval Base Saturday afternoon, is the Auxiliary Bishop for the Roman Catholic Archdiocese for the Military Services. The archdiocese is responsible for the pastoral care of more than 2.5 million Catholic men and women serving in the U.S. military, their families, residents of Department of Veteran Affairs hospitals and civilian employees of the U.S. government living abroad. (Greg Tyler / S&S)

Serving as a &#8220;moral compass&#8221; is among the primary responsibilities of command chaplains, including those with units fighting in Iraq, Joseph J. Madera, an auxiliary bishop for the Roman Catholic Archdiocese for the Military Services, said during a weekend visit here.

&#8220;This is when we have to encourage commanders and point out that this is not the moral way to continue, that this cannot be the way to proceed because this is not the way of treating fellow human beings,&#8221; he said Saturday.

The Archdiocese for the Military Services is responsible for the pastoral and spiritual care of about 2 million Catholic men and women in the U.S. military and their families at 220 installations in 29 countries, patients at 172 Department of Veterans Affairs hospitals and civilian employees of the federal government serving in 134 countries.

Madera, 77, whose first stop on an Asia-Pacific tour was in Singapore, visited Sasebo in part to confirm 17 individuals following their completion of the Rite of Christian Initiation for Adults. He&#8217;s also been to Misawa Air Base, Yokosuka Naval Base, Atsugi Naval Air Facility, Yokota Air Base and Iwakuni Marine Corps Air Station on his swing through Japan.

Before returning to the archdiocese headquarters in Washington, he&#8217;ll hit Okinawa, South Korea, Guam and Hawaii.

Born in Los Angeles and raised in Mexico, Madera is one of three auxiliary bishops. He serves as the Vicar for Pastoral Matters and advises Catholic chaplains involved with ongoing base ministries, as well as those rotating from locations where U.S. troops are fighting.

&#8220;We try to solve problems of conscience that many have because our responsibility as Catholics is charity, and not international affairs. The archbishop has been very clear about this, because the chaplains have come to serve our country,&#8221; Madera said, referring to archbishop Edwin O&#8217;Brien, head of the archdiocese.

Chaplains &#8220;have the responsibility to their commands as the morality of the system. &#8230; Sometimes, this is seen when acts of charity result in commanders obtaining essential information&#8221; that helps achieve military goals, he added.

Madera pointed to the case of an injured Iraqi man captured by U.S. soldiers who developed gangrene in his leg. Without treatment, he faced amputation or possible death in the Iraq heat. A high-ranking servicemember told the man to walk 20 yards to 30 yards across the area to an infirmary for treatment.

&#8220;But the man would not go,&#8221; Madera said. &#8220;The man was afraid that if he walked to the infirmary, the American would shoot him in the back. He would rather stay where he was than go get the treatment he needed to live.

&#8220;A chaplain witnessed this, and quietly spoke to this injured man. He told the man he had to get the medicine. He told him in a spirit of charity that he had to trust the soldier, and if he liked, he would walk with him &#8212; right behind him, in front or wherever. But the chaplain said the man must trust him.&#8221;

The Iraqi finally stood and went to the infirmary with the chaplain, who stayed with him for hours until the treatment was administered and the man&#8217;s condition improved.

&#8220;So in these cases, when the Americans are to approach a building, or travel a road in the area, commanders learn from community members that it is a trap. Lives are saved because this charity was genuine,&#8221; he added.

The archdiocese also is concerned with the strain placed on families when a servicemember is deployed on long tours in war torn areas.

&#8220;I have four cases right now involving serious marriage problems &#8230; good marriages being destroyed. One of these marriages is already lost, and I&#8217;m afraid another may also be lost,&#8221; Madera said. &#8220;One case involves a husband in Iraq. He has two teenage sons back at the home living with their mother. The sons have always looked up to their father almost like a hero. The father in Iraq is already living with an Iraqi woman.

&#8220;The phone calls are the only way they stay in touch when separated by this situation. The wife called, and by mistake, the Iraqi woman answered the phone. Then, the woman mocked the wife, insulting her, saying she had her husband now, and that she could not hold on to her husband.&#8221;

The result, Madera said sadly, is that the sons no longer embrace their father. &#8220;One said he doesn&#8217;t care if the father is killed there in Iraq. This marriage, this family, is lost.&#8221;

During Desert Storm, chaplains noted a divorce rate of 12 percent. That appears to be significantly higher today because of the war on terrorism, he added.

&#8220;The Internet is the worst enemy with these situations. It allows the one looking for consolation to find it almost instantly. This is a very special concern,&#8221; Madera said, adding that chaplains should closely monitor the possibility of these problems at their bases and encourage support.

In the United States and Europe, the Military Council of Catholic Women is available for support and spiritual encouragement. For instance, if a spouse on a base loses her husband, the MCCW can offer spiritual and practical help to the widow.

A chapter formed on Okinawa as news of probable Iraq deployments reached the island, according to Lt. William Onu, a Catholic chaplain at Sasebo.

The bishop said he hopes to see Catholic women at U.S. facilities in mainland Japan organize an MCCW.

&#8226; The archdiocese is not a governmental or military agency and does not receive any funds from government sources.&#8226; It cannot tax its chapel parishes, as do other dioceses.&#8226; Despite approximately 2 million Catholics within its purview, only 366 priests serve as active-duty military chaplains.&#8226; There are only 86 priests serving full time in the Veterans Administration.&#8226; Priests are serving full time as chaplains on loan from 142 dioceses and 44 religious communities.&#8226; The Archdiocese is the largest in the Roman Catholic Church.&#8226; It is transnational without boundaries, and is present throughout the world wherever American military personnel are stationed, or federal employees serve.