Sgt. Nicolas Moreno, a soldier from the 1st Engineering Battalion, works on a craft with Benjamin Pendergast and Marissa Engleman on Thursday at Ramstein Elementary School. (Ben Bloker / S&S)

Sgt. Nicolas Moreno, a soldier from the 1st Engineering Battalion, works on a craft with Benjamin Pendergast and Marissa Engleman on Thursday at Ramstein Elementary School. (Ben Bloker / S&S) 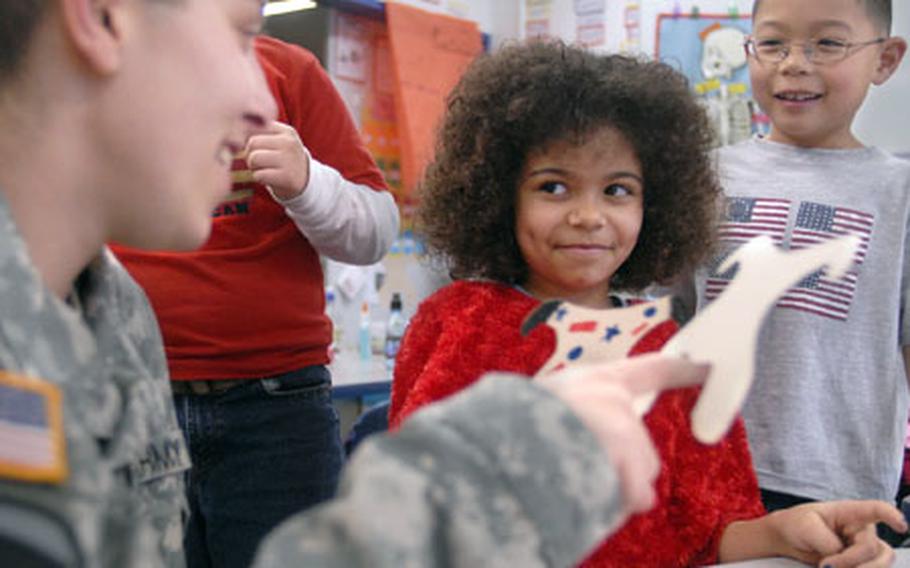 RAMSTEIN, Germany &#8212; It was enough to bring a strapping soldier to the verge of tears.

A classroom full of second-graders at Ramstein Elementary School sang a patriotic song for a handful of wounded soldiers, who not that long ago were serving downrange.

The visit is part of a monthly trip wounded soldiers, receiving care at Landstuhl Regional Medical Center and staying at the medical transient detachment on Kleber Kaserne, make to the young students.

In the little more than a year since the medical transient detachment began the program, some soldiers have been so touched by the experience that they have given the students their combat patches.

As the kids sang and danced along to the music Thursday, the soldiers standing in front of Colleen Luckie&#8217;s second- grade class savored the moment. It could have induced goose bumps on the hardest of soldiers.

Pfc. Travis Hooker, 22, said he almost cried when listening to the kids sing.

It&#8217;s obvious that the visits are more than just a morale boost for the outpatient soldiers suffering relatively minor injuries. The youths&#8217; bright smiles are infectious among the soldiers.

And it&#8217;s not just the soldiers who benefit from the trip. The kids look forward to the visits every month, Luckie said.

In Kathy Maxey&#8217;s second-grade classroom, another group of visiting soldiers checked out the kids&#8217; handmade Easter cards. They also decorated paper cutouts to be used later in a science experiment on gravity. While coloring the paper, 7-year-old Kira Chinapen leaned over to Sgt. Daniel Delgado, who suffered burns to his face, right wrist and leg during a roadside bomb blast in Iraq not long ago. The second-grader had a joke for Delgado.