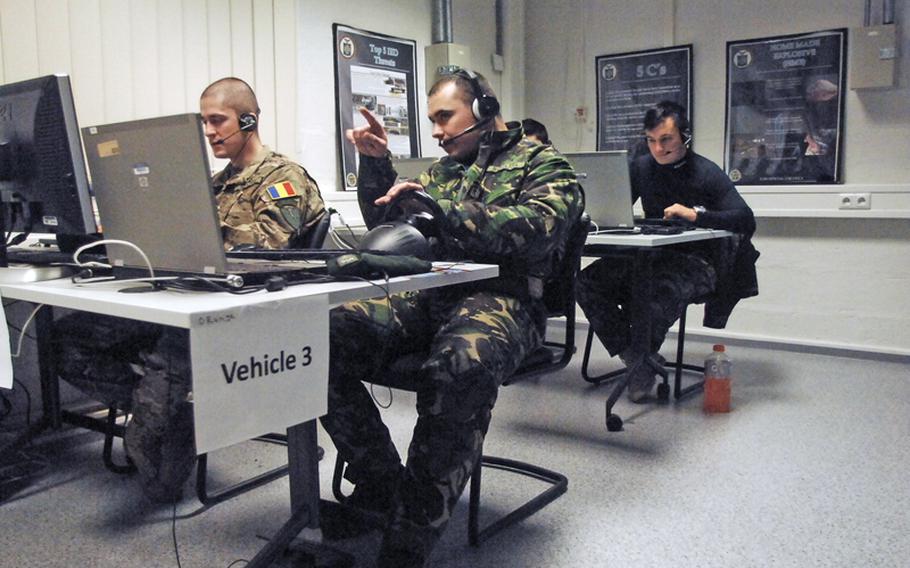 Multinational soldiers train on tactical video games at the Joint Multinational Simulation Center in Grafenwoehr in December. Trainers say such simulations will play a larger role in the Army&#39;s future, as dwell time and home station training increase. (Steven Beardsley/Stars and Stripes)

Multinational soldiers train on tactical video games at the Joint Multinational Simulation Center in Grafenwoehr in December. Trainers say such simulations will play a larger role in the Army&#39;s future, as dwell time and home station training increase. (Steven Beardsley/Stars and Stripes) 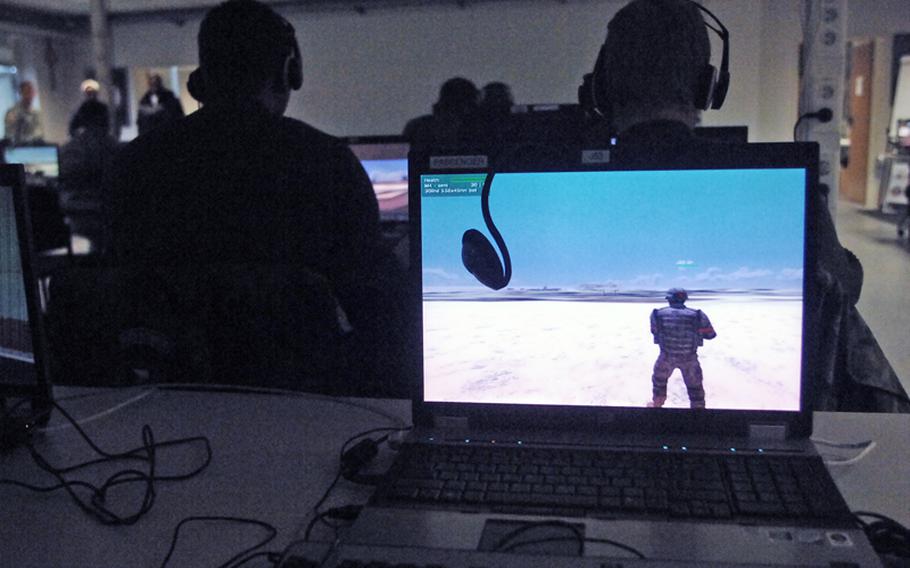 Soldiers train on a tactical video game at the Joint Multinational Simulation Center in Grafenwoehr in December. Trainers say games such as Virtual Battlespace 2, shown here, will play a greater role in the Army’s future, as home station training increases. (Steven Beardsley/Stars and Stripes) 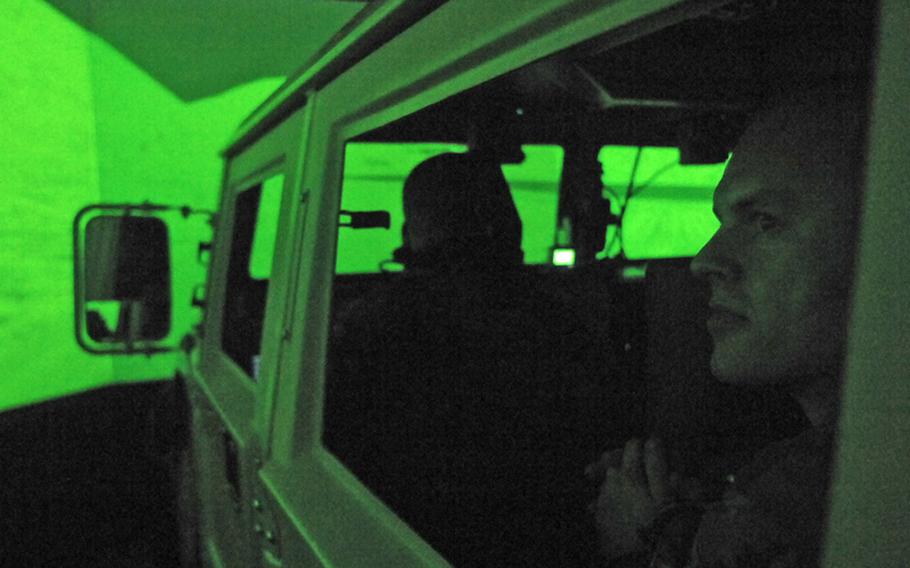 A soldier scans a virtual roadside for signs of danger during a training exercise in the Reconfigurable Vehicle Tactical Trainer in Grafenwoehr in December. The Army will begin fielding a virtual system for dismounted soldiers later this year, with plans to have it made interoperable with vehicle simulators such as the RVTT. (Steven Beardsley/Stars and Stripes)

The costs of ammunition and fuel add up; wear and tear shorten the lifespan of vehicles and weapons systems.

As the Pentagon scales back amid looming budget cuts, it envisions a smaller, more flexible and technologically advanced force. Some trainers say improved virtual systems, better games and larger simulations at home stations, as opposed to training centers, will play a greater role in preparing soldiers for future battles.

Trainers are encouraged by several developments. This year, the Army will field its first virtual simulator for dismounted soldiers. Networking between simulators is expected to improve in coming years. Meanwhile, trainers say they are using more real-world and combat data to build increasingly complicated simulations.

Last February, Chairman of the Joint Chiefs of Staff Gen. Martin Dempsey, then head of the Army&rsquo;s Training and Doctrine Command, called for a &ldquo;revolution&rdquo; in home station training as more soldiers return to their garrisons for longer dwell times following drawdowns in the Middle East.

&ldquo;It&rsquo;s going to have to happen, not only because of dwell times, but because of financial resources,&rdquo; Dave Darnall, program manager for Training Support Activity Europe in Grafenw&ouml;hr, said of a larger role for simulations. &ldquo;Commanders aren&rsquo;t going to have the money to roll around.&rdquo;

This summer, Darnall expects to receive the military&rsquo;s first widely fielded simulator for soldiers on foot, the Dismounted Soldier Training System. Capable of exercising a squad of up to nine soldiers at once, the system relies in part on decades of Army research into virtual reality, said Floyd West, program manager for developer Intelligent Decisions.

It uses a monitor headset that straps over or under a helmet and noise-canceling headphones to create an immersive environment, body sensors to capture position and a small joystick to register movement.

&ldquo;They can hear the tracer rounds flying past their ears,&rdquo; West said.

The company plans to field 30 of the systems to Army installations before Sept. 30, West said.

The system is being designed to eventually link with other simulators for more complex training scenarios. In theory, a dismounted squad will be able to train in the same virtual environment as scouts in a Humvee simulator or a medevac crew in a helicopter simulator.

Compatibility has long been a challenge for virtual simulators, said Darnall. Because the devices were developed at different times and with unique software, each interpreted the same terrain differently when connected. He recalled an instance in which the pilot of a helicopter simulator was able to see an enemy tank avatar between the trees below; the driver of the tank, meanwhile, saw only an umbrella of green overhead in his simulator.

The Army hopes to resolve such problems with improved network architecture, including a graphics generator called Synthetic Environment Core, which several experts said forces virtual simulators to show the same terrain when linked together.

The Army&rsquo;s long-term goal is to connect all of its simulators &mdash; from virtual devices to video games to battle command simulations &mdash; to create an &ldquo;integrated training environment&rdquo; that can exercise every unit within a brigade at the same time, said Devin Lyders, assistant program manager for the project at the Army&rsquo;s Program Executive Office for Simulation, Training and Instrumentation.

Lyders imagines battalion and brigade staffs training at battle command simulations while companies, platoons and squads execute the ordered tasks through linked video games, virtual simulators or live exercises. The data from those exercises would then be fed back to each command staff for real-time decision-making.

&ldquo;You&rsquo;re training from brigade down to some level of maybe even a squad simulation, in a single training event, without having to employ your entire brigade in a live arena,&rdquo; he said.

Lyders said he expects the project to survive any changes in the Army&rsquo;s future budgets.

Jim Slavin heads the Training Brain Operations Center, an office established in 2008 within the Training and Doctrine Command to create better training scenarios through the use of declassified data. He recently pulled data generated from October&rsquo;s Full Spectrum live exercise in Hohenfels to feed into a stateside simulation.

With improved home station simulators, particularly video games, soldiers are now seeing a level of complexity on their computer screens that compares to what they see at training centers, Slavin said. &ldquo;They want that, they expect that, and the technology is there to do that,&rdquo; he said.

Challenges exist. Grafenw&ouml;hr has been expecting the dismounted simulator for more than two years, Darnall said. Equipment often takes time to reach home stations due to procurement issues, while technology continues to evolve, he said. The graphics and details of many commercial video games are superior to those of their military counterparts.

&ldquo;The Army procurement system can&rsquo;t always keep up with technology,&rdquo; Darnall said. &ldquo;We do our best, and sometimes we&rsquo;re cutting the edge of what these things can do. Other times we&rsquo;re not.&rdquo;

Simulations also have their limits. Even the best avatars are programmed with a finite number of responses. In vehicle simulators, avatars still do little more than dart across the road or open fire.

Live training will never be replaced, Darnall and others say. Yet they believe technology can shoulder more of the training load, allowing soldiers to develop skills before tackling them on the ranges.

&ldquo;I think if you ask any commander what kind of training they prefer, they&rsquo;d say live training,&rdquo; said Lyders. &ldquo;Unfortunately, we won&rsquo;t have the funding to do that all the time.&rdquo;