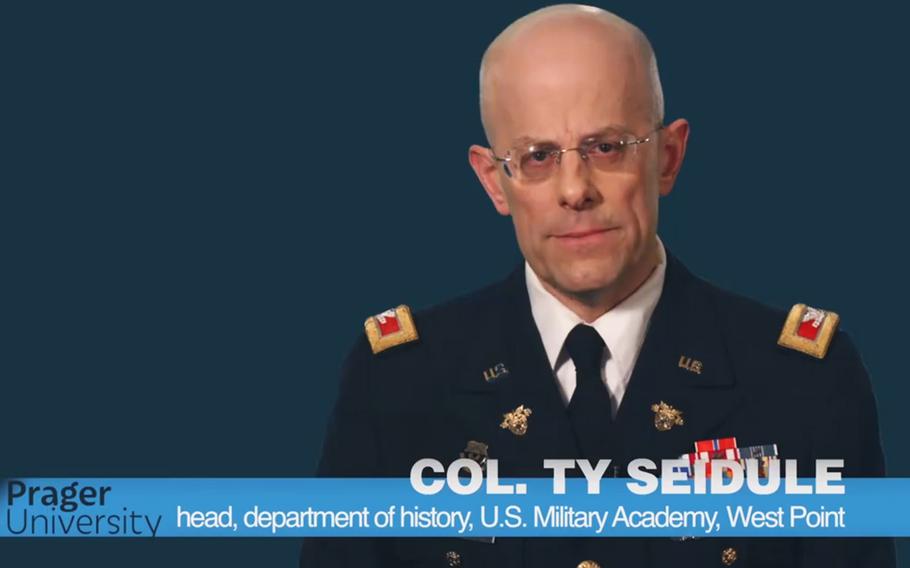 Col. Ty Seidule of the U.S. Military Academy's history department, in a screen capture from the Prager University website's video about the origins of the Civil War. ()

WASHINGTON — A West Point professor hit an Internet home run this week when a video featuring the head of the academy’s history department talking about slavery and the Civil War went viral.

With more than 4 million views on Facebook by midday Wednesday, the video vaulted Col. Ty Seidule and producer Prager University into the public spotlight. But the Army professor’s appearance in his service uniform to explain the history of slavery in the South also put the storied service academy close to a conservative group that posts right-wing video “courses” on the Internet.

Prager University published a similar video earlier this month suggesting President Barack Obama and Secretary of State John Kerry are similar to Nazi appeasers during World War II for supporting an Iran nuclear deal. Other videos argue white people who sympathize with Ferguson rioters are worse than white supremacists and that violence against women is largely an unsupported myth.

Seidule told Stars and Stripes that he was not aware of Prager’s political leanings when he wrote a brief article and agreed to do a video for the group in March. He said it was among 15-20 media appearances he made to promote the release last fall of the book “West Point’s History of the Civil War.’’

“What I was trying to do … was trying to show others how we educate, train and inspire our cadets at West Point,” Seidule said. “I hope that this helps others of all political stripes.”

The video was a straightforward recounting of Southern seccession over slavery that apparently resonated online in the wake of the national Confederate flag debate. But Seidule said he was surprised by the viral response and that a short history lecture received so much attention — generating one of Prager’s biggest online hits.

“I don’t know that I have an answer to that — was it worth it or not? Getting ideas out seems like a valuable thing if they are ideas that make people think about themselves and their history,” he said.

“I certainly wanted to help the Army and West Point in any way.”

On its website, Prager now lists Seidule as faculty, along with a variety of others who have done short videos including lawyer Alan Dershowitz and comedian Adam Carolla. Seidule said he was not paid for the appearance.

The group was founded as a nonprofit by Dennis Prager, a conservative columnist and radio host, and describes itself as an online educational service. It is not accredited, has no physical teaching facilities and has “courses” consisting of five-minute videos posted to its site as well as YouTube and Facebook.

Allen Estrin, the CEO of Prager University, insisted the group has no political agenda.

Prager University’s video on the Iran nuclear deal, which features the group’s founder, compares supporters to diplomats who appeased Adolf Hitler and the Nazis in the lead-up to World War II and includes cartoon silhouettes of Obama and Kerry shaking hands with Iranian leaders.

“Very few people have a chance to do something about the greatest evil of their time. When it votes on this agreement, the American Congress has that chance,” Prager says at the end of the video.

Congress is now divided — mostly along party lines — over the deal and may soon decide whether to reject it.

In another video, black pro-Israel activist Chloe Valdary argues that white people who sympathize with the black residents of Ferguson, Mo., who rioted after the shooting of Michael Brown are guilty of racism and treating blacks like children.

A video course by Christina Hoff Sommers, a critic of feminism and resident scholar at the conservative American Enterprise Institute, claims that there is little evidence of violence against women, the income gap between men and women, eating disorders and female depression.

“Over the years, I have looked carefully at many of these claims and what I have found is that much of the supporting evidence — mostly victim statistics — is misleading and often flat-out wrong,” Sommers says.

She says the perception that women are struggling for equality has been created by female college professors, women in the media and the National Organization for Women, an advocacy group for women’s rights.

Still, the nonprofit status of Prager University does not prohibit it from speaking on political issues — it is barred from promoting political candidates. Estrin did say the group leans conservative but that the videos on Ferguson and feminism are more mainstream conservative thought than far right.

Servicemembers are forbidden from participating in political activities while in uniform.

“Soldiers are prohibited from wearing their Army uniform in connection with the furtherance of any political or commercial interests; when participating in public speeches, interviews, picket lines, marches, rallies, or public demonstrations except those that have been appropriately authorized,” Army spokesman Wayne Hall wrote in an email to Stars and Stripes.

It remains unclear whether Seidule’s appearance and new listing as Prager faculty steps over a line.

Army regulations allow Seidule and others to make such media appearances, according to the service academy.

West Point spokeswoman Theresa Brinkerhoff said the faculty appears in a variety of media as subject experts, including publications such as Rolling Stone and the New Yorker, and that it would look into the decision to clear Seidule’s appearance.

“We don’t endorse any group of any nature when we are doing these things,” she said.