Morning rush hour traffic on the streets of Seoul, as seen from the window of a U.S. Army Black Hawk helicopter. (Franklin Fisher / S&S)

Morning rush hour traffic on the streets of Seoul, as seen from the window of a U.S. Army Black Hawk helicopter. (Franklin Fisher / S&S) 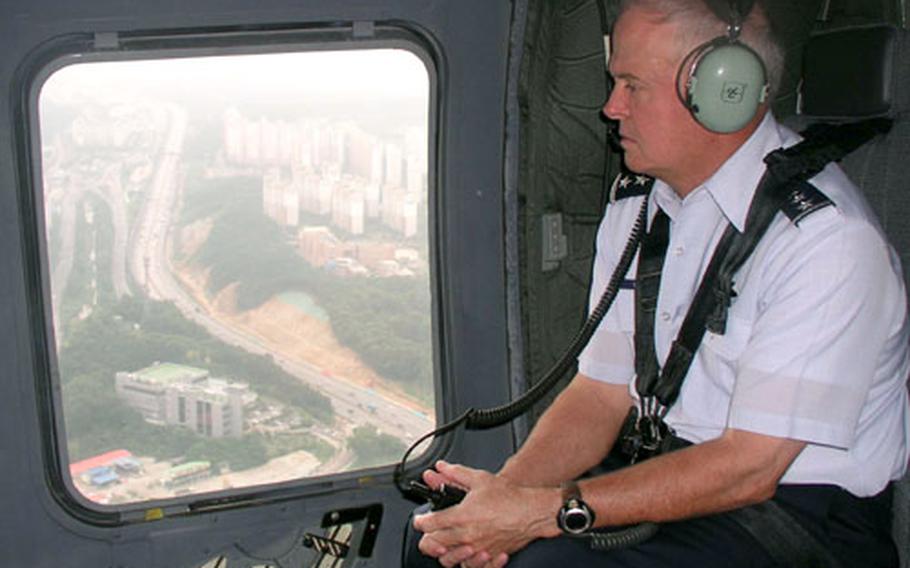 SEOUL &#8212; Army flight crews will tell you right away that flying the brass from place to place in South Korea isn&#8217;t where the glamour is.

But that doesn&#8217;t mean they don&#8217;t like it. Getting generals and other VIPs where they need to go helps the U.S. military tend to daily business on the peninsula, say air crews of the Army&#8217;s 2nd Combat Aviation Brigade.

And any chance to log flying hours is a good thing, they say.

The VIP mission is of big benefit, they say, if a passenger has to get somewhere at rush hour, especially in a bustling metropolis like Seoul, notorious for its traffic congestion. The same holds for the brigade&#8217;s medical evacuation flights, which can get a passenger to the emergency room far faster than an ambulance on the ground, they say.

Thompson is with the brigade&#8217;s Company C, 2nd Battalion, 2nd Aviation Regiment, based at K-16 Air Base.

He and two other Company C aviators were the air crew for one recent flight that took Air Force Lt. Gen. Stephen G. Wood, commander of 7th Air Force (Air Forces Korea), to Yongsan Garrison in Seoul. Wood is also deputy commander of U.S. Forces Korea. Those posts make him the top U.S. Air Force general in South Korea and the No. 2 U.S. military officer on the peninsula. Flying with Wood was his aide, South Korean air force Maj. Lee Jung-geun.

They flew north at about 120 knots, 1,000 feet above Gyeonggi Province. Below, they passed broad green tracts of rice fields, clusters of white high-rise apartment complexes, highways and side roads, and small industrial parks where the metal roofs of outbuildings were bright orange or blue.

Along the way were the rolling green hills and ridgelines of the countryside.

Then, in what seemed very little time, they were over the densely packed sprawl of metropolitan Seoul with its houses and corporate high-rises and the Han River spanned by a succession of bridges. Buses, cars and trucks made their way forward at rush hour.

If, Thompson said later, a general needed to drive from Camp Humphreys to Yongsan, it might take two-and-a-half hours.