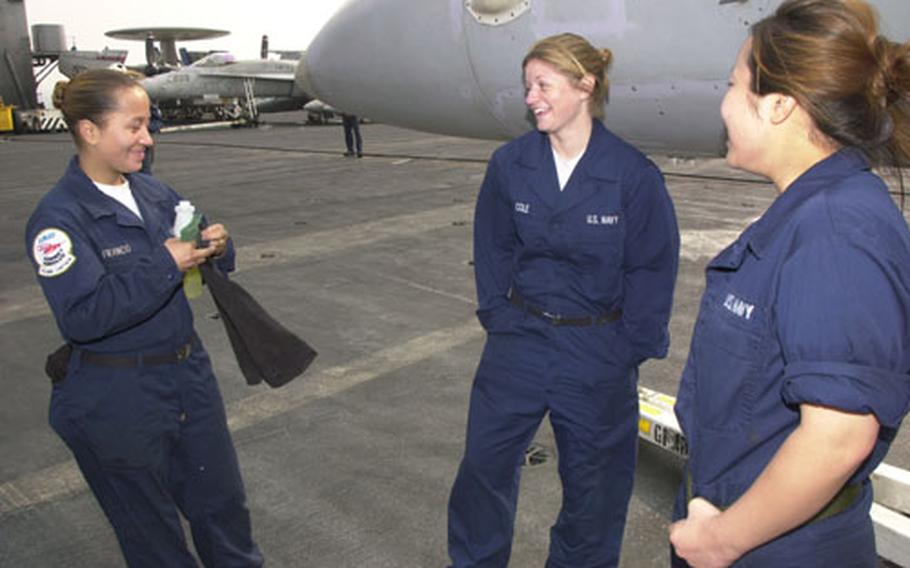 Jessica Franco (l-r), Andrea Cole, and Youliah Kwon, had reason to laugh and smile Saturday morning. The airman aboard the USS Carl Vinson were looking forward to trying some sushi and getting "off this boat" during a port call at Yokosuka Naval Base, Japan. (Jennifer H. Svan / S&S)

Jessica Franco (l-r), Andrea Cole, and Youliah Kwon, had reason to laugh and smile Saturday morning. The airman aboard the USS Carl Vinson were looking forward to trying some sushi and getting "off this boat" during a port call at Yokosuka Naval Base, Japan. (Jennifer H. Svan / S&S) 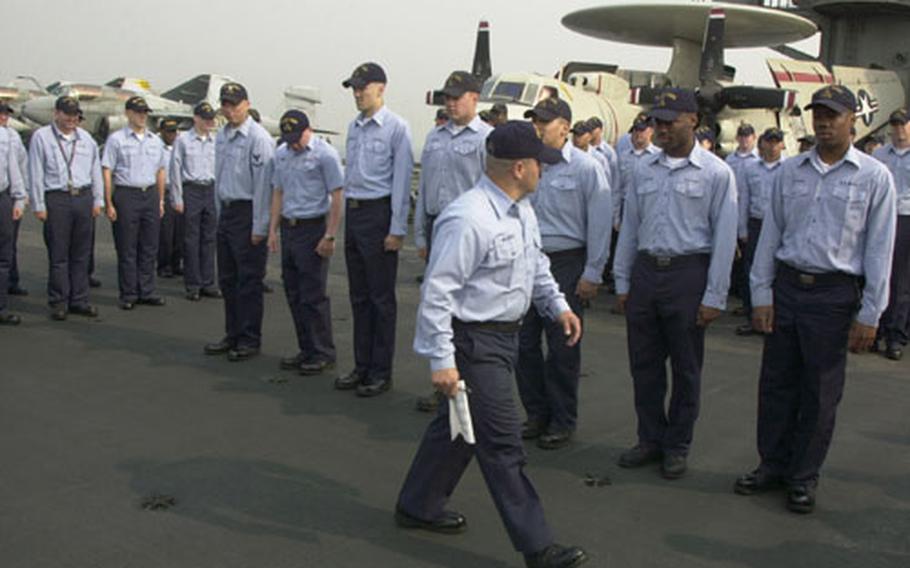 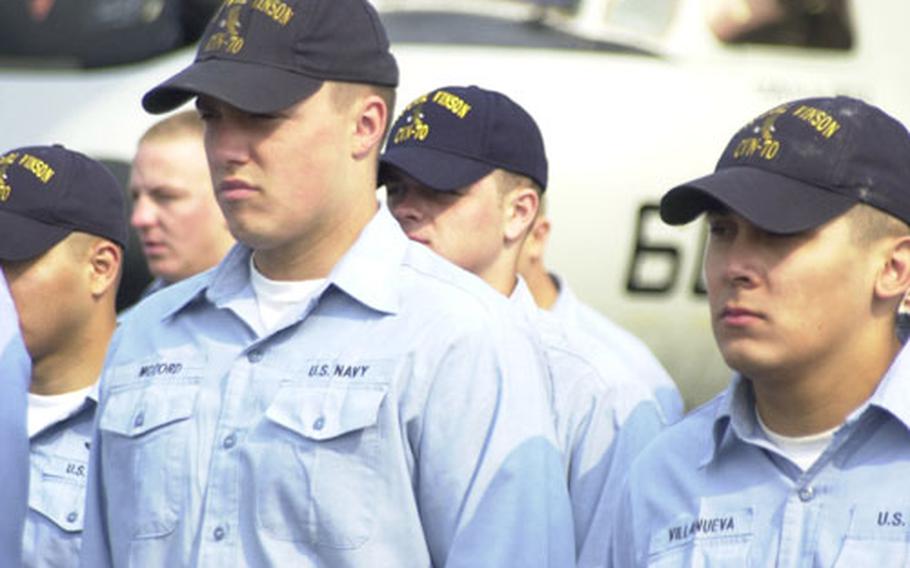 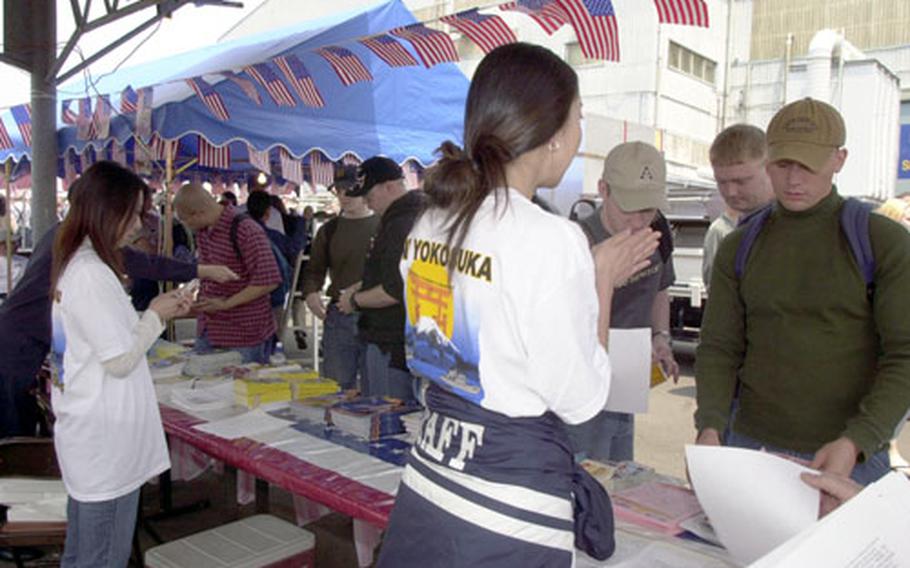 USS Carl Vinson sailors swarm the Morale, Welfare and Recreation tables minutes after disembarking from the liberty boat at Yokosuka Naval Base Saturday. They grabbed up train maps and directions to such tourists spots as Kamakura and Yokohama. (Jennifer H. Svan / S&S)

ABOARD THE USS CARL VINSON &#8212; The place to be on this supercarrier Saturday morning was the flight deck.

Breaking through the mist, on the horizon port side, was a sight that would make even the most hardened sailor smile: land.

The USS Carl Vinson dropped its 60,000-pound anchors shortly after 8 a.m. Saturday in preparation for its fourth port call in the Western Pacific since pulling out of its home port of Bremerton, Wash., on Jan. 13. The ship moored several miles from shore because Yokosuka&#8217;s docks were full: The USS Kitty Hawk and two ships in its battle group returned from the Persian Gulf on Tuesday.

The scheduled port visit was one of the few certainties for the 5,200-member Vinson crew. While many carriers involved in Operation Iraqi Freedom celebrate homecomings, the Vinson will remain in the region indefinitely, Navy officials say.

Sailors don&#8217;t know how long they&#8217;ll be there, but with the Kitty Hawk facing repairs in dry docks and tensions still high on the Korean Peninsula, the crew is bracing for the long haul.

Officials said the Vinson would dock near Yokosuka for &#8220;several days.&#8221; The USS Antietam and USS Ingraham, part of the Carl Vinson Battle Group, were expected to visit the Navy base as well.

A few days of liberty are the next best thing to homecoming for sea-weary sailors. For many on board, it was their first port call in Japan.

Some were intent on a crash course in Japanese culture, with plans to try sushi or see sumo wrestling. Others had their eyes on a piece of Americana.

Recreational activities, such as Morale, Welfare and Recreation tours of Japan, are seen as one way to keep sailors &#8212; cooped up at sea for weeks on end &#8212; out of trouble. The hope, Navy officials say, is that they blow off steam on Disneyland&#8217;s rides, for example, rather than at the bars.

Indeed, the message to behave was drilled into crewmembers hours before liberty call. Throughout the morning Saturday, sailors stood at attention on the flight deck and in the hangar as senior leaders inspected their uniforms and reminded them about the consequences of misconduct.

&#8220;Get in trouble, and the entire ship&#8221; could forgo some liberty privileges, said one officer.

Sailors in the V-1 division, accustomed to working in grease and grime on the flight deck, had to pass an inspection in uniforms free of stains and boots without scratches.

Liberty privileges were at stake.

It&#8217;s likely the Navy doesn&#8217;t want to give anti-nuclear groups in Japan another reason to oppose the presence of the nuclear-powered aircraft carrier so close to their shores. Hundreds of well-behaved Japanese protesters marched outside the front gate of Yokosuka Naval Base on Saturday afternoon, voicing their opposition to the Vinson&#8217;s arrival, the war in Iraq and the presence of American forces in Japan.

Shortly after mooring Saturday, a small vessel chugged near the Vinson with a handful of Japanese protesters. Through a megaphone, someone pleaded with the ship to go home: &#8220;Carl Vinson, what the world needs now is peace. The world doesn&#8217;t need any nuclear weapons.&#8221;

With land so near, not much could irritate the sailors.