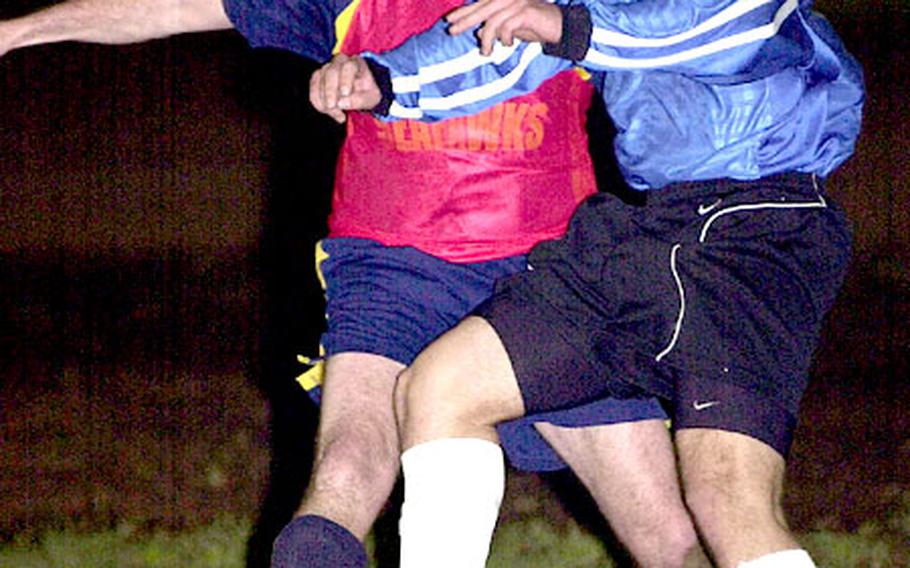 A tiny figure, standing in the parking area on a rise near Ikego&#8217;s main soccer field, waved back and started running toward the team &#8212; a rag-tag collection of seven soccer players from the aircraft carrier USS Carl Vinson, augmented by Nile C. Kinnick High School players.

The high schoolers welcomed George Murray, a junior striker, like a long-lost relative. He&#8217;d arrived moments before the piecemeal Vinson team was to kick off a &#8220;friendly&#8221; contest with the Yokosuka Seahawks &#8212; a team for which Murray and the four other Red Devils play part-time.

The 5-foot-5 Murray became an instant hero for the Vinson, which celebrated its return from four months at sea with a soccer-field victory.

Murray, who&#8217;s scored a team-leading 13 goals for Kinnick, tallied in the 56th minute. He also assisted on Robert Hurtado&#8217;s tally during stoppage time, as the ship-based team rallied from a 1-0 half-time deficit to win 2-1.

Not everybody, however, greeted Murray&#8217;s performance with enthusiasm.

But he was smiling. This was the first soccer match in a three-day competition among the Vinson, Yokosuka&#8217;s shore-based units and teams from the aircraft carrier USS Kitty Hawk battle group, forward-deployed at Yokosuka.

The cooperative effort by the Morale, Welfare and Recreation divisions at Yokosuka, Ikego and the two battle groups was designed to give Vinson sailors some activities during their brief Yokosuka visit, and some friendly competition between visiting and home units.

While the soccer teams battled at Ikego, at Yokosuka&#8217;s Thew Gym and Berkey Field 30 minutes away, six softball and five basketball squads faced off in similar round-robin of friendly competitions.

&#8220;When the ships come to town, you have an extra 6,000 sailors on the base,&#8221; said Yokosuka MWR sports director Kyle Rhodus. &#8220;To schedule games like these not only gives them something to do, it builds cohesion and camaraderie between ships.&#8221;

Vinson sailors said the games provided a nice break from four months of filling in for the Kitty Hawk during its Persian Gulf deployment to support Operation Iraqi Freedom.

Despite the victory, the Vinson team had little practice time before stepping on the field, Hubbs said.

And although the Vinson fields two teams with a total of 24 players, only seven showed for Sunday&#8217;s contest.

Even for the Seahawks, the competition was a nice break from the Japanese teams that are their usual opponents.