The USS Carl Vinson prepares to drop anchor off the coast of Yokosuka Naval Base. The Vinson brings more than 6,000 sailors on a scheduled port visit. (Joseph Giordono / S&S)

The USS Carl Vinson prepares to drop anchor off the coast of Yokosuka Naval Base. The Vinson brings more than 6,000 sailors on a scheduled port visit. (Joseph Giordono / S&S) 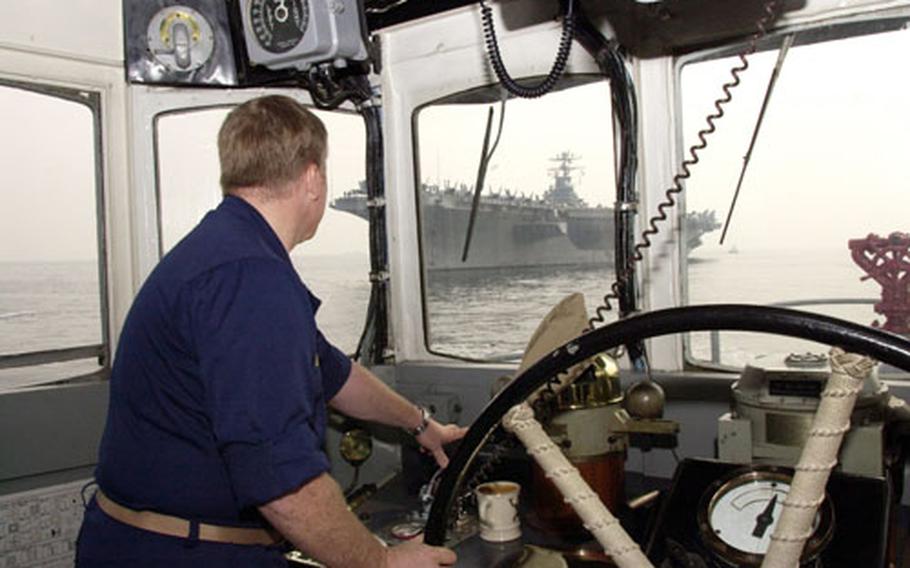 A bow shot of the USS Carl Vinson at anchorage as Yokosuka Port Operations postions a barge to its side. The Vinson Battle Group arrived at Yokosuka Naval Base Saturday. (Jim Schulz / S&S) 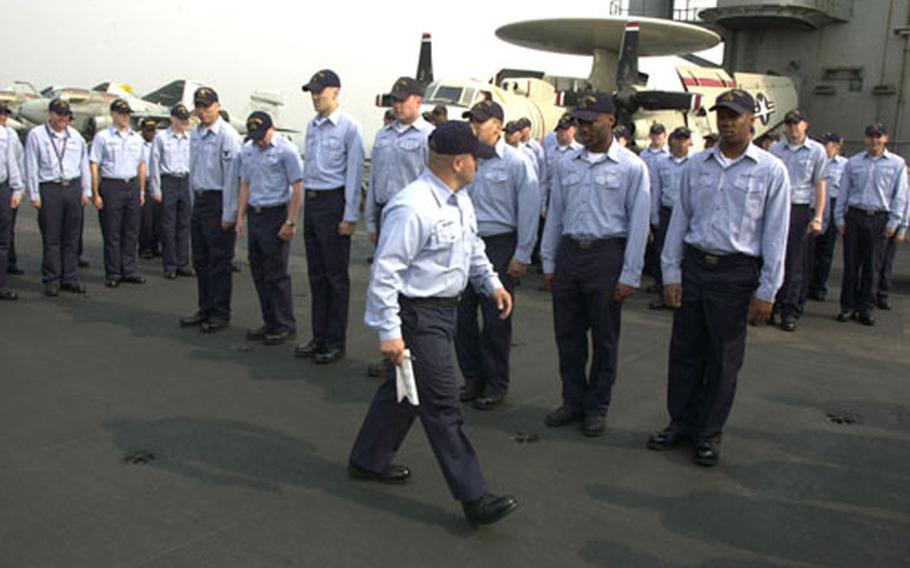 Japanese protesters march toward the front gate of Yokosuka Naval Base on Saturday. (Joseph Giordono / S&S)

YOKOSUKA NAVAL BASE, Japan &#8212; Just days after absorbing almost 6,000 sailors back from deployments to the Persian Gulf, Yokosuka got 6,000 more.

On Saturday, the USS Carl Vinson anchored in waters just off the base, disgorging thousands of sailors on liberty boats for a scheduled port visit.

The nuclear-powered aircraft carrier from Bremerton, Wash., put to sea Jan. 13. Since February, it has been operating in the Western Pacific, &#8220;back-filling&#8221; for the USS Kitty Hawk, which was dispatched to the Persian Gulf.

Yokosuka officials said they were ready for the influx; a variety of tours, activities and events are planned for Vinson crewmembers. Base residents expect long lines at cash machines, eateries and stores.

Asked about preparations, base spokesman Mike Chase ran down a list of Morale, Welfare and Recreation events and said retail store hours would be expanded to accommodate the temporary increase.

The Vinson visit also could mean big money for local establishments. When the ship made a port call to Guam in April, Chamber of Commerce officials said the sailors pumped up to $500,000 per day into the local economy.

Anti-nuclear protestors &#8212; organizers say they expect up to 2,000 &#8212; are expected to gather in Yokosuka and demonstrate against the ship&#8217;s arrival. In recent months, Japanese media has been rife with speculation that when the Kitty Hawk is decommissioned, a nuclear-powered carrier will replace it.

Navy officials consistently have denied any decision has been made about the Kitty Hawk&#8217;s replacement, scheduled to happen in 2007 or 2008.

The last time a nuclear carrier visited Japan was August 2002, when the USS Abraham Lincoln made a five-day stop at Sasebo.

The letter was signed by several political officials including Kanagawa Prefecture&#8217;s governor and Yokohama&#8217;s mayor.

Jon Nylander, a spokesman for U.S. Naval Forces Japan, confirmed the Navy received the letter. He also said he was unsure whether the Vinson&#8217;s aircraft would be flying but said they usually don&#8217;t during port calls or anchorages.

The issue of conduct ashore appears to be a major concern to Navy officials, who&#8217;ve indicated they hope a good-natured rivalry between carrier crews does not turn ugly.

The first game of the 13-team USS Carl Vinson Battle Group Challenge Softball Tournament begins at 1 p.m. Sunday, with the finals set for Tuesday at 9:30 p.m.

All games will be played at Yokosuka&#8217;s Main Softball Field.

The tourney ends at 7 p.m. Monday as the Reactor Team takes on the Kitty Hawk.

The 5-K Run begins at 9 a.m. Tuesday at Thew Gymnasium.