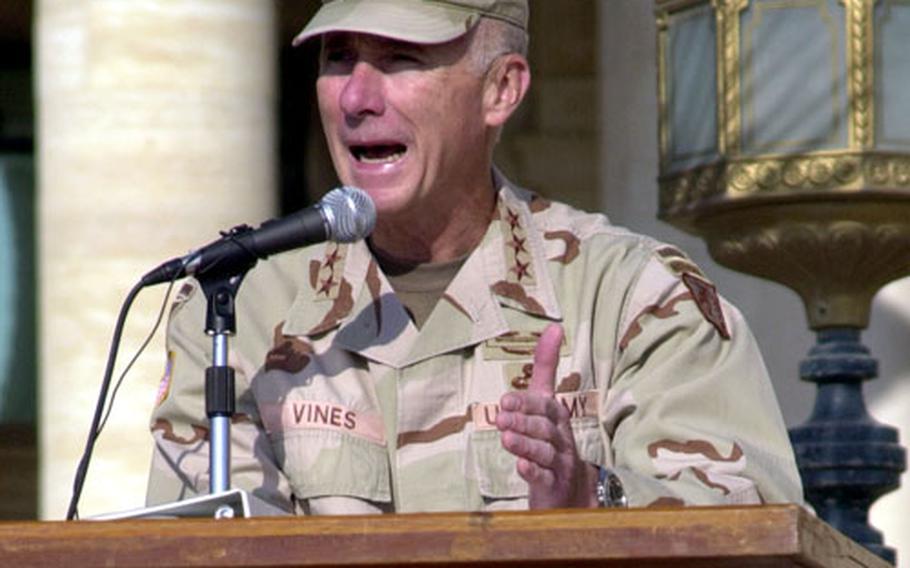 At the change of command ceremony last month, Lt. Gen. John Vines speaks last month at a ceremony to hand the reins of Multi-National Corps-Iraq to Army Lt. Gen. Peter W. Chiarelli at a ceremony at Al Faw Palace. On Tuesday, Vines cautioned that building Iraqi security forces and not other government agencies could set conditions for a military coup after a U.S. withdrawal from Iraq. (Joe Giordono / S&S)

WASHINGTON &#8212; The former commander of Multi-National Corps-Iraq said Tuesday that U.S. agencies other than the Defense Department need to be more engaged in Iraq if that country is to succeed in rebuilding.

Lt. Gen. John Vines, speaking before a Defense Department conference on military health, praised the work of Defense Department personnel in Iraq but said there is &#8220;far less cooperation&#8221; between other U.S. agencies and their Iraqi counterparts.

&#8220;We have to develop capacities in these other ministries for the government to be coherent,&#8221; he said.

After his speech, Vines would not say that the lack of cooperation is jeopardizing Iraq&#8217;s security progress, only that all U.S. officials must stay focused on succeeding in Iraq and that coalition forces are progressing in training their Iraqi counterparts.

Vines said the Iraqi security forces now number just under 224,000, up about 8,000 from Defense Department estimates in late December. Only one of the 154 brigades organized so far are capable of operating without coalition assistance, but that all but 15 are participating in security operations on some level.

But Vines said those numbers alone lack context, because they don&#8217;t speak to the strides the Iraqi army and police forces have made in just the last few months.

He also added that more troops are needed to stabilize the country, but &#8220;we need more Iraqi troops, not more U.S. troops.&#8221;

Vines said officials continue to be concerned with the possible infiltration of the Iraqi brigades by insurgents, but that the situation is improving. A greater concern is the potential for corruption, especially when it comes to the country&#8217;s oil reserves.

&#8220;There are not many ways to legally make money when oil flows from a wellhead to a ship at sea, because the government controls all of that,&#8221; he said.