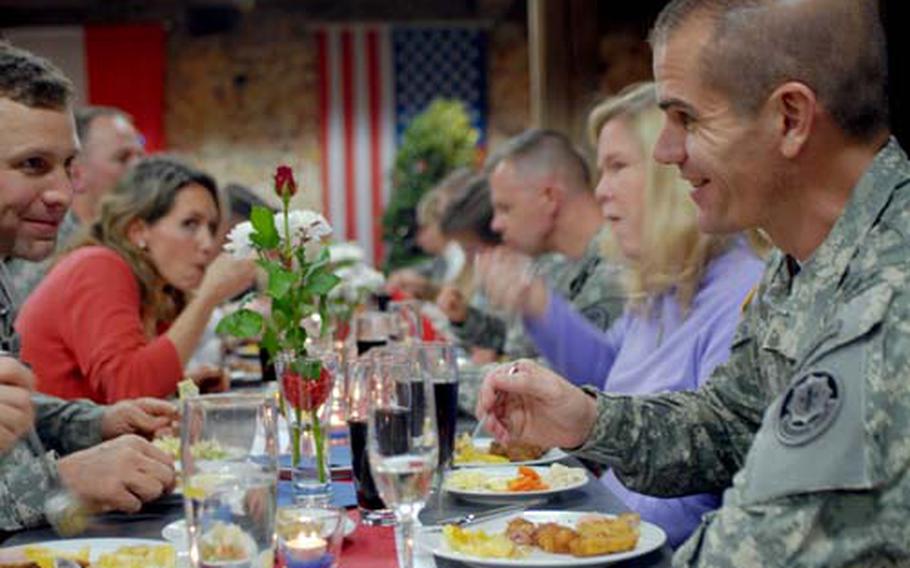 Uniformed Stryker soldiers and well-dressed spouses mingled with local community leaders and German soldiers before sitting down to a hearty meal at the 1,200-year-old castle in downtown Vilseck.

Vilseck mayor Hans-Martin Schertl told the leaders he regards members of the unit as citizens of his town.

"While you were deployed to Iraq, only a few soldiers were on the streets. Now the picture has changed and the soldiers and their families are back in our city," he said.

Vilseck has hosted many U.S. military units over the years, including soldiers who deployed to the Gulf War, Afghanistan and Iraq, he said.

"Now it is 2nd Cavalry Regiment soldiers going to deployments to make sure we have peace, freedom and democracy worldwide," he said.

Stryker families left behind in Vilseck had a tough wait for the soldiers to return, Schertl said.

"They worried if Dad or Mom would come back home safe without any injuries or even be killed," he said.

Schertl paid tribute to 25 members of the unit killed in action in Iraq, adding that the city of Vilseck has donated two benches to be placed next to an on-post memorial dedicated to the fallen soldiers.

One of the 2nd Cav leaders at the castle, Command Sgt. Maj. Mark Morris, 40, of Savannah, Ga., said it felt good to be welcomed home by the Germans.

"There is no better feeling when you can bring the soldiers back home to enjoy time with their families and relax from the stresses of Iraq," he said.

His German wife, Marion, agreed it was a tough wait for the Strykers to come home but added that there was a lot of support for spouses in Vilseck.

Marion Morris could have stayed with her family, who live near Kaiserslautern, while her husband was downrange but said she chose to stick with the other Stryker spouses in Vilseck.

"We have had big support from the community here. We stuck together and hung out together. It was good being here with women going through the same stuff. Sometimes better than with your own family," she said.

Another Stryker leader at the dinner, Command Sgt. Maj. Everett Clark, 40 of Memphis, Tenn., said his friends and family will get a kick when they hear about his castle visit.

"It (Dagstein Castle) is not like a castle with a drawbridge like you see on television but of course we will tell our family that we had dinner in a castle and the picture they get will be great," he said.

Ceremonies to honor fallen members of the regiment and welcome home the troops will be held Tuesday at Vilseck&#8217;s Memorial Fitness Center from 10 a.m. to 1.30 p.m.