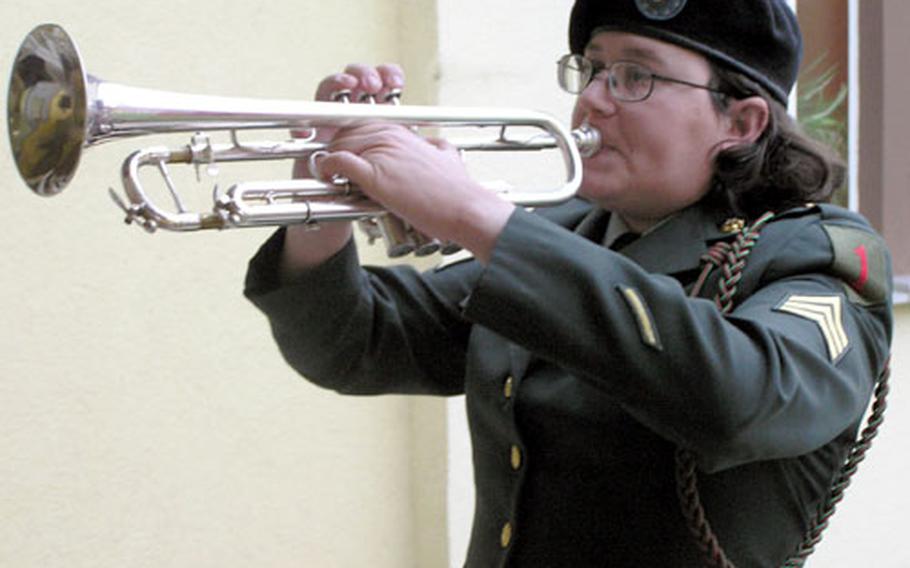 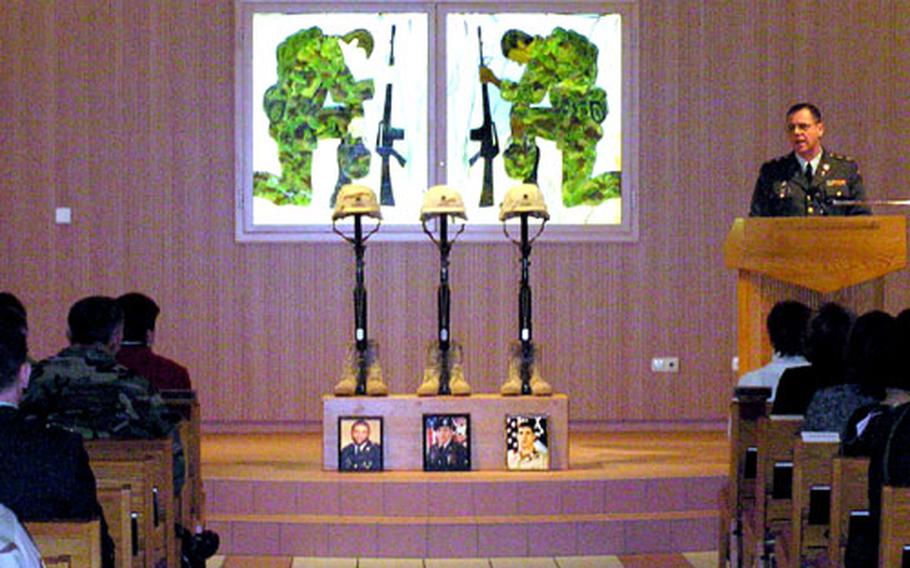 The Rose Barracks community in Germany honored three fallen soldiers in a memorial service at the Vilseck Chapel on Thursday.

The third soldier, Spc. Erik W. Hayes, 24, of Cascade, Md., died Monday in Al Miqdadiyah, Iraq, when a roadside bomb detonated near his military vehicle. He was assigned to the 2nd Battalion, 2nd Infantry Regiment.

Bryant died Nov. 20 in Muqdadiyah when the bomb hit his convoy, which was then hit by a rocket-propelled grenade attack. He was assigned to the 3rd Brigade Fire Support Team (1st Battalion, 6th Field Artillery Regiment).

Martinez-Luis died Sunday in Baqouba, Iraq, when his five-ton vehicle rolled over and pinned him under water. He was assigned to the 201st Forward Support Battalion.

Fellow soldiers and leaders described the three as dependable and well respected among their peers.

&#8220;When I first met [Bryant] during the rotation, there was something about his enthusiasm and smile,&#8221; Anderson said in the Iraq memorial service.

&#8220;It was contagious and infectious to all those who came in contact with him. He was a premier junior noncommissioned officer who clearly distinguished himself by graduating on the commandant&#8217;s list during the Primary Leadership Development Course.

&#8220;As we congregate &#8230; to celebrate the life of [Bryant], I must share with you that my heart is no longer filled with denial, anger and guilt. My heart is filled with the joy and admiration to have been blessed to know Sergeant Bryant, blessed to have walked and talked with him &#8230; . He was a man of God, a beloved husband, a devoted father a loving son and brother, a friend to you and I and a fallen American hero.&#8221;

Bryant is survived by his wife, Kiona; son, Keshawn; parents, Linda and Jack Bryant; and two sisters, Jennifer and Denie.

&#8220;Martinez worked in B Company&#8217;s command post as a [nuclear, biological and chemical] NCO, and he was the go-to NCO for many tasks that were required to make the company run,&#8221; Mitchell said during the service in Iraq.

&#8220;On Sunday, he was asked to transport soldiers to [Logistics Support Area] Anaconda for R&R leave. I think it is harder for us to accept his death because he died in an accident.

&#8220;There is no enemy to blame. We should take solace in the fact that he died in service to a noble cause. He came here, making selfless sacrifices, with the simple notion that all peoples in all nations have a right to live in a world free from tyranny, with the conviction that some principles in life are worth dying for.&#8221;

Martinez-Luis is survived by his mother, Alba Luis, and brother Ulysses.

Lummer said he spoke with Hayes&#8217; family, in Maryland, and fellow soldiers in Iraq.

&#8220;They talk of his selflessness and stress-free attitude,&#8221; Lummer said. &#8220;His confidence that inspired respect, and his smile that inspired trust. His leaders speak of his hallmark ability to take on the toughest jobs, find a solution and make things work, despite all odds. His leaders and peers alike all express their deepest, most heartfelt sorrow at his untimely departure from their ranks.&#8221;

Hayes is survived by his fianc&#233;e, Nicole Thaler, and parents Douglas Hayes and Debora Reckly.