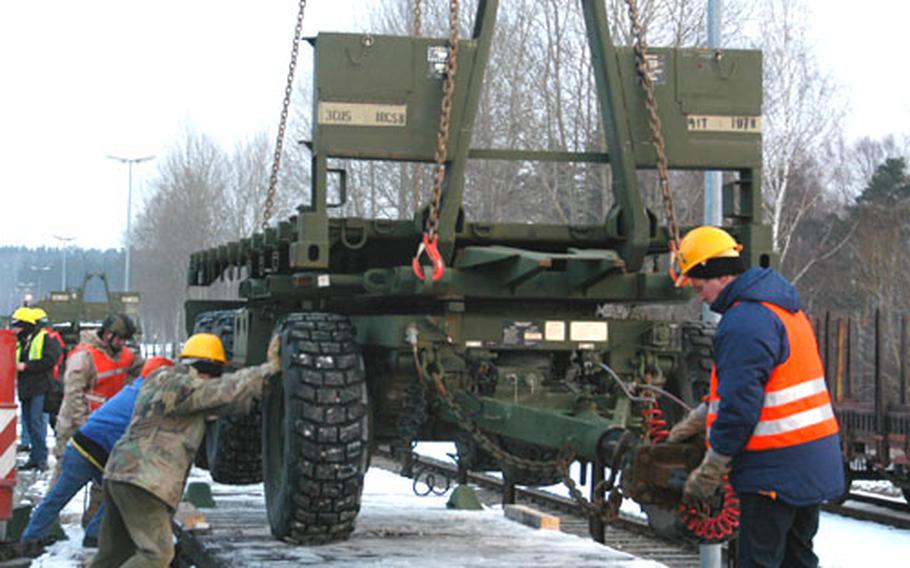 Workers at the Vilseck military railhead position the back chassis of a Palletized Load System truck on a rail car Wednesday as the specialized vehicles of the 41st Transportation Company were sent on the first leg of their journey to Iraq. The 41st soldiers will be reunited with their vehicles in Kuwait in March. (Ben Murray / S&S)

Workers at the Vilseck military railhead position the back chassis of a Palletized Load System truck on a rail car Wednesday as the specialized vehicles of the 41st Transportation Company were sent on the first leg of their journey to Iraq. The 41st soldiers will be reunited with their vehicles in Kuwait in March. (Ben Murray / S&S) 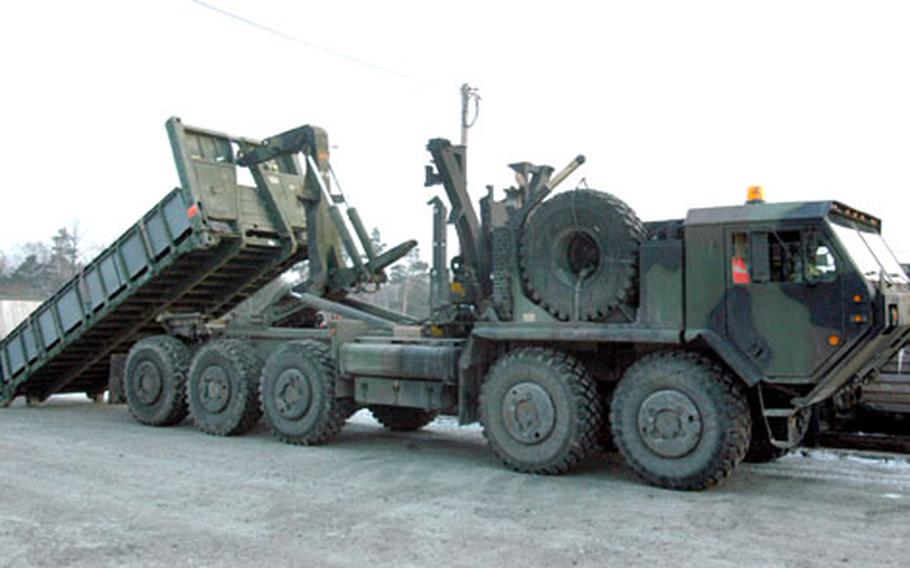 One of the trucks drops off some supplies to be sent with a trainload of the vehicles. The specialized cargo trucks can load and unload their own containers in less than a minute. (Ben Murray / S&S)

VILSECK, Germany &#8212; In a sign that the 41st Transportation Company (Palletized Load System) is fast approaching its second yearlong deployment downrange, members of the unit sent the company&#8217;s signature vehicles on the first leg of their journey to Iraq on Wednesday at the Vilseck military railhead.

Though the approximately 140 soldiers of the 41st won&#8217;t leave Germany for several more weeks, the unit needed to get its 10-wheeled cargo trucks on the way so it can pick them up in Kuwait in March.

Once in the region, the unit will spend another year shuttling supplies around Iraq in a mission troops said they are more prepared to execute safely the second time around.

The convoy drivers were forced to come up with methods on the fly to avoid hazards posed by Iraqi insurgents in the last deployment, learning on the job how to maneuver a successful convoy, he said.

Before returning from its first deployment a year ago in March 2004, the 41st drove nearly a million miles to bases all around Iraq, hauling everything from live ammunition to soccer balls for Iraqi children, said the company&#8217;s rear detachment commander, 1st Sgt. Stacy Pennington.

While on the road, the convoys were attacked a number of times with makeshift bombs &#8212; which the military calls improvised explosive devices, Cardona said.

The unit did not suffer any battle injuries or deaths on the initial deployment.

This time out, the soldiers are much better versed in identifying potential IEDs, said Lt. Col. Bruce Ferri from the 18th Corps Support Battalion, a parent unit of the 41st.

Since coming back, the unit has also &#8220;focused a lot of our training toward convoy survivability, soldier survivability,&#8221; and the situation on the ground in Iraq is much more &#8220;steady-state&#8221; than in the last deployment. That allows the 41st to make shorter cargo runs on an improved hub-and-spoke supply system, he said.

In 2003 and early 2004, the 41st was driving up to 700 miles at a stretch to deliver supplies in their PLS trucks, he said. The slow, bulky vehicles can lift containers onto their own beds without the aid of a forklift or crane, and can also transport pallets of supplies.

The cabs of the trucks do have armor, said a spokesman for 3rd Corps Support Command, the logistics support unit for the 41st, but they will be re-evaluated when they reach Kuwait to see if it meets new Army standards before they are sent into Iraq.