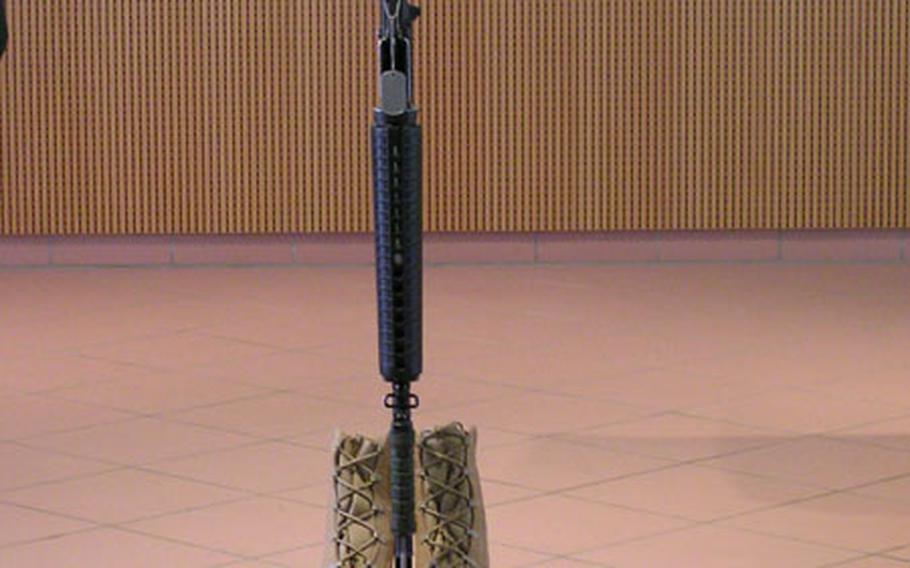 A photo of Capt. Humayun S. M. Khan stands on display Wednesday during a memorial service at the Rose Barracks Chapel in Vilseck, Germany. Khan, from the 1st Infantry Division’s 3rd Brigade, was killed by an improvised explosive device June 8 in Iraq. (Courtesy of U.S. Army)

Capt. Humayun S. M. Khan, 27, was killed June 8 in Baqouba when a vehicle packed with explosives detonated after it drove into the gate of his compound where he was inspecting soldiers on guard duty.

He was the Forward Operating Base Warhorse force protection officer.

He entered the Army in May 2000 after receiving his commission through the Reserve Officer Training Corps.

Comments read at the Rose Barracks Chapel service from his commander in Iraq, and his father, Khzir Khan, showed a soldier who loved and protected his unit just as he would his family.

Although he didn&#8217;t give specific details, Lt. Col. Daniel Mitchell, commander of the 201st FSB, said Khan prevented the car bomb from killing others.

&#8220;On [June 8], while going to the gate to supervise and make changes, he showed extreme courage as he faced the enemy, intimidating him to detonate before he could get in closer and kill or injure many others,&#8221; Mitchell said during remarks at a memorial service in Iraq. &#8220;He died selflessly and courageously, facing the enemy head on keeping him from taking the lives of others.&#8221;

Mitchell also mentioned Khan&#8217;s efforts to help the Iraqi people with an Iraqi-American sponsorship program and the development of a neighborhood watch program.

Khan will be posthumously awarded a Purple Heart and Bronze Star Medal. He is survived by his father, Khzir, and mother, Ghazala.