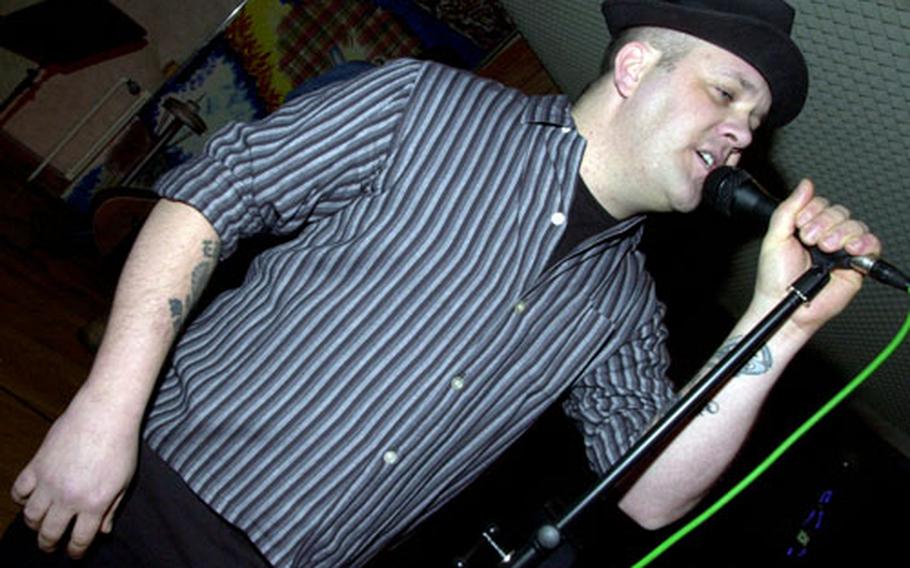 VILSECK, Germany &#8212; Elvis is not the only musician to put a promising career on hold to serve overseas with the U.S. Army.

Capt. Wayne Keeler, a singer with German-American blues band Second Hand Mojo, announced at a concert in Vilseck on Saturday night that he would leave the band for a yearlong deployment to Iraq.

&#8220;Without sounding fatalistic, this is sort of my swan song,&#8221; said Keeler, who will deploy to Baghdad this week with the Joint Multinational Training Command&#8217;s Special Police Transition team.

It&#8217;s not the first time the 37-year-old Kalamazoo, Mich., native has put his music career on hold to serve his country. In 1991, Keeler left his old band, G-Whiz, to join the Army Reserve, moving to the regular Army two years later.

G-Whiz was part of the new wave of skate-punk music and played support to bands such as Green Day, The Offspring and No Doubt. The band released three albums &#8212; G-Whiz, Angel Your Hair Looks Good and The G-Whiz Weight Loss Plan &#8212; as well as a German compilation, Keeler said.

Second Hand Mojo &#8212; a blues cover band that includes U.S. and German civilians &#8212; got its name because most of its members are in their second life in bands, he said.

On stage at Vilseck&#8217;s Yesterdays club, Keeler bounced around energetically, feeding off the other performers&#8217; energy and bantering with the crowd.

The crowd included several members of the SPiTT team.

Staff Sgt. Robert Bruton, 36, of Weatherford, Texas, said he expected Keeler&#8217;s singing and wise-cracking, often in a fake Irish accent, to keep morale high among team members when in Iraq.

Keeler said he was sad to leave his band but that he would keep the music going in his head during the mission.

&#8220;The Army rocks wherever it goes,&#8221; said the singing soldier, who plans to share his music with the Iraqis.

On a previous Iraq tour with the 1st Armored Division, Keeler said he met many Iraqis who wanted to learn about the latest American music.

&#8220;Because of the sanctions they were living in a vacuum about what really goes on in the States. They were really interested to learn about music,&#8221; he said.

Skateboarding is an important influence on Keeler&#8217;s music. For his last gig in Germany he wore a 20-year old sweater full of holes from a skateboarding accident.

&#8220;When I was in Iraq last time I built a skateboard half-pipe and bought a skateboard on the Internet. The other soldiers were right into it. Some of them bought skateboards online and we started a skateboard club.