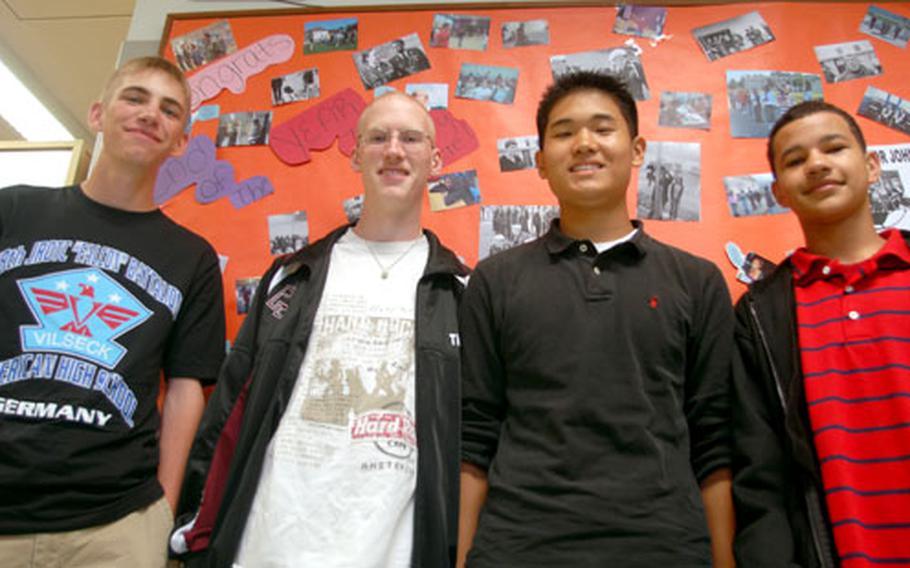 From left, Junior ROTC members from Vilseck, Germany, Daniel Lonowski, 16; Tim Ray, 16; John Lee, 15; and Dominique Smith, 15, are part of a team that won admission to the George C. Marshall Leadership Symposium in Lexington, Va., this fall. Lee and Smith are alternate members of the team. Members not shown are Stephen Newbauer, 17, and Nolen Stark, 16. (Seth Robson / S&S)

VILSECK, Germany &#8212; A team of Vilseck High School Junior ROTC cadets will travel to Lexington, Va., to learn leadership skills after beating more than 1,000 other teams vying for inclusion in the George C. Marshall Leadership Symposium.

The Vilseck team of four students is the only Department of Defense Dependents Schools team to gain admission to the Oct. 9-14 symposium.

The event brings together 38 JROTC teams from all over the world to study leadership principles espoused by Marshall, who was America&#8217;s first five-star general, Army chief of staff during World War II and a recipient of the Nobel Peace Prize.

The team, which includes two alternates, studied Marshall&#8217;s philosophy before taking a test that involved reacting to scenarios designed to test their leadership abilities.

The team&#8217;s solution was to talk to the problem squad member in private, Ray said.

The symposium will teach different leadership styles, he said.

One of Marshall&#8217;s lessons is to &#8220;teach subordinates to take your place because they will take your place and surpass you one day,&#8221; said Ray, who will be joined at the symposium by teammates Daniel Lonowski, 16; Stephen Newbauer, 17; and Nolen Stark, 16. The alternates are Dominique Smith, 15, and John Lee, 15.

Lee said his study of Marshall&#8217;s philosophy taught him that leaders must know themselves and seek self-improvement.

Team members who go to the symposium will bring back the lessons they learn to the rest of the Vilseck Junior ROTC battalion, said Lee, who plans to study at the U.S. Military Academy at West Point.