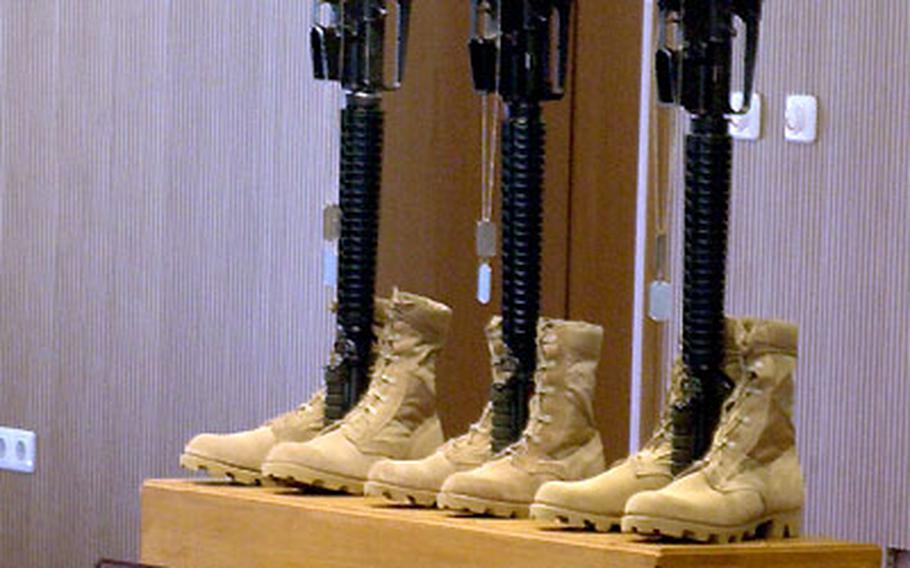 Boots, rifles and helmets are displayed on a podium in front of photographs of the three fallen soldiers. (Kevin Young / Courtesy of U.S. Army)

Boots, rifles and helmets are displayed on a podium in front of photographs of the three fallen soldiers. (Kevin Young / Courtesy of U.S. Army) 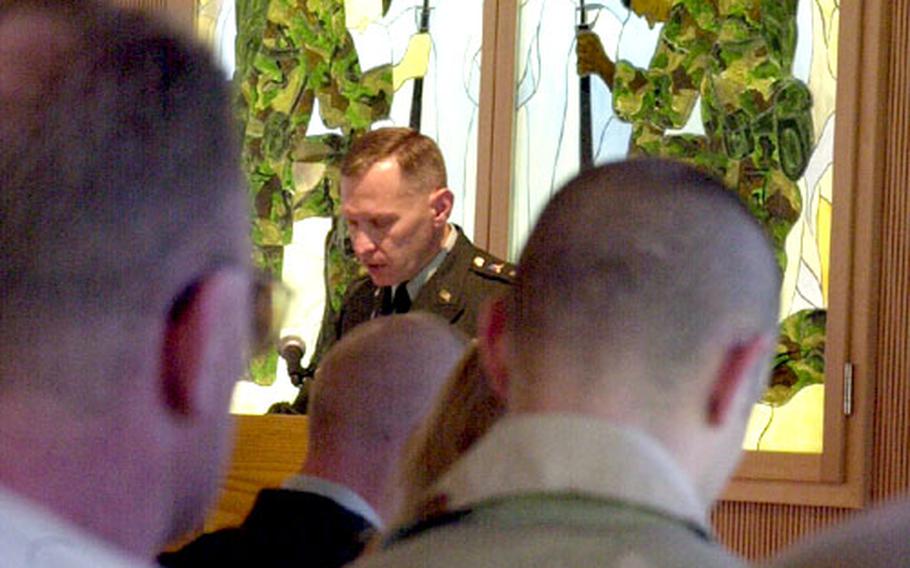 With the salute of gunfire and the mournful tones of taps, the community of Vilseck, Germany, said goodbye Tuesday to three of its soldiers lost in combat.

Vandayburg, 20, graduated in 2001 from high school in Mansfield, Ohio, where he played varsity baseball and golf, according to the Mansfield News Journal.

After basic training that year, he was assigned to the 2-2 Infantry. Like the other two soldiers, he returned home last July from a nine-month tour in Kosovo, then began training almost immediately for the Iraq rotation that began in February.

Vandayburg had just been promoted to the gunner on his squad&#8217;s Bradley fighting vehicle. Lt. Col. Christopher Kolenda, the division&#8217;s rear detachment commander, said Vandayburg was providing suppressive fire after his platoon came under attack April 9 when a guerrilla fired a rocket-propelled grenade that claimed his life.

Vandayburg is survived by his father, Allen; stepmother, Chantil; and his brother, Chris. He was engaged to be married at the time of his death.

Eckhart, 25, was born and raised in Rocksprings, Texas. After enlisting in the Army, he was trained as a cavalry scout. He served with the 3rd Armored Cavalry Regiment in Fort Carson, Colo., before moving to Vilseck and the 1st ID.

Eckhart was a squad leader in Troop F&#8217;s 2nd Platoon. He was killed April 10 by hostile fire near Khalis, Iraq. He is survived by his parents, Ronnie and Terry Eckhart.

Rosales, 29, was born in Mexico, joined the U.S. Army and trained as an infantryman. He was stationed in the States and at Camp Casey, South Korea, before coming to Germany. He had earned a Ranger tab as well as the Expert Infantryman and Air Assault badges.

Rosales died April 13 when a roadside bomb exploded next to his vehicle. He is survived by his wife, Sandra, and a son, Victor Gabriel.

All three men were posthumously awarded the Bronze Star Medal and the Purple Heart. They are the first three 3rd Brigade soldiers killed by hostile fire during the Iraq deployment. One other 2-2 Infantry soldier, Pfc. Jason Ludlam, 22, was electrocuted in an accident March 19.