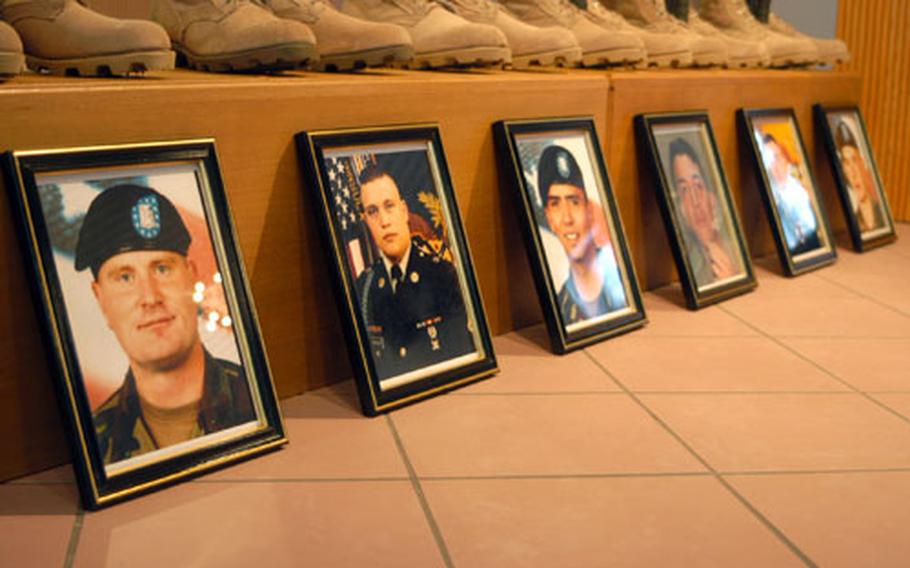 Photos of the six Vilseck soldiers killed in Iraq last week. The men were remembered in an emotional service at the Vilseck Chapel on Monday. (Ben Murray / S&S)

Photos of the six Vilseck soldiers killed in Iraq last week. The men were remembered in an emotional service at the Vilseck Chapel on Monday. (Ben Murray / S&S) 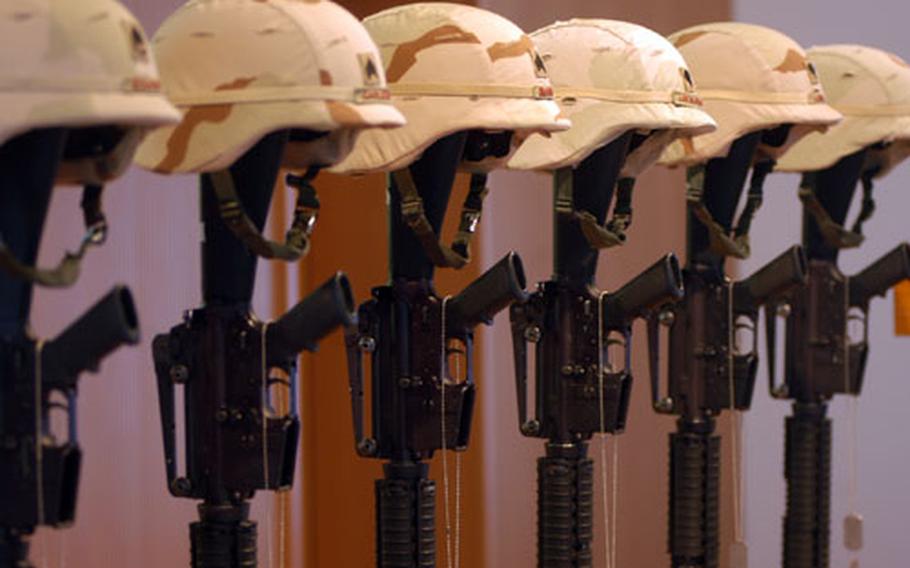 Helmets and rifles from the six Vilseck men lined the front of the community&#39;s chapel. (Ben Murray / S&S)

With many welcome home banners hung on fences along the post&#8217;s main road &#8212; for some soldiers who have returned and others that are expected to return in February &#8212; nearly 400 community members filled the chapel to honor their fallen comrades.

Staff Sgt. Joseph Stevens, Sgt. Javier Marin, Sgt. Michael Carlson, Spc. Jesus Leon-Perez and Spc. Viktar Yolkin died when the Bradley fighting vehicle in which they were riding rolled over into a canal in Khan Bani Saad, Iraq, on Jan. 24. All were members of the 2nd Battalion, 2nd Infantry Regiment.

Capt. Jon Drake, now the rear detachment commander for 82nd Engineer Battalion, spoke about the five 2-2 Infantry soldiers whom he commanded while in Iraq last year.

Stevens, 26, from Massachusetts, joined the Army in March 1998. He served as an infantry team leader, a Bradley fighting vehicle gunner and Bradley commander.

Marin, 29, from Michigan and Texas, joined the Army in September 1999. He served as a rifleman, machine gunner, Bradley driver and infantry team leader.

&#8220;Sgt. Javier Marin was a true silent professional,&#8221; Drake said. &#8220;There were times when I had to order him to speak. Javier was always focused on his men and the mission.

Carlson, 22, grew up in St. Paul, Minn. He joined the Army in May 2001. He was a radio telephone operator, grenadier and machine gun operator.

Perez, 20, was born in Mexico but grew up in Texas. He joined the Army in June 2003 and served as a Bradley driver.

&#8220;Jesus was young and it showed,&#8221; Drake said. &#8220;But that did not stop him from completing any mission. He demanded perfection from himself and his peers and stood proud when his superiors complimented their efforts ... &#8221;

Yolkin, 24, was Ukrainian but grew up in Minsk, Belarus. He later lived in Spring Branch, Texas. He joined the Army in January 2003. He was a combat vehicle driver and rifleman.

&#8220;Viktar was very proud of his heritage and quick to correct you if you called him Russian,&#8221; Drake said. &#8220;Viktar was quiet and shy, but once he started talking about his family, he was bursting with pride and joy. He was the kind of soldier everyone wanted, quiet, did not complain, tough and carried out tasks with ease. Viktar, we miss you.&#8221;

&#8220;The people I have talked to commented on (Luna&#8217;s) lightheartedness and selflessness,&#8221; said Capt. James Marks, 2-2 Infantry. Marks read a letter from some of the soldiers who worked with Luna in Iraq. One of them was addressed to Luna&#8217;s wife, Stephanie, who was at the service Monday.

Finally, Chaplain (Lt. Col.) Paul Kauffman, 2-2 Infantry and 3rd Brigade Combat Team chaplain, spoke about how the community could cope with the loss of the six soldiers.

He said the tears of grief, memories of the soldiers and faith could help the community with the tragedy.

&#8220;People of faith know that neither insurgents, nor deep waters nor tragic accidents are the end of the story.&#8221;