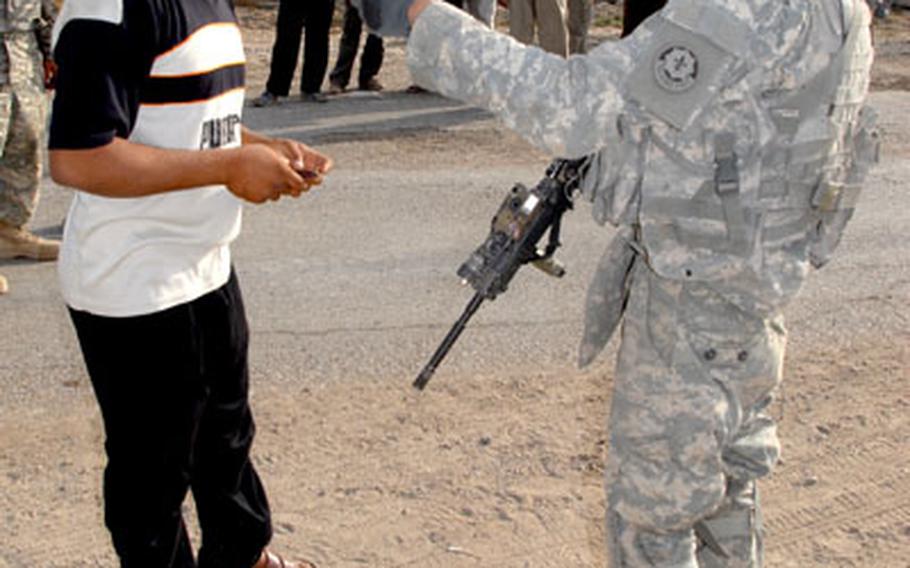 BAGHDAD &#8212; Soldiers from Company D, 2nd Squadron, 2nd Cavalry Regiment were on the lookout for suicide bombers when they set up checkpoints on the outskirts of Baghdad at the crack of dawn on Monday.

The company mans Combat Outpost Aztec, one of the many small bases established as part of the Army&#8217;s &#8220;surge&#8221; strategy that has restored a measure of security to the Iraqi capital in recent months.

Two and a half months into the 15-month mission, the unit says it has cleared virtually all insurgents from its area of operations &#8212; a 50-square-kilometer patch of semirural land just south of Baghdad International Airport and the Green Zone.

The lines of young Sunni locals who showed up at COP Aztec on Monday morning to volunteer to guard critical infrastructure in the neighborhood were evidence that Company D is winning the battle for hearts and minds here.

But the fact that suicide bombers have struck Iraqi security volunteers so many times in the past encouraged troops to block traffic from roads leading to Aztec and check passing pedestrians and cyclists closely.

One of the soldiers manning the checkpoints was more aware of the danger than most.

Spc. Noel Gaulard, 22, of Bryan, Ohio, was shot in the shoulder during a patrol shortly after he arrived at Aztec.

&#8220;We were walking down a road back that way. We got about 250 meters down the road and started taking fire. When I ran to take cover and fire back, a bullet caught me in the shoulder and went straight through,&#8221; Gaulard said.

The assailants, who were in a vehicle, escaped before the young soldier could return fire and Gaulard was left with a nasty scar in the middle of an Iron Cross tattoo. But the wound was superficial and he was quickly back to duty.

Getting locals to guard their neighborhoods is a formula that has dramatically cut violence in Anbar province to the point where places like Fallujah and Ramadi have gone from being the most dangerous places in Iraq to the most peaceful. Now the strategy is being extended to other parts of Iraq, Willig said.

So far, about 300 Iraqi CIS volunteers have been screened and 100 are manning three checkpoints to stop al-Qaida bringing weapons into Baghdad through the neighborhood. The goal is to employ 276 guards to run seven checkpoints in the area 24 hours a day, Willig said.

The CIS volunteers provide their own weapons and are not an official Iraqi government security force. They are paid $10 a day ($15 for a shift supervisor), he said.

When the volunteers reached Aztec&#8217;s entry gate they were searched twice before they were allowed on post.

Soldiers used cameras and eye-and-fingerprint scanners to enter them into a biometric database that the coalition uses to stop insurgents infiltrating security forces.

Most of the CIS volunteers are members of the Jabouri tribe and led by a former Iraqi army general &#8212; Mustafa Kamel Shebeb al-Jabouri &#8212; who claims he&#8217;s been fighting al-Qaida with a force of 2,500 men for two years.

&#8220;We don&#8217;t use a lot of indirect fire these days so I keep busy looking after civil affairs and information operations,&#8221; said Fallon, who is on his second Iraq tour.

Most locals just want to rebuild their country, he said.

&#8220;People are just tired of the violence. They have had enough already. They want to help out to get their country stabilized,&#8221; Fallon said.