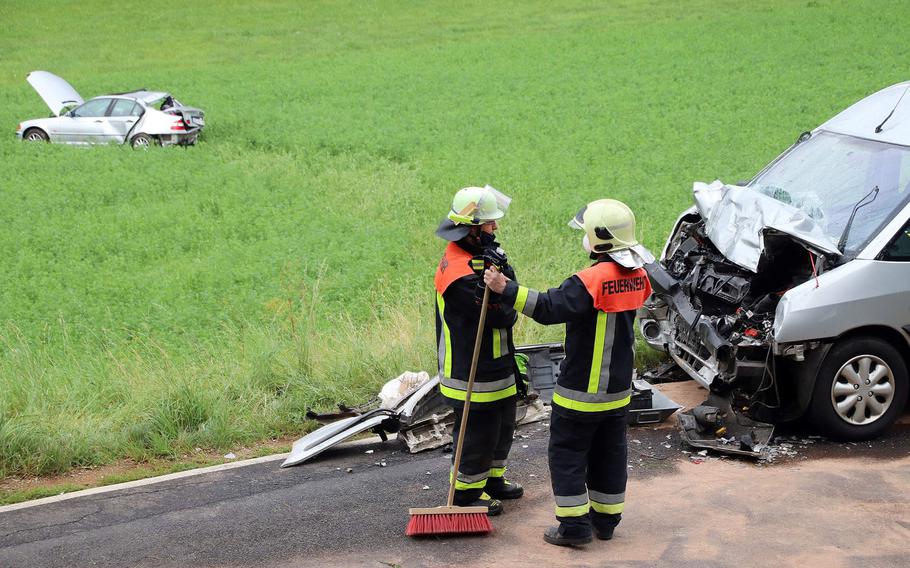 The BMW belonging to a Vilseck-based soldier ended up in a field after skidding and slamming into a Citroen carrying a family of three on a Bavarian country road on Aug. 4, 2020. The soldier and two adults in the Citroen were injured slightly in the accident, but a baby was unharmed, German police said. (Juergen Masching)

The BMW belonging to a Vilseck-based soldier ended up in a field after skidding and slamming into a Citroen carrying a family of three on a Bavarian country road on Aug. 4, 2020. The soldier and two adults in the Citroen were injured slightly in the accident, but a baby was unharmed, German police said. (Juergen Masching) 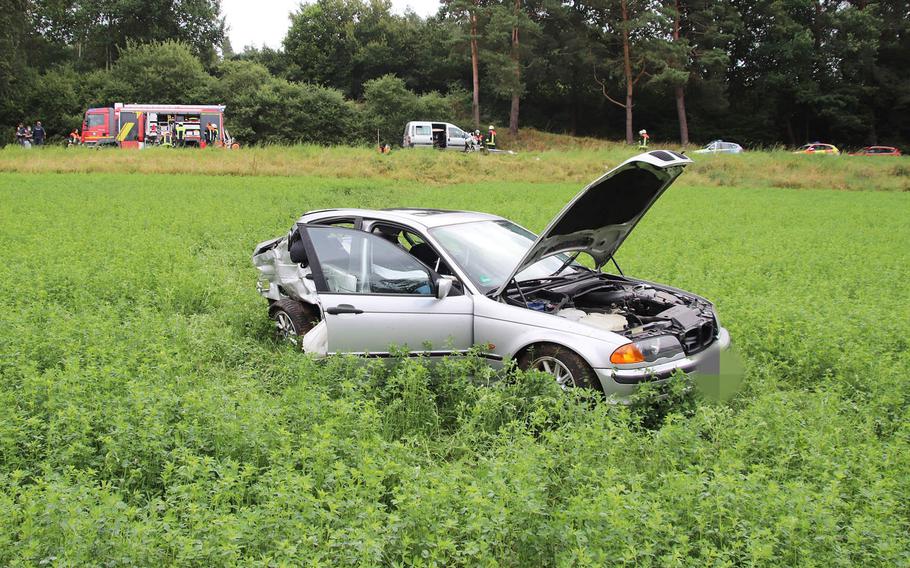 An American soldier's BMW was totaled in an accident on Tuesday, Aug. 4, 2020, on a country road in Bavaria. The soldier could face criminal charges for the accident, which he is accused of causing. (Juergen Masching)

GRAFENWOEHR, Germany — A Vilseck-based American soldier could face up to three years in prison after he was accused of causing a traffic accident on a Bavarian country road in which he and a couple were injured, German police said Wednesday.

The 20-year-old soldier and a couple in the vehicle he smashed into were only slightly injured in the accident Tuesday morning, but both vehicles were totaled, the police in Auerbach, the town closest to where the accident happened, said in a statement.

The couple’s 1-year-old child, who was taken with the parents to a clinic in the town of Pegnitz, was not injured in the crash, the statement said.

“It looks like the cause of the accident was speeding,” said Auerbach policeman Benjamin Hoerl.

“There were no indications that alcohol or drugs were involved,” Hoerl said. He did not specify how fast the soldier was driving when he smashed into the family’s Citroen.

The Vilseck-based 2nd Cavalry Regiment was “aware of an accident involving a service member driving his personally owned vehicle off the installation,” said spokesman Maj. John Ambelang, without going into detail.

“The soldier is in good condition following his release from the hospital,” Ambelang said.

German authorities did not name the soldier, in keeping with privacy laws, nor did the 2nd Cavalry Regiment.

The soldier could be charged with causing negligent bodily harm, the police said. The charge carries a sentence on conviction of up to three years in prison or a fine.

Auerbach police said the American was driving too fast as he entered a right turn on a country road between the villages of Gunzendorf and Ranzenthal, and veered off the road when he saw another car coming toward him.

When he tried to regain control by steering to his left, his BMW skidded and slammed into the front passenger side of the oncoming vehicle, which was carrying the family of three from Auerbach, the statement said.

The soldier’s BMW came to a halt in a field about 30 yards from the road. Its back end and the front of the German family’s Citroen were damaged beyond repair, and both vehicles had to be towed from the scene, the statement said.