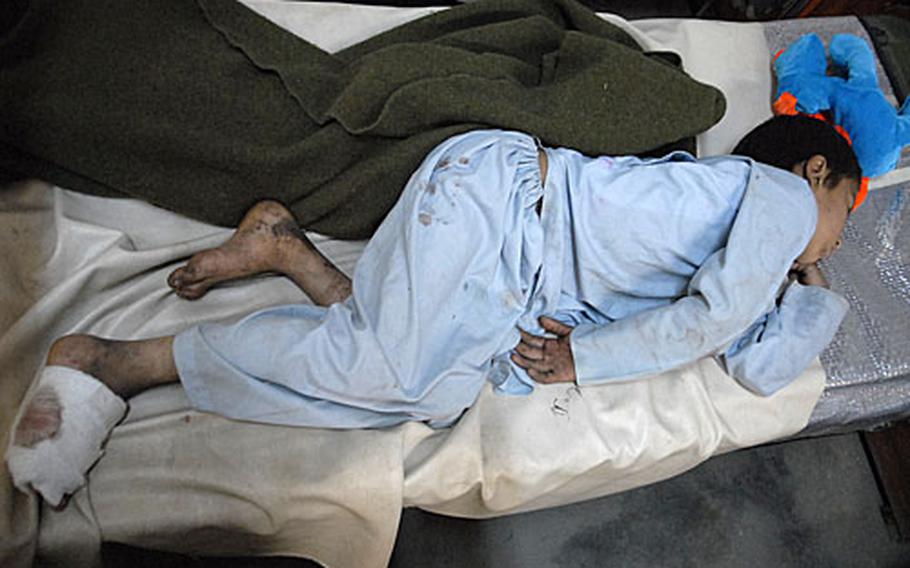 A nine-year-old Afghani boy rests at a medical facility in the U.S-Afghani military base, Camp Wright. NATO and U.S. military spokesmen, who operates within the NATO-led effort in Afghanistan, said 11 civilians had been wounded after a gunbattle between coalition and Taliban fighters. (Les Neuhaus / S&S)

A nine-year-old Afghani boy rests at a medical facility in the U.S-Afghani military base, Camp Wright. NATO and U.S. military spokesmen, who operates within the NATO-led effort in Afghanistan, said 11 civilians had been wounded after a gunbattle between coalition and Taliban fighters. (Les Neuhaus / S&S) 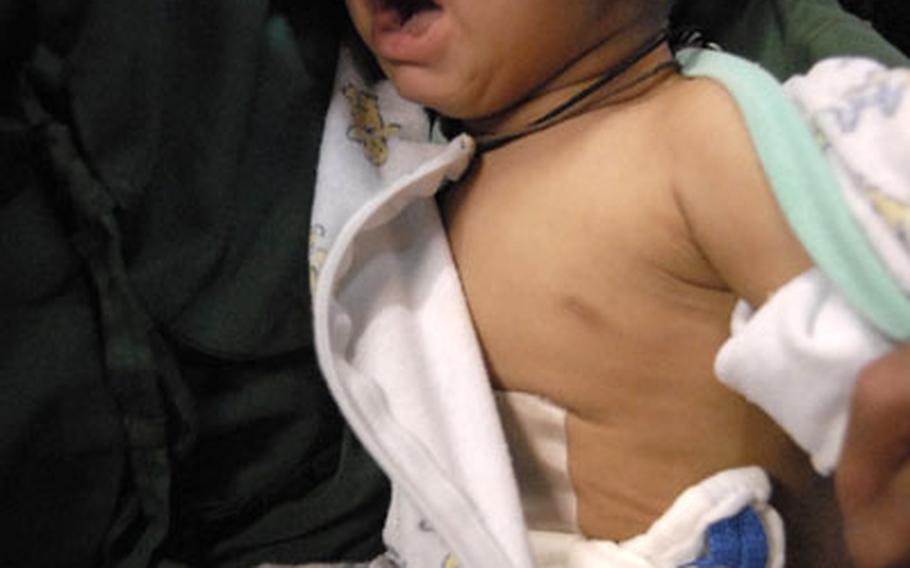 A one-year-old baby is in the arms of his sister at a medical facility in the U.S-Afghani military base, Camp Wright. Elders of the village where the incident happened said the Taliban used civilians in the village as human shields, according to a NATO spokesman. (Les Neuhaus / S&S)

U.S. Army Lt. Col. David Accetta, a spokesman for the eastern command of the NATO-led International Security Assistance Force, or ISAF, said he was not sure how they were wounded, but confirmed the incident happened in the Pech district of Kunar province.

&#8220;ISAF forces evacuated and treated 11 noncombatants, who were wounded in the area of the Korengal Valley,&#8221; Accetta said by telephone from Bagram air base.

It&#8217;s unclear how noncombatants were injured, he said.

He said eight were treated and released in field hospitals run by U.S. and Afghan forces, while three others were evacuated to an ISAF medical facility at the military base in Bagram, just north of the capital, Kabul.

An ISAF headquarters spokesman, Maj. Charles Anthony, confirmed the number and said they were wounded in the cross-fire between Taliban and ISAF forces.

Both officials said the Taliban used the civilians as human shields, a common tactic used by militants, according to the NATO officials.

He said village elders in Pech district held a shura, or consultation, with ISAF leaders to discuss the matter in depth.

According to the elders, Taliban fighters used family dwellings in the village to engage ISAF forces, said Anthony.

But relatives and four wounded who were still at Camp Wright, a U.S.-Afghan military base near Asadabad, the provincial capital of Kunar, on Sunday said they had been fired upon by coalition troops on the ground and from helicopters.

Their version could not be verified, but according to The Associated Press, the Afghan Ministry of Defense reported that one civilian was killed, along with 20 Taliban fighters.

Operation Rock Avalanche kicked off in the predawn hours of Saturday morning when a company-size unit from the U.S. Army&#8217;s 173rd Airborne Brigade, along with special operational forces, assaulted an area of the Korengal Valley via helicopters.

The valley is in the remote mountains of Kunar province, which borders Pakistan&#8217;s lawless Northwest Frontier Province.

Members of Company B, a unit with the 173rd&#8217;s 2nd Battalion, 503rd Parachute Infantry Regiment, launched the assault in an effort to kill or capture several Taliban sub commanders known to be operating in the province, according to U.S. officials.

ISAF spokesmen said so far there were no reports of killed or captured Taliban fighters, or discoveries of weapons caches.

U.S. military officials said before the operation that Air Force B-1 bombers and F-15 jet aircraft would be used to support soldiers on the ground, along with 155-mm howitzer cannons, 120-, 81- and 60-mm mortars, .50-caliber heavy machine guns and a weapon called an MK-19, which fires 40-mm grenades in rapid succession.

On July 5, paratroopers from the 503rd were involved in a 36-hour firefight with hardcore Taliban rebels, also in Afghanistan&#8217;s northeastern Kunar province, according to Capt. Louis Frketic, commander of the unit&#8217;s Company A.

Two of his men were killed that day.

According to the U.S. Department of Defense, Spc. Christopher Honaker, 23, of North Carolina, and Pfc. Joseph Miracle, 22, of Michigan, were killed after their dismounted patrol came under fire.

The gunbattle took place in the Watapor Valley near a village called Tsangar.

Four other U.S. soldiers were wounded during that battle.

Separately on Sunday, Maj. Chris Belcher, a spokesman for the U.S.-led Combined Joint Task Force 82 who works with Afghanistan&#8217;s National Army, said two other militants were killed on Sunday, also in Kunar province, after information was received that rebels were hiding in the area.

Militants opened fire on coalition forces operating in the Berkani district, and the forces fired back, killing two of them, Belcher said in a statement.

Several weapons were recovered and destroyed, according to Belcher.

The two insurgent deaths brought the weekend count for Taliban killed to nearly 60.

In the south, two days of fighting between CJTF-82 forces and Taliban extremists in Helmand province have resulted in nearly three dozen deaths, Belcher said.

More than 5,200 people have died in Afghanistan in 2007 relating to insurgent violence, according to The Associated Press.