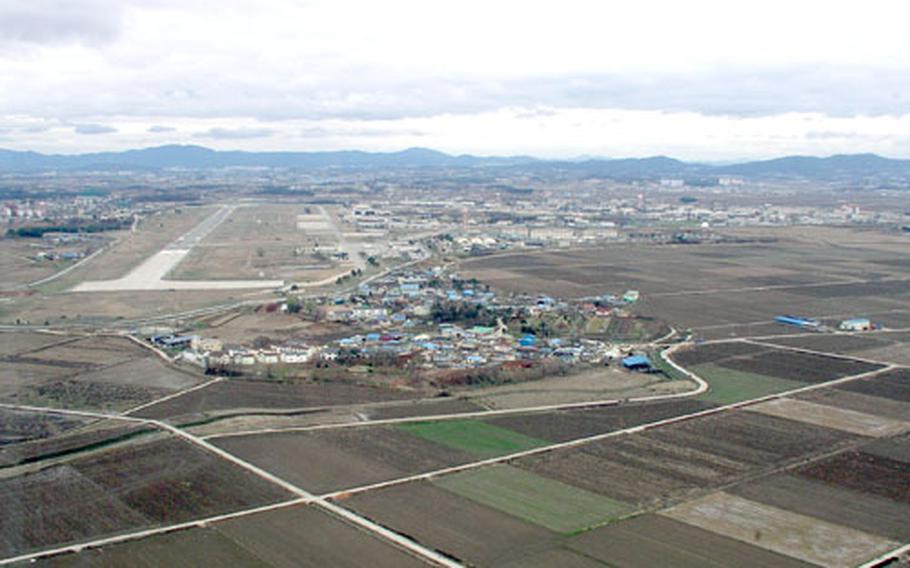 Just outside Camp Humphreys lies the village of Daechu-ri, whose farmers are resisting South Korean government efforts to evict them from the land. Daechu-ri is part of a vast tract of farmland the government purchased so that Camp Humphreys can triple in size and become the U.S. military’s main installation on the peninsula. (Franklin Fisher / S&S)

In addition, said Father Mun Jeong-hyeon, the farmers and other residents of Daechu-ri village are &#8220;on alert&#8221; in expectation that the South Korean Ministry of National Defense might deploy troops to oust them from the contested lands.

Such a move, he told Stars and Stripes in a telephone interview last week, would likely swing South Korean opinion in favor of the residents, who have vowed to resist eviction. The public would see military action as a reminder of the 1980 Kwangju Uprising in which government troops killed a large number of pro-democracy protesters, he said.

The disclosure that rice planting has gone forward heightens tensions in the ongoing standoff between the resisters and South Korea&#8217;s Ministry of National Defense.

Mun said the planting of a rice crop is significant because of a South Korean court ruling in an unrelated case, which, if applied to Daechu-ri and depending on how it might be interpreted, could block the government from disturbing the crops once the stalks grow past a few centimeters.

The ministry recently made several abortive efforts to seal off the land and thwart farmers from planting a new spring crop.

But each time, government officials backed off after resisters scuffled with police and commandeered or blocked construction vehicles. And when government workers filled several irrigation canals with concrete, then departed, resisters promptly moved in and took out the concrete.

Some resistance leaders and others remain barricaded inside the grounds of the Daechu-ri elementary school, which is just yards from the Camp Humphreys perimeter.

The South Korean government bought 2,328 acres of farmland last year to enable Camp Humphreys to eventually triple in size and become the U.S. military&#8217;s primary installation on the peninsula by 2008. The expansion is part of an agreement between the United States and South Korea.

A defense ministry spokesman declined Friday to be interviewed on any matters regarding the situation in Daechu-ri.

Thus far, authorities have relied on masses of blue-clad riot-equipped Korean National Police officers to handle anti-expansion rallies that activists have been staging since last summer.

But Mun said he is worried over recent South Korean media reports that the government may call in military forces to seize control of the land and evict the resisters. Mun cited reports that defense ministry officials have discussed having the contested lands declared a military facility protection zone.

Such action, according to the reports, would allow the defense ministry to deploy troops to the area and wrest it from the resisters.

The appearance of soldiers would be unacceptable to resisters and the general public, Mun said.

Hyun In-taek, an international relations professor at Korea University in Seoul, said Friday that the standoff leaves the authorities in a dilemma, and raises the prospect that the Camp Humphreys expansion could fall a year or more behind schedule.

The situation is made even more delicate, he said, because South Korea heads into local elections May 31.

On the other hand, said Hyun, if the government &#8220;cannot control them, then probably the whole timetable will be delayed. We are targeting that 2008 is the year that the U.S. military will move to that area &#8230; so this year could be quite crucial.&#8221;