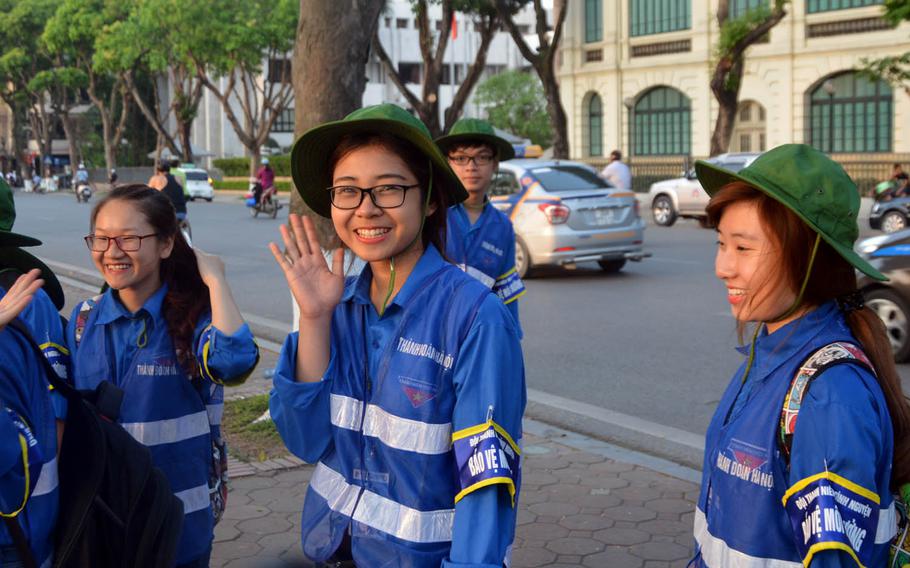 Among young people in Hanoi like Phuong Ngan Pham, 18, center, the United States and President Barack Obama remain broadly popular. Obama is the third president to visit Vietnam in the postwar era. (Erik Slavin/Stars and Stripes)

HANOI, Vietnam — The heat and humidity in Vietnam’s capital ease to tolerable levels in May around 5 p.m., when crowds of locals and tourists alike stroll the city’s colorful Hoan Kiem lakeside.

Ask residents what they think of President Barack Obama’s upcoming visit, and they’ll express emotions ranging from adoration to apathy.

Some hope Obama’s visit will encourage Vietnam’s prosperity, while others view global economic trends as a more important driver of growth. People welcome a U.S. role in balancing China, but also recognize their next-door neighbor as both a troubling adversary and a necessary partner.

Phuong Ngan Pham, 18, idolizes Obama and looks up to his oldest daughter, Malia.

For Phuong and several of her friends hanging out by the lake, the Vietnam War is a tragic history lesson that has given way to a good relationship today. Phuong, who speaks fluent English, hopes to gain a visa to study at an American university.

Obama is the third president to visit Vietnam in the postwar era, and he comes at a time when America is broadly popular here despite lingering issues linked to the war. A 2015 Pew survey found a 77 percent favorable rating for the U.S. among Vietnamese, third-highest among 40 countries surveyed.

The reconciliation formally began when the countries normalized relations in 1995.

Bill Clinton, traveling with wife Hillary and daughter Chelsea, drew jubilant crowds when he visited in 2000. The former president’s role in normalizing relations hasn’t been forgotten here, and he is credited with changing Vietnam’s perception of the U.S. from enemy to friend, if not quite an ally.

George W. Bush’s visit in 2006 for the Asia Pacific Economic Cooperation summit was received politely but considerably cooler; news accounts from the time quoted Vietnamese citizens who said the Iraq War reminded them too much of what happened in their country.

“Vietnam should be friends with as many countries as we can, and the U.S. is the strongest and the biggest,” said Nguyen Van Thiem, 60, a business owner.

Among four or five men in their 20s and early 30s outside some of Hanoi’s malls, Obama’s visit was shrugged off. Each said politics didn’t matter to them.

“If [Obama] comes or not, I’m not sure if my sales are going up,” said a store owner, who then walked away.

Some welcomed U.S. efforts to maintain peace in the region in the face of China’s militarization of South China Sea islands also claimed by Vietnam.

The Navy has repeatedly asserted its freedom to navigate in the South China Sea, despite Chinese protests.

A businessman named Hao, 44, voiced support for relations but saw limits to U.S. power. He quoted a Vietnamese proverb: The water from afar can’t cure the fire.

Vietnam’s troubles over South China Sea territory are just the latest round of tensions with China that go back to antiquity, he added.

“We can profit from America, but we live next to China,” Hao said.