Vietnamese family reconnects with sailors who rescued them 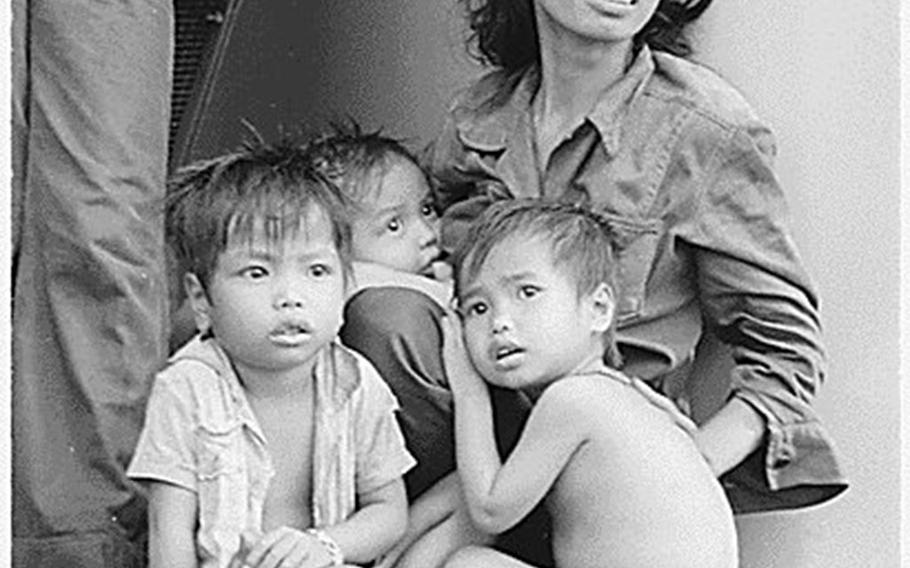 In this photo from Aug. 5, 1979, Van Ha huddles with her children, Doan Ha (in shirt), Kim Tu (sitting) and Phong Ha aboard the USS Wabash. Ha's family left Vietnam in a small wooden fishing boat and were rescued by the Wabash after three days at sea. Van and her husband, Thanh, as well as Doan and Kim, reunited with some of their rescuers Saturday in San Diego. (Courtesy Doan Ha)

In this photo from Aug. 5, 1979, Van Ha huddles with her children, Doan Ha (in shirt), Kim Tu (sitting) and Phong Ha aboard the USS Wabash. Ha's family left Vietnam in a small wooden fishing boat and were rescued by the Wabash after three days at sea. Van and her husband, Thanh, as well as Doan and Kim, reunited with some of their rescuers Saturday in San Diego. (Courtesy Doan Ha) Ray Coggins and Bud Biery listen as Helen Elstrob shows them a photo of her family and thanks them for saving her mother, Canh Do, shown standing next to her. Do was one of 28 Vietnamese refugees who were rescued by the USS Wabash on Aug. 5, 1979. They reunited with Coggins, Biery and other sailors from the Wabash on Saturday in San Diego. (Jennifer Hlad/Stars and Stripes) Ray Coggins, Thanh Ha, Van Ha, Doan Ha, Canh Do, Kim Tu and Bud Biery pose for a photo Saturday in San Diego. Coggins and Biery served on the USS Wabash and, on Aug. 5, 1979, helped rescue the Ha family, Do, and several other Vietnamese refugees in a small wooden fishing boat. Thanh Ha, who was a fisherman before serving in the South Vietnamese Army, said the group had been at sea for three days and the boat was taking on water when they were rescued. He believes they would have been dead within just a few hours if it weren't for the crew of the Wabash. (Jennifer Hlad/Stars and Stripes) 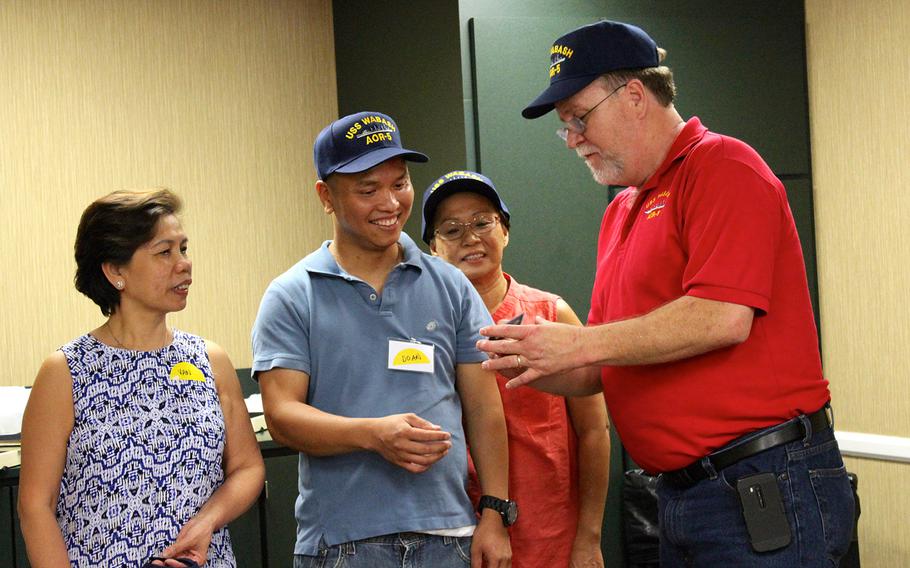 Bud Biery, right, presents Doan Ha with a membership card to the USS Wabash Association, making him an honorary member. Ha was 5 years old when he and his family fled Vietnam and were rescued by the Wabash. Ha contacted the ship association via its Facebook page, and he and Biery set up a meeting Saturday for the family members who were rescued and some of the ship's former crew members. (Jennifer Hlad/Stars and Stripes)

SAN DIEGO — Lien Nguyen joked that her husband was drifting off a bit during the second act of the musical “Miss Saigon” when the cast performed the song “Dust of Life” and photos of Vietnamese children and families were projected for the audience.

But one photo caught Nguyen’s eye and she said to her husband, “That looks just like your mom.”

Doan Ha said he instead was fixated on one of the three children in the photo: himself at age 5.

Ha has vague memories of Vietnam and knew that his family had fled in a stolen wooden fishing boat in 1979. He knew his parents, siblings and nearly 20 others in the boat were rescued by a Navy ship. He didn’t realize there were more than a dozen photos of the rescue in the National Archives.

The photo motivated Ha to find out more, and eventually to contact one of the sailors from the ship that saved him.

On Sept. 28, 35 years since the USS Wabash dropped the Ha family in the Philippines, they reunited with some of the men who rescued them.

Dangerous escape Thanh Ha was a fisherman before serving in the South Vietnamese Army. After the fall of Saigon in 1975, he returned home to Nha Trang to hide from the North Vietnamese, who were intent on putting South Vietnamese soldiers and members of the previous government into “re-education camps.”

Thanh, his wife, Van, and their young children lived in difficult conditions, always worried that Thanh would be found and sent away to be tortured. Their rickety house was on stilts because at high tide the waters of the South China Sea would rush in under their feet.

Thousands of people were leaving the country, but escaping by boat was dangerous. There was no guarantee that they would be rescued by the huge U.S. ships off the coast, and the Philippines are 800 miles away. Hundreds of people died at sea, including one of Thanh’s cousins.

Even though he knew there was only a small possibility his family would be rescued, Thanh believed they had to try. His thinking at the time, he said, was that he’d rather die at sea than be sent to a concentration camp.

So Thanh; his wife and three small children; his cousin, Canh Do; friends; and family members piled into a stolen wooden boat and set off.

Rescue at sea The USS Wabash was commissioned Nov. 20, 1971, a hulking replenishment oiler nearly 700 feet long and roughly 100 feet wide. Andy Anderson and Malcolm Slack, two of the ship’s original crewmembers, described it as a kind of “floating Wal-Mart,” taking oil and supplies to aircraft carriers and other ships during the Vietnam War and afterward.

In July 1979, the Navy told all of its 7th Fleet ships in the South China Sea to seek out refugees in the area and to do as much as possible to help them, according to an article in Stars and Stripes at the time. Navy ships picked up about 600 refugees at sea in 1978 and already had picked up 567 so far in 1979, the report said.

Aboard the Wabash, crewmembers outfitted a small room used as a lounge for first class petty officers as temporary quarters. They had no extra bedding, so they rolled bubble wrap on the floor, said then-Petty Officer 2nd Class Bud Biery, who worked in the boiler room.

On Aug. 5, 1979, Biery volunteered to help new refugees get showered and clothed, while Ray Coggins joined the whale boat sent to rescue the 28 people aboard the 30-foot wooden fishing boat.

The sea was rough that day. A storm had caused the waves to swell, and the boat carrying Thanh and his family was taking on water. The refugees had been at sea for three days and were running out of food. Though it is bad luck to speak of death on a ship, Thanh said, the group was past superstition. They believed they would be dead within two hours.

Then they saw the lifeboat and knew they would make it.

Reconnecting The Wabash performed four rescue operations, saving about 140 people. Biery said he remembers this group of 28 specifically — how, when the crew handed out small boxes of cereal and a piece of fruit to each of them, the children were excited, as though it was a huge treat.

The ship dropped the refugees in the Philippines the next day, and the crew never knew what happened to them.

Then, Doan and his wife went to see “Miss Saigon.”

The picture in the slideshow, plus turning 40 this year, prompted him to start looking for other pictures of his family.

His sister, Kim Tu, who was 3 when the family was rescued, said they had a copy of a magazine with a black-and-white photo of them on the cover but she never knew about the other photos.

When she finally saw photos in the National Archives, she felt like she was looking at her daughter’s face. In one snapshot, she said, she’s holding a box of Fruit Loops — her daughter’s favorite cereal.

Doan also began searching online for some of the sailors whose names were printed on the photos. The searches led him to a Florida surgeon, who suggested he join the ship’s Facebook group.

After he posted a thank-you to the crewmembers for helping his family, Biery had an idea: Why not arrange a reunion?

‘Like a movie’ On Sept. 28, as tourists splashed outside in the pool, Biery carefully lined up Wabash bumper stickers, a bolt and piece of metal from the ship, photos of the rescue and other memorabilia on a table in a hotel conference room.

Slack set up a laptop to show video footage he shot of the ship just before it was scrapped a few years ago. He is one of five men who were present at the ship’s commissioning and decommissioning.

Anderson said that as a plank owner, when he left the ship on July 2, 1974, the crew rang the bell and announced his name. “I stood on the pier and cried,” he said.

Biery joined the crew two years later. He said he was very moved by Doan’s note on the ship’s Facebook page, as he has often wondered what happened to the refugees.

Doan wanted to make sure they knew.

After the hugs and greetings — Thanh described it as “kind of like meeting old friends” — Doan showed a video he had produced, set to “Wind Beneath My Wings” and Mariah Carey’s “Hero,” detailing the lives the sailors had made possible.

Thanh and Van Ha had three children when they left Vietnam, and Van was pregnant with their fourth. After reaching the United States, they had two more and adopted a seventh. Thanh became an auto mechanic and Van a manicurist. Six of their children graduated from college, the seventh is in nursing school. They have four grandchildren.

Other people who had been on the boat have also been successful. Canh Do, a cousin of the Ha family who left Vietnam with them, also attended the reunion — along with her daughter and son-in-law and their baby.

Helen Elstob, Canh Do’s daughter, said she learned the details of the boat escape and rescue only recently, and it seems “like a movie.”

“I knew my mom was a strong woman,” she said, but she hadn’t realized how strong.

Doan said he went back to Vietnam in 1998 and visited the neighborhood he would have grown up in. The whole area had been told to clear out to make room for resorts just a year after the family left, but it moved only a few blocks inland and is still jammed with plywood homes on stilts.

His father, using Doan as a translator, said there are still former members of the South Vietnamese Army being held in concentration camps.

“You provided an opportunity for three generations of Vietnamese,” Doan said. “The opportunity we have today, you guys provided that.”