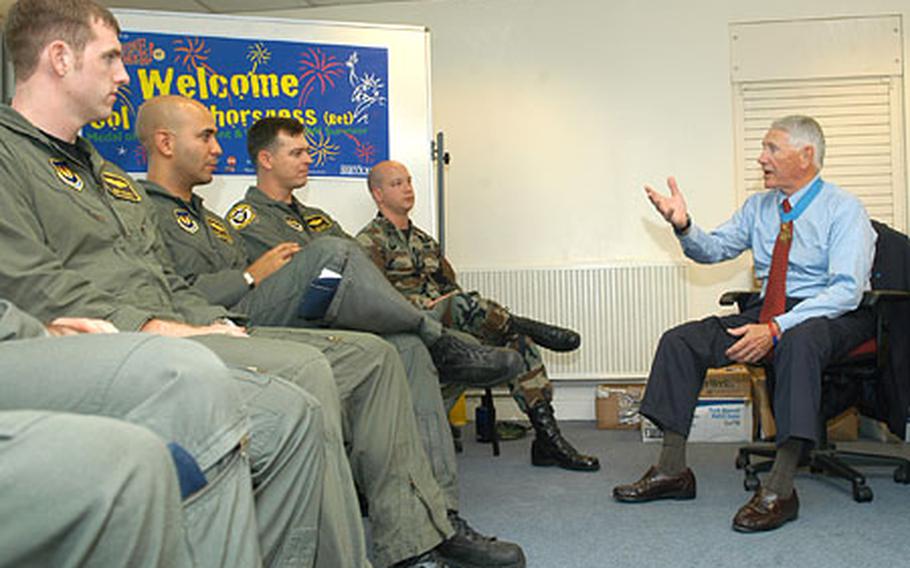 Medal of Honor recipient retired Col. Leo Thorsness shares his story and life lessons to an attentive crowd inside the RAF Lakenheath library as part of his visit to the base last week. (Sean Kimmons / S&S)

RAF LAKENHEATH &#8212; Col. Leo Thorsness had lots of time to reflect on his life when he spent six years inside the infamous &#8220;Hanoi Hilton&#8221; prison camp during the Vietnam War.

While isolated in a tiny cell, he would often communicate with fellow prisoners, quietly tapping in code against concrete walls. If any of the ruthless North Vietnamese guards overheard the messages, beatings would ensue.

After plenty of practice, Thorsness, now retired, could send at least 15 words a minute through a wall, the Medal of Honor recipient recalled to an attentive crowd gathered at the RAF Lakenheath library last week.

Besides thoughts on the war, most messages revolved around family, friends, faith and even some jokes to help pass the time. Work-related topics were at the bottom of the list.

&#8220;You have to put something in your life besides work,&#8221; said Thorsness, adding that it was a lesson he learned the hard way by being imprisoned.

The decorated F-105 fighter jet pilot, who laced his remarks with humor, offered life lessons he had learned from his disturbed past. For example, he emphasized the importance of training.

Without proper training, he could not have made it through 92&#189; dangerous &#8220;Wild Weasel&#8221; missions, evading surface-to-air missiles over Vietnam hot zones.

Thorsness, then a major, and his wingman ejected after nearly passing out from the smoke. Trouble was just beginning, though, as enemy forces started shooting at his parachute as he floated to the ground.

Unable to walk, Thorsness tried crawling away but enemy forces caught up to him, stripping his clothes off with a machete. Following interrogation, he ended up at the &#8220;Hanoi Hilton,&#8221; where he and many other American prisoners of war would suffer brutal treatment.

Torture, miserable food rations, inadequate living space and anti-American propaganda awaited those who checked in to the facility. The prison also had virtually no health care, Thorsness remembered. As a result, many prisoners used razor blades to extract their rotten teeth.

His advice to airmen deploying to combat these days: Do the right thing, especially when it comes to training.

&#8220;Know what to take seriously. In combat, the guy on your right and left depends on you,&#8221; he said following his remarks.

As far as the U.S. going down the same path in Iraq as it did in Vietnam, Thorsness suggested three options in preventing a similar outcome.

With Muslim extremists wanting to wipe out the Western world, the coalition forces would have to join the extremists, destroy them all or change them. The latter is perhaps the best option, said Thorsness, adding that Muslim women could be the key.

First Lt. Daniel Fulk, director of operations for Detachment 4, 18th Intelligence Squadron at RAF Feltwell, was one of the audience members to hear Thorsness speak.

&#8220;He was very insightful, talking about his experiences inside the camp that taught him and his fellow prisoners a lot about themselves and what&#8217;s really important in life. It makes you think twice about your priorities,&#8221; Fulk said.